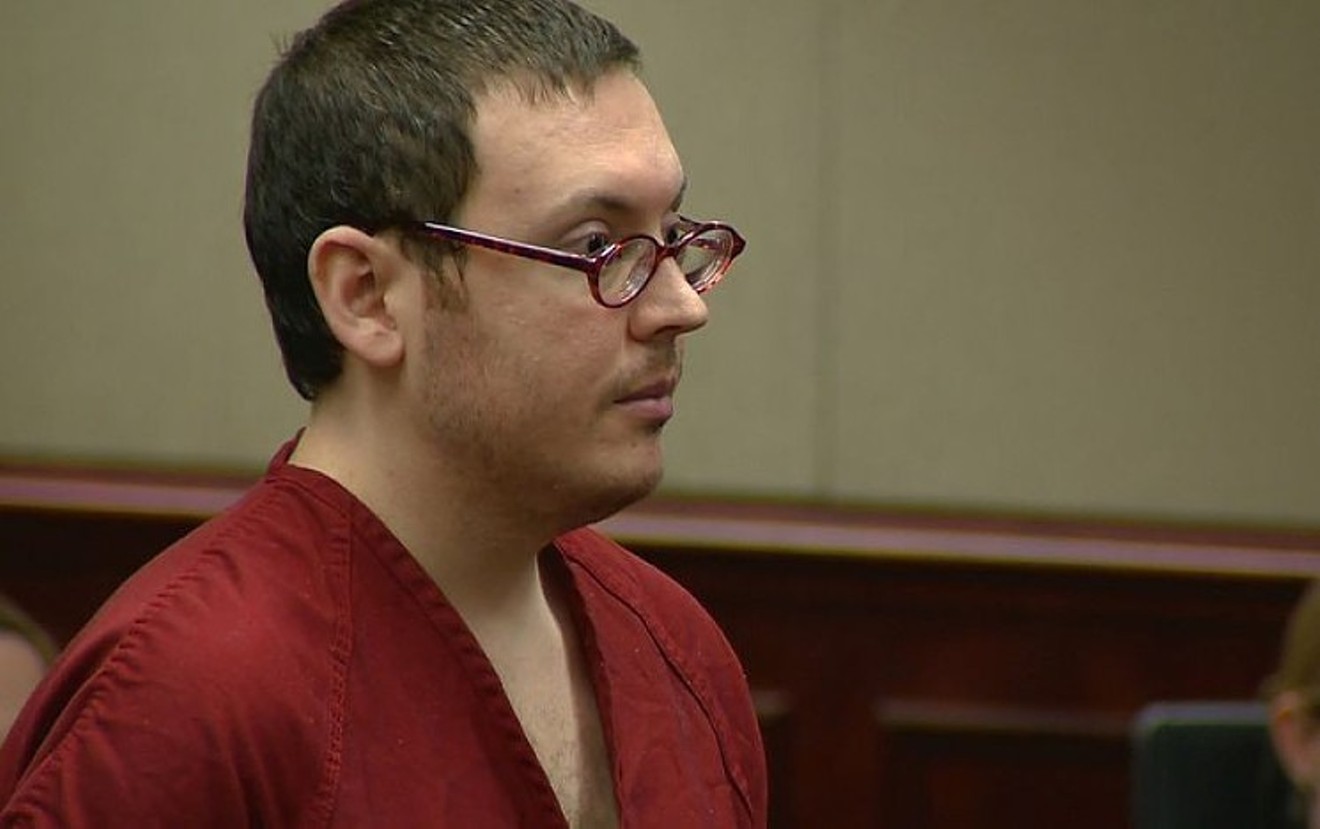 James Holmes at his 2015 sentencing. CBS4 file photo
Aurora theater shooter James Holmes has been on the move within the prison system since a 2015 attack on him by Mark "Slim" Daniels, who apologized in a letter to writer Alan Prendergast for being unable to send the man who killed twelve people and injured seventy others at the Aurora Century 16 theater on July 20, 2012, to "Satan's lake of fire." Now, for the first time in more than a year, we finally know his location. At present, he's being held at the United States penitentiary in Allenwood, Pennsylvania.

In January 2016, as we've reported, we learned that Holmes had been transferred from San Carlos Correctional Facility in Pueblo, where he'd been housed since a move from the Colorado State Penitentiary in Cañon City. At the time, officials said the shift was being made for security reasons — and they declined to say whether he was still in the state.

The following March, sources acknowledged that Holmes was no longer being held in a Colorado prison, but officials wouldn't offer up his actual location, adding an element of mystery to an incarceration that had been controversial from the jump.

Holmes was sentenced to life in prison without the possibility of parole in late August 2015 at a hearing during which Judge Carlos Samour memorably said, "Get the defendant out of my courtroom."

The following month, Prendergast reported about suggestions that Holmes was getting special treatment floated by an inmate, who wrote the following:


"Holmes has been placed in a sixteen-man pod all by himself. He gets out of his cell two hours in the a.m. and two hours in the p.m. Whenever he is out of his cell, a guard sits in a chair in front of the pod and watches him. I thought you might be interested to know the amount of resources DOC is expending on this dude. Also, it seems there is some mollycoddling going on since most people with notorious/high-profile crimes would just be put in restrictive housing until they could be integrated into Management Control Unit status."

At that time, DOC spokeswoman Adrienne Jacobson confirmed that Holmes was housed at CSP in a management-control unit — the term that's replaced phrases such as "administrative segregation" or "solitary confinement." She added that his isolation was "'partly a function of the number of empty beds at CSP now,'" Prendergast wrote. "'The facility has an operational capacity of 756 beds but currently has only 620 occupants.'"

Then, in October, Holmes was attacked by Daniels. 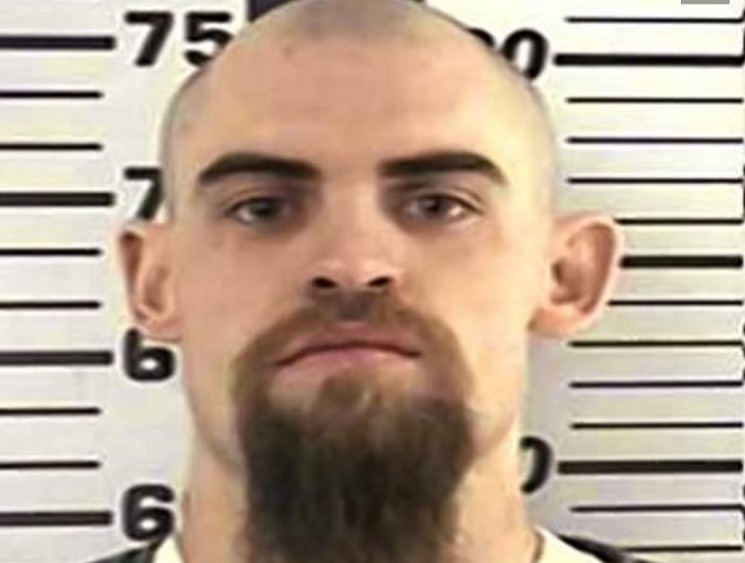 A booking photo of Mark "Slim" Daniels.
Colorado Department of Corrections
The assault caused only minor injuries to Holmes — something that Daniels regretted, as he confided in the aforementioned letter.

"I'm so sorry I couldn't wipe him out and sent [sic] him packing to Satan's lake of fire," Daniels acknowledged. "It was just impossible to do by myself with so many cops. I did get him six or seven good ones and this stupid ass case manager [name deleted] ran out of her office and and put her head in front of Holmes' cause I was about to knock him out. That's why she got socked a few times."

Daniels added: "Once we were on the ground I looked in his eyes and he knew he came close with his demise. He was very scared. I'm so sorry I couldn't finish him for you."

As for the official account of what happened, prison documents stated that an officer escorting Holmes on October 8 opened a sliding gate inside the facility, unwittingly putting Holmes into close proximity to Daniels. At that point, Daniels allegedly "ran through the slider, squeezing through as it was closing toward offender Holmes.... Offender Daniels began hitting offender Holmes, in and around his head, with his fist."

Jailers are said to have responded by shouting, "No! Don't do it!" Meanwhile, the account continues, "Daniels kept swinging over the top of [one officer’s] head, still hitting offender Holmes" until authorities managed to pry the two apart.

James Holmes's inmate location information, as seen on the federal Bureau of Prisons website.
bop.gov
Secrecy over Holmes's location followed, much to the chagrin of 18th Judicial District DA George Brauchler, who prosecuted the case and is currently running for governor in 2018. "The system is set up to be so secretive on the back end, where the only focus seems to be the preservation of this guy’s life above and beyond any concerns of the community and the victims," Brauchler told CBS4 last year. "Is this a guy who is going to be potentially incarcerated in one of their states, and is it possible he could escape into one of the states where a victim lives? That’s a concern.”

Then, yesterday, the Colorado Department of Corrections finally put out a news release confirming that Holmes was in a penitentiary. "The State sought to place the inmate in the Federal System several months ago, but placement required finding space at a facility that could provide appropriate security," it reads in part. "That space recently became available and the move to the Federal prison was secured."

The release didn't reveal where Holmes was being housed — but in recent hours, his information became accessible via the federal Bureau of Prisons' website, as seen in the graphic above.

The Allenwood, Pennsylvania, facility is just over 1,600 miles from Denver. But that's not far enough away to ensure that he'll be safe from every inmate looking to follow in Daniels's footsteps.