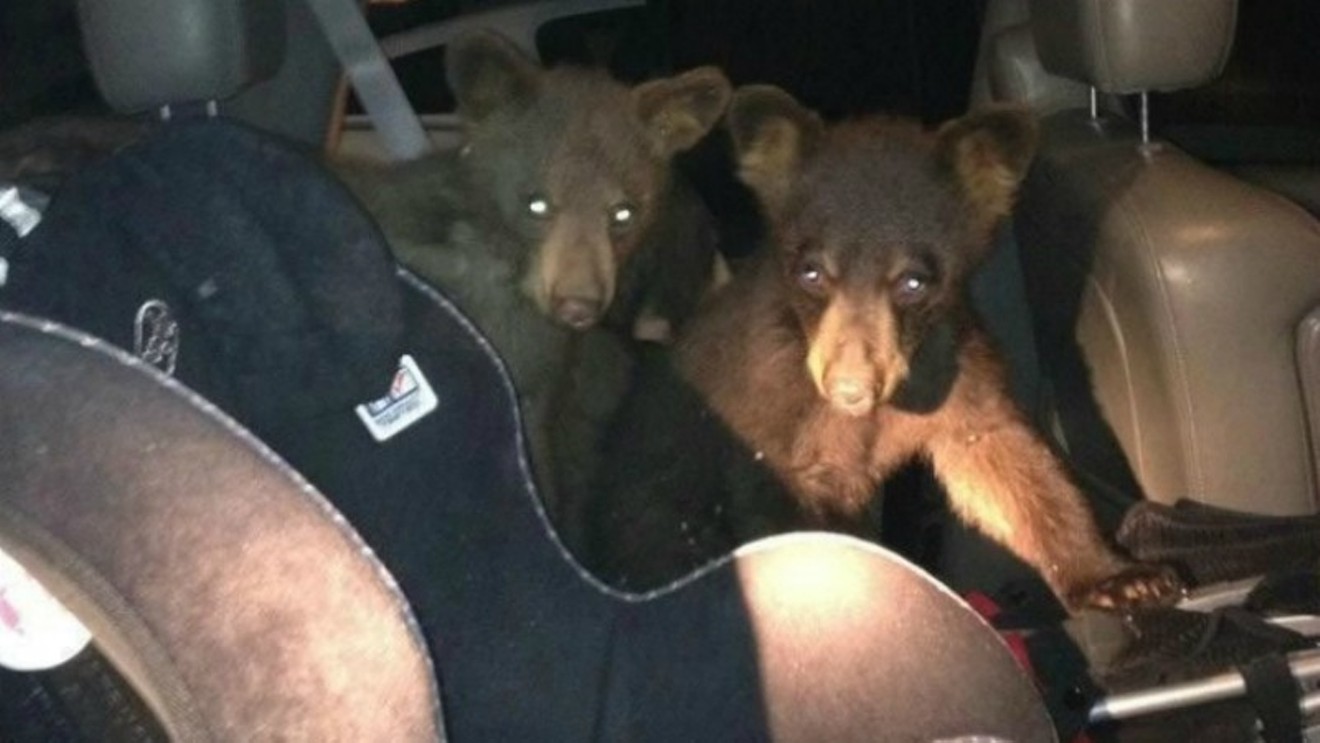 All the photos in this post are drawn from a 2015 Colorado Parks and Wildlife analysis of human-bear conflicts accessible below. Colorado Parks and Wildlife
As we've reported, at least 168 bears have been euthanized in Colorado so far in 2017, a year in which the number of conflicts between bears and humans has both alarmed and exasperated Colorado Parks and Wildlife officials. Ground zero for this phenomenon is Pitkin County, home to the moneyed enclave of Aspen, where CPW personnel have put down more than fifty bears and dealt with literally hundreds of incidents during the past ten-plus months. The troubles are so frequent that they seldom make headlines, even at times when bears rip apart homes with residents hiding inside them.

"This summer in the Aspen area, we were averaging three to four break-ins a night," reveals Perry Will, wildlife manager for Area 8, which includes parts of Pitkin, Eagle and Garfield counties. "And if you read these reports, a lot of them say there are people in the bedroom when a bear's in the house, or they've locked themselves in the bathroom — a lot of home entries."

He's right. Colorado Parks and Wildlife provided us with the Pitkin County bear report for the months of June-October — it's accessible below along with the department's 2015 analysis of bear-human conflicts — and the sheer volume of calls it catalogues is positively astonishing. The six registered on October 31, the last day covered in the document, wasn't higher than usual because of the Halloween holiday. Indeed, that total is modest compared to some days during the warmer-weather months.

Bear in the house. RP [reporting party] and family in kitchen, trapped there. Doesn't know how bear got in.

Please call. Bear has gotten in house and destroyed her kitchen.

Bear got into house. RP's parents' house. Kitchen is destroyed. RP will wait there, he's in a back bedroom.

Bear sleeping in the backyard by the grill. Greeted the guests and then laid back down. Guests are very nervous.

RP is not in town. It broke in two nights in a row and has been destroying her house.

The amount of bears causing this damage can be tough to calculate. Colorado Parks and Wildlife estimates that there are 19,000 of the animals in the state, with some raising more concerns than others. "We probably had a dozen bears within the city limits of Carbondale causing conflicts, and that's way higher than we've ever had," Will points out. "And there were at least that many bears in the city limits of Glenwood Springs, or just outside it. Easily a dozen to twenty bears in and around Glenwood."

Colorado Parks and Wildlife
CPW has a two-strike policy toward bears. If the same bear causes an issue with humans twice, it will be euthanized. And in some cases, a single strike is enough to garner this response. "If they break into a home, they're pretty much deemed an aggressive bear and they're put down — if we can get our hands on them," Will allows.

Not that the June-October report is a complete accounting of problems with bears in Pitkin County in that period, since it only includes calls to Colorado Parks and Wildlife — and other agencies are dealing with these difficulties, too. Will notes that "a lot of these things happen in the middle of the night, and people will usually call the police department, who'll sometimes pass them along to us. But sometimes they'll take care of them."

The recurrent involvement of law enforcement with bears likely inspired a phrase Will uses for the worst ursine offenders. "I refer to them as criminal bears," he says. "They know they can break into a home and get rewarded, because they've done it before. It's something they learn, and it typically starts with them getting into someone's trash. Then they enter through an open door or window, and once they find things they like inside, they start breaking into more houses. It's sort of a progressive thing."

In Will's view, bear-human conflicts are on the rise for a slew of reasons: more people moving into the high country, more development in areas that bears once had to themselves, more outsiders who have no personal experience with wildlife and weren't taught how to dispose of garbage properly. And that's not to mention environmental factors.

"We've been getting food-failure years for natural foods that bears eat," he notes. "We used to get a food-failure year once every ten years, and then it was once every five — but now it seems like it's every other year for some things. The chokecherries were okay for us in certain places this year, but the acorns were nonexistent."

If the woods produce "good natural forage, we don't have many conflicts," Will continues. "You'll still have some bears who are used to human food. The chokecherries can be hanging and the service berries and acorns can be thick and they'll still be rummaging through trash. But most of them prefer natural food — and when it's not there, they know where they can find other things to eat."

Colorado Parks and Wildlife
Is this scenario a symptom of global warming? Will doesn't go there — but he concedes that weather patterns in Pitkin County appear to be changing in ways that are bringing bears into closer proximity with people. "We've been getting these late freezes, where everything was flowering but then it freezes and that's the end of it. And this year was a drought year. It looked like the service berries were going to come along, but that didn't happen because it was droughty as heck. And that's pretty tough on bears."

Human behavior can further exacerbate the situation. For one thing, plenty of folks don't recognize how dangerous bears can be. "They're not used to seeing them," Will says, "so it's a photo op for them. They'll try to take selfies with them, even though these are wild animals and it's just not safe."

No one in Pitkin County has been injured by a bear in 2017 to date, but Will stresses that it's happened before. "Not too many years ago, a bear swiped at a lady in her house. She startled it, not knowing there was a bear there, and it swatted at her and barely missed taking her eye out. A few years ago, there was a lady sleeping in a lawn chair in her back yard, and a bear bit her on the leg. And last year, a person got scratched when he startled a bear in a dumpster. Bears don't come looking to hurt you, but if you startle them or you corner them, you're going to get hurt. And if a bear injures a person, it dies. No question about that."

People who fail to inform CPW about bear incursions because they don't want to be responsible for an animal's death represent another wild card. According to Will, "They won't call a lot of times because they know it'll give them a strike. But even if they don't call, the bad behavior is already established, and they'll get tired of it — call us and say, 'I can't deal with this bear anymore.' But if they'd called the first time, they wouldn't have had to."

Bear calls happen so often that "there are times during the summer that all my guys do is deal with them," Will adds, "and it does have an impact on the rest of our job and what we'd like to be doing. We should be on the river checking fisherman or doing law enforcement on the reservoir or bag-limit checks during hunting season. But all we're able to do is deal with bear conflicts."

When TV stations, in particular, put together pieces on this topic, they're often played for humor. But Will isn't laughing. "I'll see a story about a bear getting into a car and think, that's not even newsworthy around here anymore. It's so commonplace it doesn't even raise an eyebrow — unless someone gets hurt."

Click to access the Pitkin County bear report for June-October 2017 and the 2015 Colorado Parks and Wildlife analysis of human-bear conflicts.