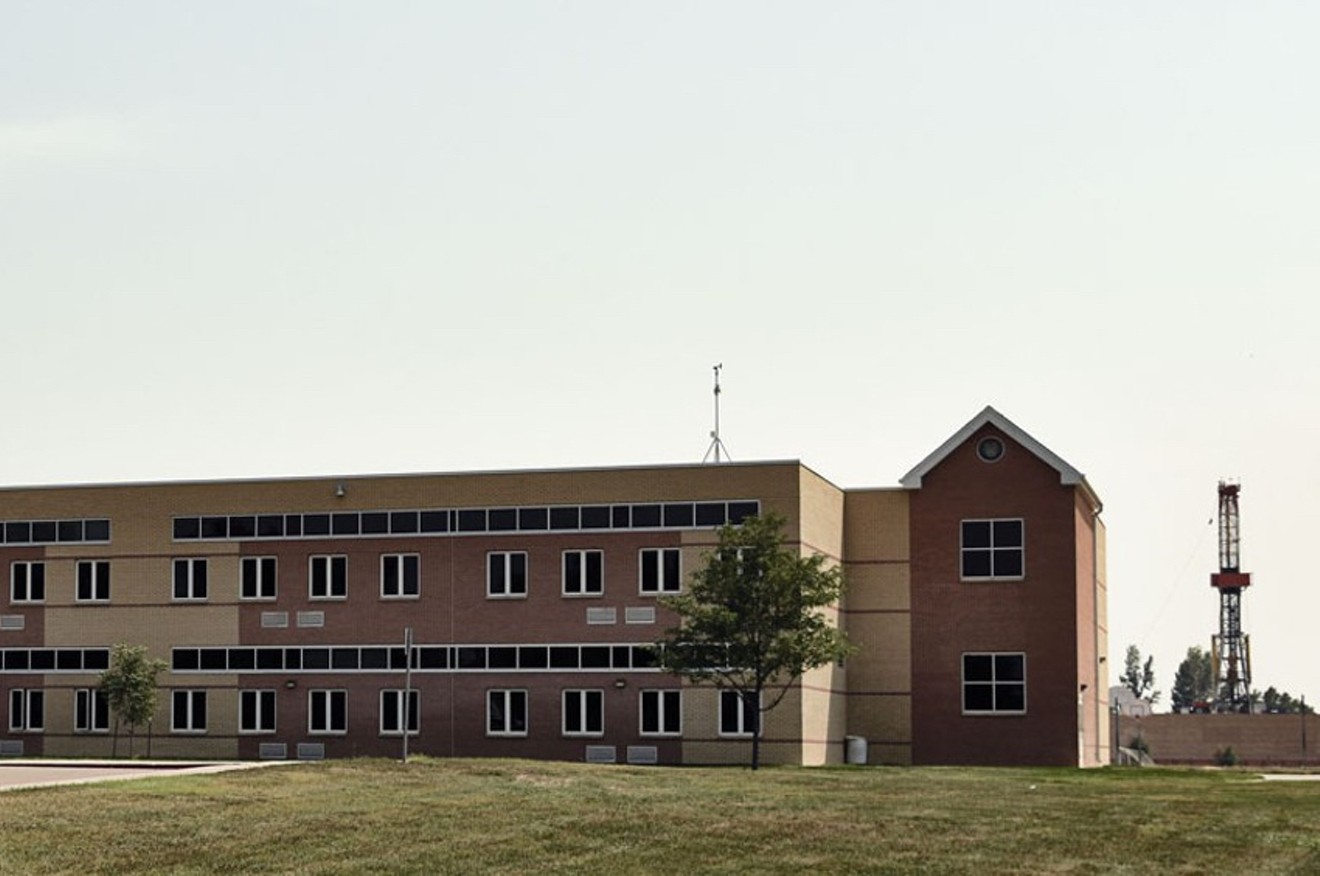 A drilling site operated by Extraction Oil and Gas sits just 1,300 feet from Bella Romero Academy in Weld County. Anthony Camera
When Colorado air-quality regulators notified the public of an elevated benzene reading near Greeley's Bella Romero Academy last November, they emphasized that the state's air-monitoring equipment had only detected a single violation — one 45-minute sample that exceeded health standards out of more than 85 days of testing.

But an independent report released by anti-fracking advocacy group 350 Colorado today, March 11, suggests that there's more to the story. Based on data obtained through an open-records request and analyzed by Barrett Engineering, an Evergreen-based environmental consulting firm, the report found that air quality at Bella Romero — which sits just 1,200 feet from a fracking site operated by Denver-based Extraction Oil and Gas — exceeded eight-hour health standards for benzene 113 times during the monitoring period, including on four school days. A well-known byproduct of oil and gas drilling, benzene is a toxic chemical that can cause cancer and a wide range of other negative health effects.

"These findings demonstrate an increased risk of the children, teachers, staff and neighbors of Bella Romero being negatively impacted by these toxic emissions, both on a short-term and long-term basis," Barbara Donachy, a 350 Colorado member of Physicians for Social Responsibility, said in a statement on the report. "Children's smaller developing bodies are most vulnerable. Continued exposure to toxic emissions that increase their risk of severe short-term and permanent, life-threatening health impacts, such as leukemia, is unacceptable."

While it's true that the state's air-monitoring data, collected by equipment operated by the Colorado Department of Public Health and Environment between May and December 2019, showed only one hourly benzene reading exceeding the federal health standard of 9 parts per billion (ppb), activists argue that lower, eight-hour standards are more relevant in assessing health risks in a school setting. The report references the eight-hour benzene standard of 0.94 ppb set by California's Office of Environmental Health Hazard Assessment.

"The eight-hour level was developed for exactly this setting, where exposures to the general public, including sensitive subgroups, occur on a recurring basis but only for a portion of the day," the report reads.

The analysis also faults the CDPHE's Air Pollution Control Division for conducting only "intermittent monitoring," which it says "cannot possibly capture the worst-case impacts" of emissions from oil and gas sites, which can vary widely depending on factors like drilling activities, well output, meteorological conditions and more. Overall, the state only captured air-quality data for about one out of every five hours during the monitoring period, the analysis found.

"The APCD’s episodic approach to this monitoring effort cannot assure that safe levels were not exceeded more frequently, i.e., during the many school hours and days during which the monitor was absent," says the report.

A CDPHE spokesperson said that the agency was aware of the analysis, but officials were not immediately available for comment. In January, CDPHE officials told lawmakers during a hearing at the State Capitol that the department's air-monitoring equipment was increasingly "oversubscribed," and stressed the need to better fund APCD programs.

The Bella Romero fracking site has been among the most controversial projects proposed during Colorado's decade-long drilling boom. After initial plans to drill near a predominantly white school in Greeley were derailed by outraged parents, Extraction began developing a new site near Bella Romero, where more than 80 percent of students are Latino and 90 percent qualify for free and reduced-price lunch. In January, 38 activists were arrested at the Capitol during Governor Jared Polis's State of the State Address in a protest against fracking at the site.

"CDPHE representatives have been insisting that there would be no negative health effects from the exposure," Patricia Nelson, the parent of a Bella Romero student and a longtime opponent of the project, said in a statement. "By burying data and cherry-picking health standards, while allowing fracking to continue, Governor Polis and the CDPHE have abandoned protection for our school, which is primarily a low-income community of color. They are turning a blind eye to a clear case of environmental racism."
KEEP WESTWORD FREE... Since we started Westword, it has been defined as the free, independent voice of Denver, and we'd like to keep it that way. With local media under siege, it's more important than ever for us to rally support behind funding our local journalism. You can help by participating in our "I Support" program, allowing us to keep offering readers access to our incisive coverage of local news, food and culture with no paywalls.
Make a one-time donation today for as little as $1.