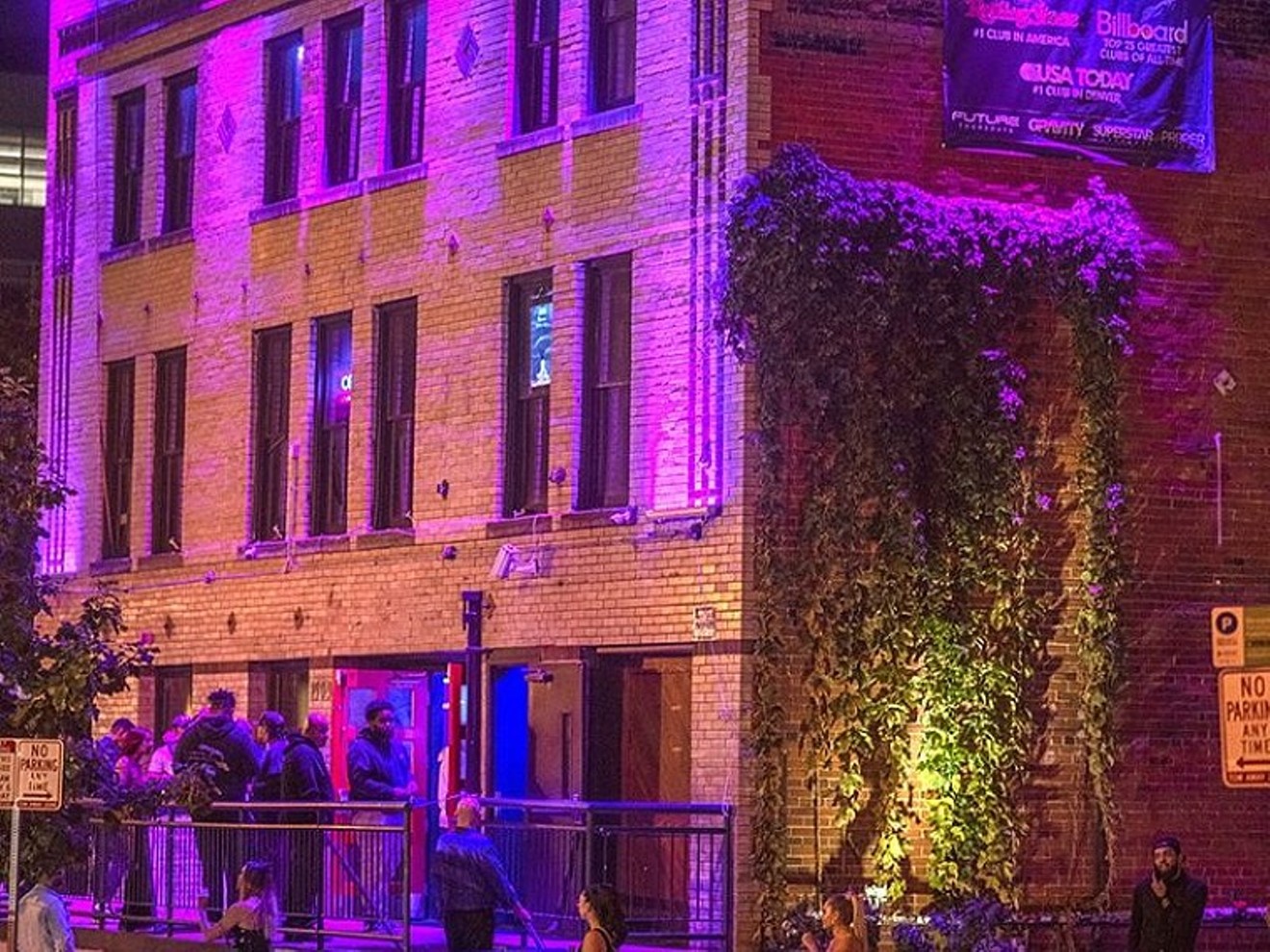 Beta has lost its liquor license. Evan Semon
Beta Event Center owner Valentes Corleons, whose legal name is Hussam Kayali, has a date in Denver County Court on January 13, to explain why his club at 1909 Blake Street should not be declared a public nuisance. Although Corleons already closed the club, at least temporarily, after a New Year's Day shooting at his venue next door, and the city managed to yank Beta's liquor license through an administrative hearing process that wrapped up on January 5, the hearing is still on the docket, and the Denver City Attorney's Office is still on the case.

Will Corleons fight to save the legendary club? Stranger things have happened, as shown by this timeline of the venue's history:

2015: Billboard lists Beta as one of the world's 25 greatest dance clubs of all time.

2018: Roulier tries to sell the club but doesn't land any deals. Toward the end of the year, 33-year-old Jacob Morton dies of an overdose outside of the club.

Early 2019: Beta shuts down. Co-owners Roulier and McCray say they want to renovate the club and start searching for additional capital and a new partner.

Late 2019: Beta reopens as Beta 2.0, with Corleons, who'd been running LoDo clubs like Purple Martini and Dorchester Social, brought on as a partner.  By the end of the year, Corleons has taken over as operator of the nightclub and makes Beta much more about hip-hop than EDM.

March 2020: Roulier and McCray agree to sell their last stake in Beta to Corleons, who renames it Beta Event Center. Days later, the COVID-19 pandemic leads to venue closures throughout Denver for two months.

June 2020: The Denver Department of Public Health and Environment shuts down Beta, after videos surface online of guests and staffers not wearing masks in the just-reopened club. Corleons, who'd already had administrative issues with Denver officials over other venues, claims the city is targeting him because his clubs play hip-hop and attract Black customers.

August 2020: Beta reopens after the temporary closure by public-health authorities.

September 2020: The Denver Department of Excise and Licenses issues a show-cause order regarding Beta's violation of COVID rules in June. The case ends in a settlement agreement that allows the club to stay open.

June 2021: Two undercover female Denver vice detectives attend Beta on separate Friday nights. On one occasion, an undercover detective enters Beta with a handgun in her waistband despite being searched at the entrance. The two detectives try to score cocaine from patrons while inside the club; they're successful once and are dealt imitation narcotics another time. 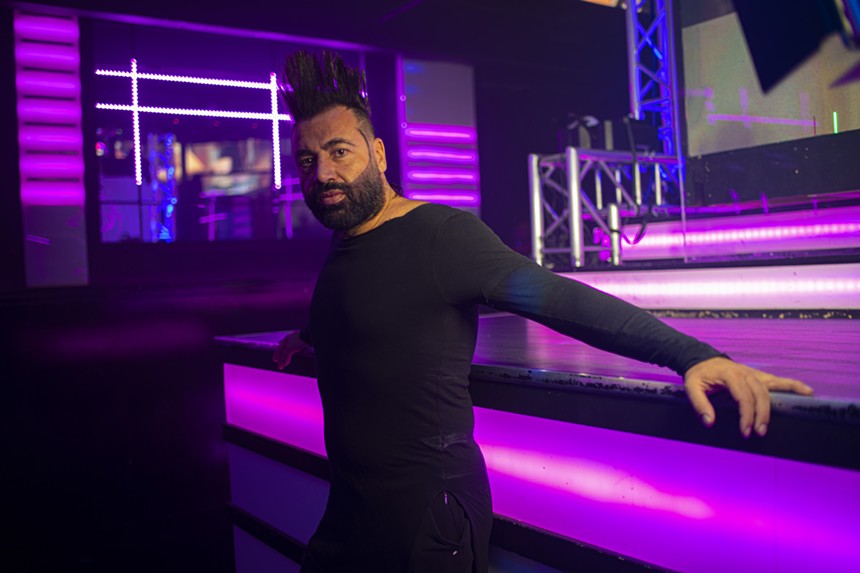 Valentes Corleons inside Beta.
Evan Semon
July 2021: Denver police detective Derrick Keeton begins working at Beta off-duty. The club has been hiring multiple officers on popular nights to add muscle and a uniformed presence to Beta's security. Later that month, Keeton emails a fellow DPD detective to report that fights are common and that there's "no crowd management being done at the club." Keeton also relays that officers have told management that they "regularly see persons in the club that may be affiliated with gang activity and that rival gang members have been present at the location at the same time." For example, some patrons have entered wearing jean jackets with the words "Park Hill Blood" on the back.

August 2021: A shooting on the 1900 block of Blake Street leaves one person dead. The Denver Department of Excise and Licenses files a show-cause order against Beta, seeking to revoke the club's liquor license. The order alleges that Beta has violated multiple laws and codes by hiring unlicensed security guards, not posting occupancy limits and allowing drinking after hours, among other things. The department also tries to nail Beta for the undercover detectives being able to buy the cocaine and fake cocaine.

September 2021: The Denver City Attorney's Office files a public-nuisance complaint in Denver County Court, seeking to shut down Beta immediately. Since Beta has been declared a public nuisance by the city, Denver police officers can no longer work at the club in an off-duty capacity.

November 2021: Federico Alvarez, a former Denver District Court judge, oversees two full days of administrative hearings related to the city's attempt to revoke Beta's liquor license. These hearings feature dramatic testimony from moonlighting cops, detectives and Corleons himself. During the hearing, it comes out that Corleons introduced himself to a cop as a "made man" in the Sicilian Mafia during an inspection over the summer; Corleons denies that this was meant as a threat. Police also say that Corleons tried to bribe a cop with $10,000 to make the case against Beta go away, an allegation that Corleons denies.

December 2021: Alvarez issues a ruling in which he recommends that Beta lose its liquor license. While Alvarez does find some violations, including ones related to after-hours drinking and the hiring of unlicensed security guards, he doesn't find evidence that Beta was culpable for the drug-dealing complaints. Still, Alvarez decides that the Mafia reference to a cop and the allegation of attempted bribery are "extraordinarily aggravating" factors that weigh in favor of revoking Beta's liquor license.

January 1: In the early-morning hours of New Year's Day, a fatal shooting leaves two dead inside Cabin Tap House, which is located right next to Beta. Corleons had purchased the building in July, replacing Falling Rock Tap House, which had been there for 24 years, with Cabin. Later that day, the Denver Department of Excise and Licenses orders Cabin to shut down immediately, pending an administrative process to determine if the club should be able to keep its liquor license. "I'm sorry, I didn't mean to harm anything. I didn't mean to bring problems. I'm just trying to live my dream, brother," says Corleons, who'd already voluntarily closed both Cabin and Beta, at least temporarily.

January 5: On her second-to-last day as executive director of Excise and Licenses, Ashley Kilroy sustains Alvarez's recommended decision that Beta lose its liquor license. Beta, which is already closed, must remain closed pending any appeal.

January 13: Corleons is scheduled to duke it out with city officials in Denver County Court, to determine whether Beta Event Center should be declared a public nuisance and closed permanently. Corleons promises that he's "suing everything" so that he can reopen Beta despite the outcome of that hearing: "We're going to the Supreme Court."
KEEP WESTWORD FREE... Since we started Westword, it has been defined as the free, independent voice of Denver, and we'd like to keep it that way. With local media under siege, it's more important than ever for us to rally support behind funding our local journalism. You can help by participating in our "I Support" program, allowing us to keep offering readers access to our incisive coverage of local news, food and culture with no paywalls.
Make a one-time donation today for as little as $1.