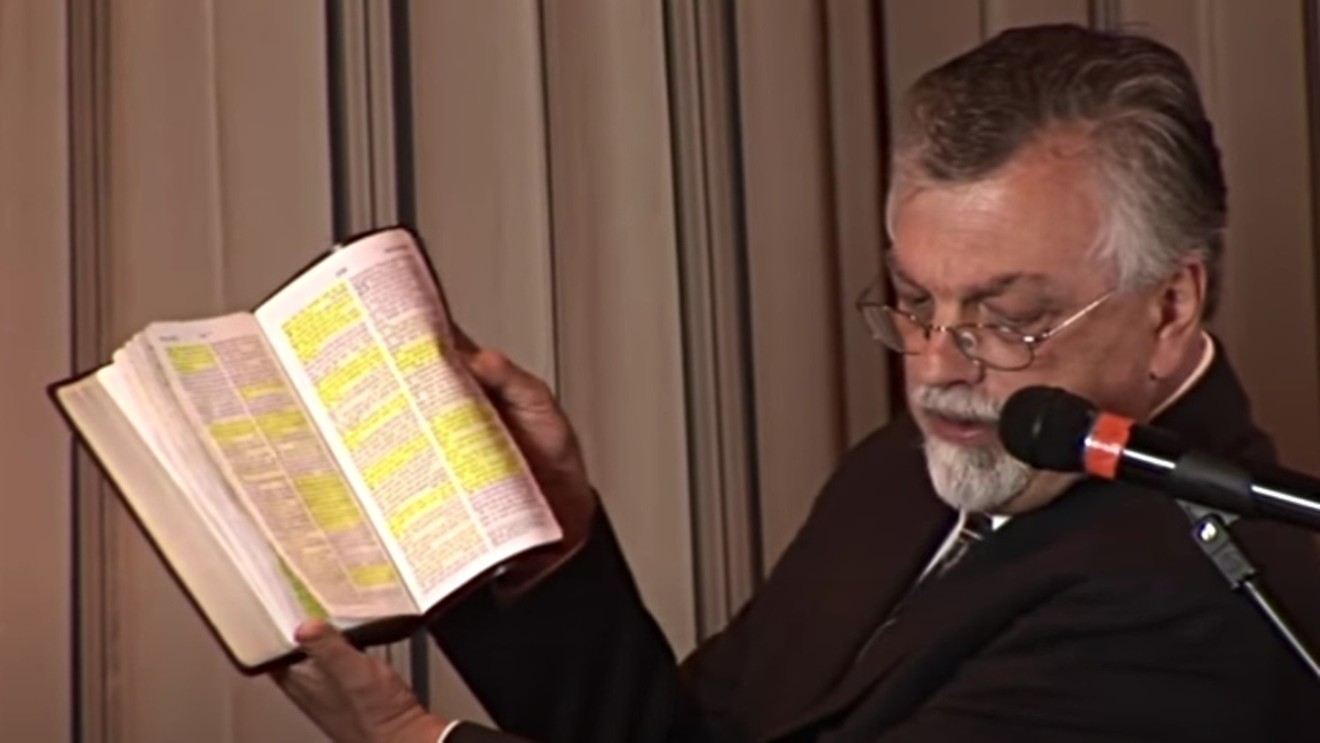 Bob Enyart reading from the Bible during a 2014 sermon. YouTube
On September 1, Westword reported that Bob Enyart, a controversial Denver media figure who'd gone on to become a podcaster and pastor of Denver Bible Church, had contracted COVID-19; so had his wife, Cheryl. In late August, their son Dominic had posted that "it is just a minor case," but that changed over the days that followed. On September 13, Fred Williams, Enyart's co-host on what was dubbed Real Science Radio, revealed that his mentor had died of the disease. He was not vaccinated.

Enyart was the lead plaintiff in a lawsuit that prompted a U.S. District Court judge appointed by President Donald Trump to grant a temporary restraining order last October against the Colorado public-health order regarding COVID-19 and mask use at religious services, as well as rules limiting gatherings to 175 people amid the pandemic.

I spent a considerable amount of time around Enyart while researching "Thank God for Bob!," a December 1999 feature that's among the craziest ever published by Westword. I described him as "a protest veteran — the Christian zealot (and proud of it!) who spent 25 grand on O.J. Simpson memorabilia in February in order to set it ablaze; the religious kook (like that's a bad thing!) who traveled all the way to New Zealand in September simply to be arrested for greeting the President of the United States with 'Clinton is a Rapist' banners; the right-wing zany (a noble calling!) who's been able to slip his radical views under the anti-Christian radar with the aid of programs like ABC's Politically Incorrect, on which he's appeared three times in the past six months. See Bob discuss the proper way to discipline a child with Martin Short and Donny Osmond. Hear Bob snipe at British talk-show hostess Ruby Wax. Watch Bob debate the evils of pornography with Hustler publisher Larry Flynt."

On February 11, 2021, one day after Flynt's death (he reportedly succumbed to longtime health issues), Enyart gave folks the chance to eyeball this last piece of footage. The intro to the video's page on his YouTube channel, complete with multiple links to his website, kgov.com, reads: "22 years ago Bob, with some great help from Victoria Jackson, warned Larry Flynt that one day He will stand before God and be judged, unless He repents. That day has just come. To hear Bob discuss this check out https://kgov.com/flynt and to see our strong warning, just click on over to https://kgov.com/pornography. Bob appeared on Politically Incorrect a half-dozen times including twice to confront Jimmy Kimmel, telling the late-night host during both appearances, 'Hollywood used to have comedians, but it no longer does. Today it just has crotch humorists. Jimmy, you're a crotch humorist.' In the above program, note that the live audience also consisted of perverts, like Lynn Redgrave and [Bill] Maher, who are happy to degrade women. Note also that Maher would not agree that it is wrong for a husband to cheat on his wife."

As Enyart's nastygram to Flynt after his death indicates, he was all about harsh final judgments. Indeed, a regular feature on his defunct TV program Bob Enyart Live found the unrepentant homophobe gleefully reading obituaries of AIDS sufferers while cranking "Another One Bites the Dust" by Queen, whose lead singer, Freddie Mercury, succumbed to the malady. "Listen to the words of the song and you'll understand why I did it," he told us at the time, as if his motives were somehow puzzling.

Dozens upon dozens of tweets about Enyart's passing mention the Queen song, and according to a post on the Friendly Atheist website, the tune also began popping up in comments on Williams's announcement — but if that's true, they've been removed. Here's what Williams wrote:


It comes with an extremely heavy heart that my close friend and co-host of Real Science Radio has lost his battle with COVID. Bob Enyart was one of the smartest, and without question the wisest person I've known. All the while being exceedingly kind and humble, always willing to listen and discuss anything you wanted. It was an honor beyond measure to have been alongside him for 15 years and over 750 science shows. I always marveled at how Bob put up with me all those years together.... When we pre-recorded a show and he asked me to do a retake, I'm convinced that many times he would on purpose follow it with one of his own retakes just to make me feel better. The number of lives he touched is immeasurable and I'm sure Jesus has an extra special place for him in heaven. "Well done, good and faithful servant."

Heaven's gain has left an enormous hole here on earth. Bob's enduring legacy will live on with the treasure trove he leaves behind, including an amazing website which many have recognized as the best online resource of science confirming the Genesis record, his captivating Bible study MP3s, science DVDs, YouTube videos, etc.

I miss my best friend and mentor. Please especially pray for Bob's family.

The most recent item on the Real Science Radio Facebook page pairs a photo of a man donning a face shield and N95 mask with the following caption: "Those who tell conspiracy theorists to take off their tin foil hats are now wearing this." The Enyarts' decision not to be vaccinated, however, was connected to their ant-abortion views. An August 2021 passage on kgov.com states: "Bob and Cheryl Enyart have sworn off taking the Pfizer, Moderna, and Johnson vaccines because, as those firms admit, they tested these three products on the cells of aborted babies."

We asked the Colorado Department of Public Health and Environment about Enyart's claim. A spokesperson responded that "none of the currently authorized and approved COVID-19 vaccines in the United States contain human cells or tissue" before pointing to the "frequently asked questions" page on the department's website, where buried in the "Health concerns and the vaccine" section is the admission that "some human cell lines were used in the production of Janssen’s vaccine. Pfizer and Moderna used human cell lines to test their vaccines.... Human cell lines are sometimes used in the early stages of vaccine development because viruses from which those vaccines are made need living cells to reproduce. These cell lines originally came from fetal tissue more than thirty years ago. None of the original tissue remains today; all descended cells are grown in labs. No new fetal tissue is required in the ongoing development and production of vaccines."

By the way, the most recent item on the Bob Enyart Live Facebook page is a September 10 update noting that "Bob and Cheryl Enyart are being treated in hospital for severe COVID-19 conditions. They love you guys and are praying for you and hope that you will pray for them and their seven wonderful sons and extended family. Before heading in, Bob reminded us, 'God is good, all the time.'"
KEEP WESTWORD FREE... Since we started Westword, it has been defined as the free, independent voice of Denver, and we'd like to keep it that way. With local media under siege, it's more important than ever for us to rally support behind funding our local journalism. You can help by participating in our "I Support" program, allowing us to keep offering readers access to our incisive coverage of local news, food and culture with no paywalls.
Make a one-time donation today for as little as $1.