Bob Enyart delivering a recent sermon at Denver Bible Church. YouTube
Last week, U.S. District Court Judge Daniel Domenico, who was appointed by President Donald Trump, granted a temporary restraining order against the Colorado public-health order regarding COVID-19 and mask use at religious services, as well as rules limiting gatherings to 175 people amid the pandemic.

But while the ruling has generated headlines here and across the country, less attention has been paid to the lead plaintiff: Denver Bible Church pastor Bob Enyart, the star of "Thank God for Bob!," a December 1999 feature article that's among the wildest ever published by Westword.

Back then, we described Enyart as "a protest veteran — the Christian zealot (and proud of it!) who spent 25 grand on O.J. Simpson memorabilia in February in order to set it ablaze; the religious kook (like that's a bad thing!) who traveled all the way to New Zealand in September simply to be arrested for greeting the President of the United States with 'Clinton is a Rapist' banners; the right-wing zany (a noble calling!) who's been able to slip his radical views under the anti-Christian radar with the aid of programs like ABC's Politically Incorrect, on which he's appeared three times in the past six months. See Bob discuss the proper way to discipline a child with Martin Short and Donny Osmond. Hear Bob snipe at British talk-show hostess Ruby Wax. Watch Bob debate the evils of pornography with Hustler publisher Larry Flynt."

That's not to mention a regular feature on his defunct TV program, Bob Enyart Live: He would gleefully read obituaries of AIDS sufferers while cranking "Another One Bites the Dust" by Queen, whose lead singer, Freddie Mercury, succumbed to the malady. "Listen to the words of the song and you'll understand why I did it," he told us at the time, as if his motives were somehow puzzling.

These days, a new disease is ravaging the planet; the novel coronavirus is estimated to have killed more than 1.13 million people so far, including 222,000-plus in the United States and in excess of 2,000 in Colorado. But Enyart believes the restrictions placed on religious institutions such as Denver Bible Church, a modest institution located at 4085 Independence Court in Wheat Ridge, are wholly unreasonable anyhow.

"Because we human beings are made in God's image and God's likeness, we have not only a right but an obligation to worship Our Creator, and we should be able to do that without government interference," he said during an October 21 interview. "And so we're thankful that this federal court recognized our right to worship."

He added: "Now, as our congregation gathers, they're not under any fear when we have congregational singing or when a family is headed to church and they don't know if they'll exceed the arbitrary limit that the government has put on church attendance." 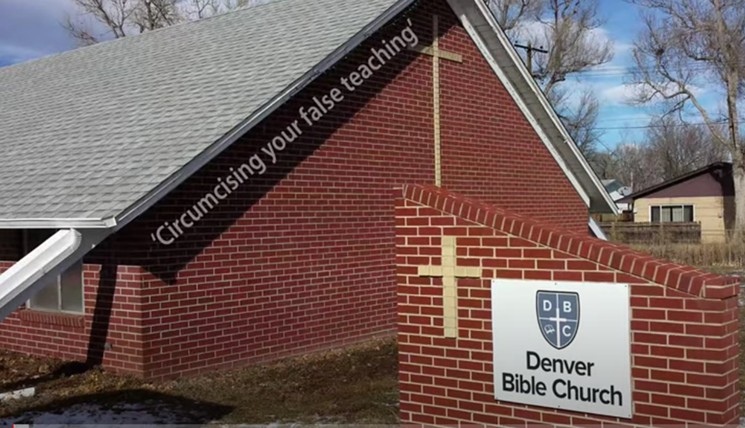 A look at Denver Bible Church, supplemented by a graphic message.
YouTube
As for how church services were conducted previously and the manner in which they'll take place following the ruling, Enyart offered no details, likely because future litigation is all but assured: The Colorado Attorney General's Office plans to appeal the decision by the judge, who turned down its motion for an emergency stay. No doubt the lawyers at the Liberty Counsel, which handled the case on behalf of Enyart and fellow plaintiff Joey Rhoads of Community Baptist Church in Brighton (and also pressed an unsuccessful appeal for outbreak-generating Andrew Wommack Ministries earlier this month), would prefer that he not publicly crow about a no-masks free-for-all in which hundreds of people jointly gamble to see if their love of the Almighty will prevent them from superspreading something other than the Good Word.

Still, there's no shortage of Enyart's particular brand of wisdom online. In our 1999 feature, he teased the impending launch of ShadowGov.com, which he portrayed as an "Internet shadow government." The project lingers online to this day, though most of the major categories are a bit dated: They include "Ramsey Murder," "9/11 Attack," "Columbine Massacre" and, of course, "Clinton Rapist."

The latter seems especially musty given the U.S. Justice Department's claims this week that President Trump can't be sued for defaming writer E. Jean Carroll, who says he raped her in a New York City department store back in the 1990s, since his comment dismissing her as not being his type was made in the course of "an official White House response to press inquiries."

Don't expect Enyart to travel to Washington with a "Trump Is a Rapist" sign anytime soon. He's too busy delivering regular radio shows at KGOV.com and speaking on behalf of OpenTheism.org, which he co-founded. That site declares on its home page that "Because God is Free the Future Must be Open," explaining: "Ultimately, open theism is not based on man's freedom but on God's freedom. Open theism is the Christian doctrine that the future is not settled but open because God is alive, eternally free, and inexhaustibly creative. Although this undeniable truth is virtual heresy to many Calvinist and Arminian theologians, regardless, open theists affirm the obvious, that God is able to think new thoughts. And He can write new songs. And if He so desires He could design new butterflies too."

Enyart has praise for another powerful entity, too. "We're thankful to the federal court," he told us, "and we look forward to continuing the battle in the 10th Circuit. And mostly, we look forward to worshipping the Lord without fear of punishment."

Click to read the ruling in Denver Bible Church, et al., v. Alex Azar, et al.
KEEP WESTWORD FREE... Since we started Westword, it has been defined as the free, independent voice of Denver, and we'd like to keep it that way. With local media under siege, it's more important than ever for us to rally support behind funding our local journalism. You can help by participating in our "I Support" program, allowing us to keep offering readers access to our incisive coverage of local news, food and culture with no paywalls.
Make a one-time donation today for as little as $1.