COVID Hits Pastor/Podcaster Who Sued Over Masks in Church 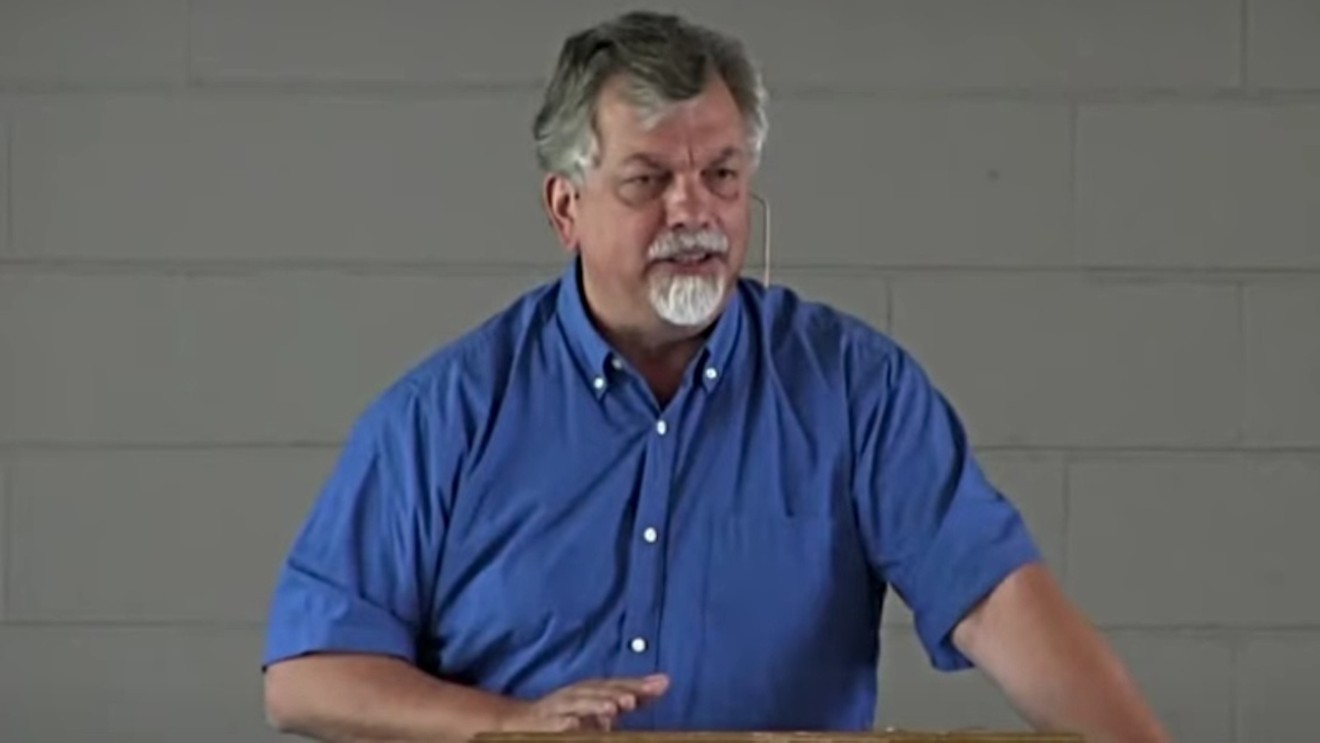 Denver Bible Church pastor Bob Enyart, a longtime Denver media personality who remains an active podcaster, made headlines last October when a lawsuit he filed prompted a U.S. District Court judge appointed by President Donald Trump to grant a temporary restraining order against the Colorado public-health order regarding COVID-19 and mask use at religious services, as well as rules limiting gatherings to 175 people amid the pandemic.

Now, however, Enyart and his wife, Cheryl, have both contracted COVID-19. Neither has been vaccinated, for what an August 2021 passage on Enyart's website, kgov.com, describes as pro-life reasons. "Bob and Cheryl Enyart have sworn off taking the Pfizer, Moderna, and Johnson vaccines because, as those firms admit, they tested these three products on the cells of aborted babies," it says.

Enyart is the subject of "Thank God for Bob!," a December 1999 feature that's among the wildest ever published by Westword. Back then, we described him as "a protest veteran — the Christian zealot (and proud of it!) who spent 25 grand on O.J. Simpson memorabilia in February in order to set it ablaze; the religious kook (like that's a bad thing!) who traveled all the way to New Zealand in September simply to be arrested for greeting the President of the United States with 'Clinton is a Rapist' banners; the right-wing zany (a noble calling!) who's been able to slip his radical views under the anti-Christian radar with the aid of programs like ABC's Politically Incorrect, on which he's appeared three times in the past six months. See Bob discuss the proper way to discipline a child with Martin Short and Donny Osmond. Hear Bob snipe at British talk-show hostess Ruby Wax. Watch Bob debate the evils of pornography with Hustler publisher Larry Flynt."

That's not to mention a regular feature on his defunct TV program Bob Enyart Live: He would gleefully read obituaries of AIDS sufferers while cranking "Another One Bites the Dust" by Queen, whose lead singer, Freddie Mercury, succumbed to the malady. "Listen to the words of the song and you'll understand why I did it," he told us at the time, as if his motives were somehow puzzling.

Enyart hasn't portrayed COVID-19 as a complete hoax. Indeed, his long, rambling post on COVID conspiracies debunks a slew of myths, including "the coronavirus was never a real threat," "the government planned the pandemic (as a power grab)," "the media planned the pandemic (to get Trump)," "the global elite planned this (toward ushering in the anti-Christ)" and "Fauci, who said 'it's coming,' planned this (to make money)." But he also argues that "mitigation efforts appear to be worse than the disease."

He underscored this point in an interview with Westword after the October court ruling. "Because we human beings are made in God's image and God's likeness, we have not only a right but an obligation to worship Our Creator, and we should be able to do that without government interference," he said. "And so we're thankful that this federal court recognized our right to worship." He added: "Now, as our congregation gathers, they're not under any fear when we have congregational singing or when a family is headed to church and they don't know if they'll exceed the arbitrary limit that the government has put on church attendance."

This time around, Enyart hasn't responded to outreach from Westword. But his diagnosis was confirmed in a note on the page for an August 20 podcast delivered under the banner "Real Science Radio." Dominic Enyart, Bob and Chery's son, writes: "After about a year and a half, the COVID finally found its way to the Enyart family. It's just a minor case."

A more detailed description has been deleted from Enyart's iHeart Media podcasting address, but it continues to linger on sites such as player.fm. The unedited item states: "Caring for his wife Cheryl, Bob then caught the COVID from her. So with the family now struggling to recover. Oh, yes, and PLEASE, PLEASE, PLEASE, don't send COVID treatment suggestions. Bob has receive about a hundred suggestions already; they often conflict with one another, and being exhausted, Bob has asked his staff to just block the email of anyone sending along a COVID treatment suggestion. So, Bob loves you too much. He doesn't want to lose email friends. So please honor his wish. Even if it meant he and Cheryl would die, they just don't want any more COVID treatment recommendations. Selah. Thanks everyone! :)"

We asked the Colorado Department of Public Health and Environment about Enyart's claim that the three major COVID-19 vaccines currently in use were tested "on the cells of aborted babies." A spokesperson responded that "none of the currently authorized and approved COVID-19 vaccines in the United States contain human cells or tissue" before pointing to the "frequently asked questions" page on the department's website, where buried in the "Health concerns and the vaccine" section is the admission that "some human cell lines were used in the production of Janssen’s vaccine. Pfizer and Moderna used human cell lines to test their vaccines."

The item continues: "Human cell lines are sometimes used in the early stages of vaccine development because viruses from which those vaccines are made need living cells to reproduce. These cell lines originally came from fetal tissue more than thirty years ago. None of the original tissue remains today; all descended cells are grown in labs. No new fetal tissue is required in the ongoing development and production of vaccines."

The CDPHE answer concludes with this line: "If you have ethical concerns about the vaccines, we encourage you to talk to your faith leaders about them."

No need for Enyart to take this advice, since he's the faith leader. So despite getting the disease, until a vaccine is developed that he considers sufficiently moral, he won't be getting immunized.
KEEP WESTWORD FREE... Since we started Westword, it has been defined as the free, independent voice of Denver, and we'd like to keep it that way. With local media under siege, it's more important than ever for us to rally support behind funding our local journalism. You can help by participating in our "I Support" program, allowing us to keep offering readers access to our incisive coverage of local news, food and culture with no paywalls.
Make a one-time donation today for as little as $1.