Don Coram came prepared; Lauren Boebert read from notes. Facebook
“If you’re like me,” said state Senator Don Coram in a May 23 Facebook post, “you can’t wait for Lauren Boebert to explain what she has accomplished during her tenure in Congress.” U.S. Representative Lauren Boebert’s opportunity to do just that came May 26 at the Sky Ute Resort in Ignacio, in a showdown between the two candidates in the Republican primary for Colorado's 3rd Congressional District, which covers much of the Western Slope and dives across the south of the state to include Pueblo.

Coram is still waiting for that explanation. Why Boebert agreed to a one-on-one debate with her Republican opponent is something of a mystery; with her close ties to Trump and all strategies Trumpian, debates would seem to be risks that the anti-democracy GOP does not care to take. In fact, in April, Republican National Committee Chair Ronna McDaniel announced that the RNC would withdraw from the Commission on Presidential Debates, calling the joint venture of the two major American parties launched in 1987 “biased,” and promising to find "newer, better debate platforms.” In doing so, the RNC appears to have adopted Donald Trump’s definition of “biased,” which is anything not firmly in his favor.

Boebert didn’t win the debate, if you can call it a debate. Coram showed up with plans and clear intent on some very Colorado-focused policy issues. Boebert ranted instead of reasoning. She didn’t have anything new to say; sometimes her message was Trumpian word-salad; at other times, she just served up the standard red meat of her Twitter feed.

One of the startling things — even for those accustomed to Boebert’s lack of respect for decorum and ethics — was her flouting of the previously agreed-upon rules. Moderator Dave Woodruff, president of the Durango chapter of the Colorado Restaurant Association, issued a reminder that there would be “no hitting below the belt,” a directive that Boebert followed for the first 45 minutes. And then she trotted out some of the Republican talking points usually reserved for Democrats or female Supreme Court Justice nominees of color: that Coram, too, was “grooming” children.

As reprehensible as that behavior was — and it was, CD3 voters, it was — this wasn’t the most egregious way in which Boebert flouted the rules of the debate. There was a strict “no notes” rule, which Coram followed. Boebert? Not so much, unless she was watching a ball game on her iPhone. But no, the last twenty minutes made impossible any potential denial of Boebert’s note-usage: As she got more flustered, she leafed through her stack of cheat sheets.

The debate played to Coram's strengths and all of Boebert's weaknesses. It was very much a policy discussion on Coram’s side and a personality discussion on Boebert’s. He was trying to explain positions, and she was trying to rile up the base. The subjects didn’t vary widely in the hour-long debate; while they started with gun control, as you might expect, it was a debate between the right and the far right on guns. That’s sort of like two addicts discussing how impossible it is to save for retirement. The discussions went the same way on inflation and the national budget; Coram mentioned a few specific concerns, and Boebert went wide, condemning President Joe Biden and blaming everything on illegal immigrants.

If there was any single issue that got the most play, it was water — which makes sense in CD3. Coram came across as knowledgeable; he didn’t have time to go into details, but he made it clear that he understood the issues, had done what he could at the state level and wanted to do more nationally. Boebert made it clear that she had no understanding of the issues, stating several times that she couldn’t answer specific questions about specific bills, that she’d “definitely have to look into it” and that she’d “have to get back to you” on those subjects.

Did Coram deliver any knockouts? He got in a few good jabs, but it’s tough for rational to mud-fight with crazy and not get dirty. Still, Coram stayed clean, even when he was being accused of ridiculous things, his record misrepresented, his character besmirched. Coram’s lack of reaction to Boebert’s antics is perhaps the best argument for his candidacy: He's not about grandstanding, he's about legislating.

Some highlights from the Boebert/Coram faceoff:

On Immigration: “I’m going to rant a little about this one,” Boebert said, and then she did just that, in a wide-ranging and disconnected tirade that included taking credit for her county opening up business during the pandemic because of her refusal to shutter like everyone else. She ended her “rant” by making up something called the “Department of Illegal Immigration” and claiming that Coram voted for it.

On Water and the Land: “I am proud to take a stand for the stewardship of the land in Colorado,” Boebert said before immediately launching into the importance of fossil fuels to American energy independence, which must have made her husband's clients in the oil lobby smile.

On the U.S. Forest Service: “I am absolutely paying attention to what the Forest Service is doing,” said Boebert. This was after she once again falsified her voting record in Congress, claiming that she helped appropriate $48 million for the Forest Service when in actuality she fought hard to defeat that funding. In protesting the bill on Twitter, she criticized it for its length, and said that it's something “no one will read.” Which is sort of like every fourteen-year-old’s argument for not reading Moby-Dick in English class. 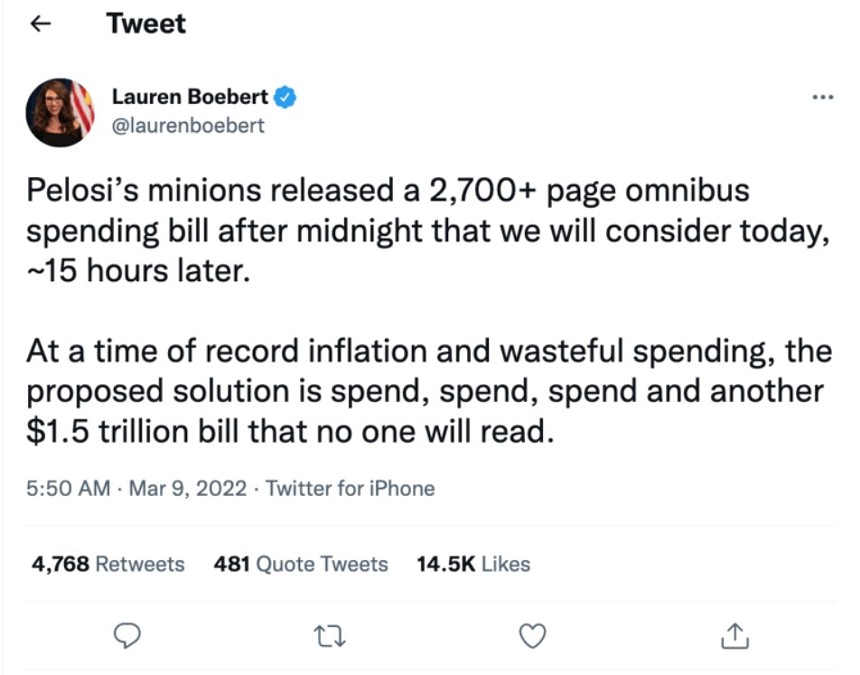 Twitter
On Putin and Russia: Against all evidence to the contrary, Boebert claimed that she’s always supported Ukraine, and that Putin is a bully that only Donald Trump could properly handle, with “restraint through peace,” which it’s pretty clear she read backwards from the notes she wasn’t supposed to have. She proceeded to talk about how she voted to ban Russian oil imports and provide aid to Ukraine, glossing over the fact that she voted against both and then reintroduced them with generous construction authorizations for oil and gas projects, including the Keystone Pipeline.

On Election Integrity: “I am proud that the first major act was to not certify the election results,” she said, now not just repeating the same Big Lie, but celebrating her role in it. But that vote wasn’t actually her first major act in Congress. Her first major act was supporting an insurrection at the Capitol in the first place, at the very least by her tweets prior to the violent coup attempt. Later in the debate, she proudly proclaimed that she has opposed any legislation on election reform. Yeah, no kidding.

Head-Shaking Moment #1: Coram asked Boebert about the widely reported ethical violation suggested by her work on the Natural Resources Committee given her husband’s seven-figure earnings from energy consulting — and her failure to disclose it. Boebert responded by making a joke of it, calling to her husband in the audience: “Thanks for workin’ so hard, babe.”

Head-Shaking Moment #2: While not answering a question about election integrity, she casually dropped the phrase “Fauci-funded Chinese virus,” which is like the Boebert trifecta: ignorant, conspiratorial and racist.

The Boebert Takeaway: Attack, attack, attack. In addition to drawing Coram into the circle of the GOP’s child-grooming bogeymen, she also accused him of corruption and being an “illegal drug dealer.” Of course, she also called the Republican-only debate “bipartisan” in her closing statement, so how anyone is still taking this woman seriously in terms of intelligent leadership remains a mystery.

The Coram Takeaway: Calm. Rational, even in the face of arrogant aggression, and interested in communicating his honest opinion on complex issues facing Colorado. “I’m just a legislator, not an instigator," he said. "I’m not trying out for a reality-TV show. I’m here to work.”

Boebert and Coram will meet for a second debate in Pueblo during the second week of June…unless and until Boebert’s people decide that these debates, too, are “biased.” And then bail.
KEEP WESTWORD FREE... Since we started Westword, it has been defined as the free, independent voice of Denver, and we'd like to keep it that way. With local media under siege, it's more important than ever for us to rally support behind funding our local journalism. You can help by participating in our "I Support" program, allowing us to keep offering readers access to our incisive coverage of local news, food and culture with no paywalls.
Make a one-time donation today for as little as $1.