Boulder Isn't Nearly as Young, White and PC as You Think 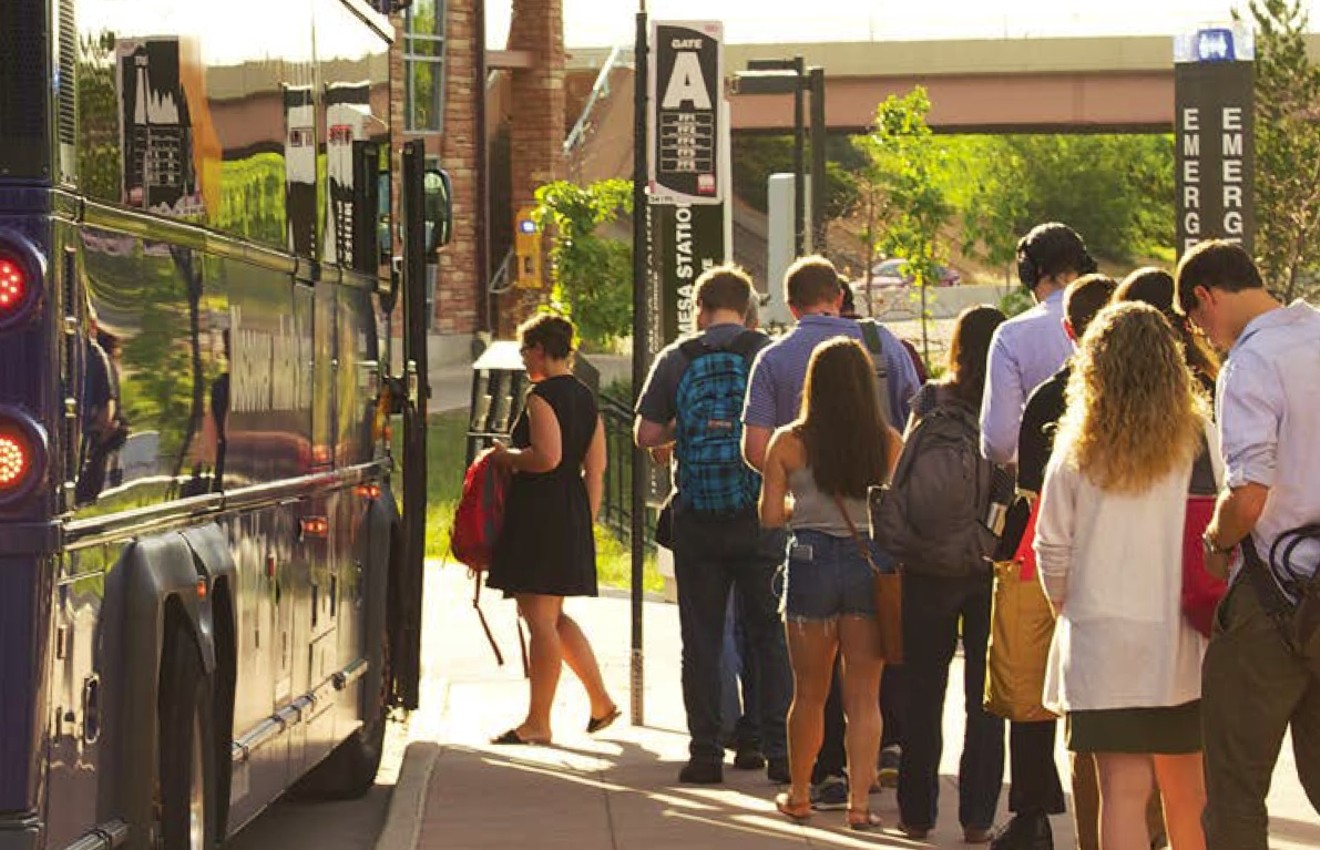 This photo represents only one part of Boulder's demographic, as documented in a new report. Photo by Barbara Colombo courtesy of Community Foundation Boulder County
Around the country, Boulder has a reputation as a youthful, wealthy, lily-white, politically progressive utopia. But the truth turns out to be considerably more complicated. According to "Boulder County Trends," a fascinating new report from the Community Foundation Boulder County that's accessible below, the population in the area is growing older and more diverse in ways that are complicating the interactions of the well-off and their less financially secure neighbors. Moreover, the county's ideology doesn't always translate into fairness or charity in quite the ways most locals likely imagine.

"The data, I think, points to an aspiration toward equity," says Jeff Hirota, CEO for the foundation, which will facilitate a community discussion about the findings on Monday, October 16, in Boulder; details can be found at the bottom of this post. "And that comes up in a lot of different areas, including education, health, the environment and housing — the gap between accessible housing and wages."

The latter topic is a key theme. Foundation vice president of strategic initiatives Chris Barge, a former reporter for the Rocky Mountain News and the Boulder Daily Camera who oversaw the report and wrote much of it, contends that the social issues in Boulder "seem to flow downhill from the skyrocketing cost of housing in Boulder County. We went from a pretty flat market for five years coming out of the Great Recession. But from 2012 up to now, the average home price in the City of Boulder, which we thought was amazingly high at $500,000, has shot up to $850,000. That's just in five years. And even in Longmont, where you used to be able to get a home for the low $200s, the prices are in the high $300s."

As a result, Barge notes, "we're a county that speaks to values of inclusivity and diversity, but this is no longer a place that the lower and middle class can afford to call home."

According to the report, Shannon Axe's family moved to Lafayette because the Boulder Valley School District was willing to respect her identity as a transgender girl.
Photo by Barbara Colombo courtesy of Community Foundation Boulder County
There are exceptions to this rule. Because some people of relatively modest means bought homes in Boulder when prices were more reasonable and have stuck around, Barge points out that "we have a demographic that doesn't match current pricing," albeit one whose long-term presence isn't guaranteed. He recalls "a couple that lived around the corner from me in one of the last affordable neighborhoods in Boulder, Martin Acres, and after 26 years, their landlord kicked them out, flipped the house, sold it and made a mint. This shakeout is going to keep happening, and I think the vector is going to be towards people who come in here with high-salary jobs who can afford to buy a place that's physically unremarkable but whose property value makes it worth scraping and building a nice home on."

That means a person with a blue-collar job who wants to live in Boulder will have to make sacrifices. Barge mentions Cindy Torres, a custodian at CU Boulder whose story is told in the report. "She lives in a mobile-home park a couple of miles from campus and has for a long time, because she likes to be able to commute by bike. She could get a house with three times the space in Thornton, but she's choosing to live in the most modest possible housing at the salary she's bringing home in order not to have to pay for parking or vehicle upkeep."

How so? "The lower-income population of Boulder County is over-represented by Latinos, and that population isn't as visible in the civic conversation," Barge says. "We have four out of 108 elected positions in Boulder County that identify as persons of color. So if persons of color are nearing a quarter of the population but they aren't significantly represented in the civic space, that raises issues for a community that aspires to be inclusive and diverse. Because there are a significant number of people who aren't represented by officials who've lived the same experience as those we're trying to include."

Community Foundation Boulder County CEO Jeff Hirota.
Photo by Barbara Colombo courtesy of Community Foundation Boulder County
To dramatize the potential ripple effects of this situation, Barge points to education. "School systems tend to be built by those who've been at the lectern advocating for what they and their families need. But we've also got a large but quiet population of Latino parents — and because the dollars are so limited, they may not be spent on the kinds of supports and interventions that Latino parents would have us spend them on if they were part of that conversation."

Politically, Boulder officials tend to stand up for people of color, Barge allows: "This is a place where the DA and the local chiefs of police have been very outspoken in their support of DACA students and immigrants. But when it's this expensive to live here, and when most immigrants are in the lower income bracket, it can be hard. We did a survey in our chapter about civic participation and giving and asked which groups are we most and least open to — and we were most open to GLBT people and least open to racial minorities."

Another surprise in the stats mentioned by Barge: "For the first time, seniors have dipped beneath the halfway mark, where most people think we're less open to them as opposed to being more open." That's ironic, since "we're becoming older as a county. There will be more people over 65 in the coming years, while all of the other age bands are going to stay about flat. By the time I retire — I'm 41 — there will be over 100,000 people age 65-plus in Boulder County, compared to 45,000 now. So this is a little warning shot. If we're headed in this direction, we'd better pause a minute and reflect and think about how we're going to prepare, because the overall population is going to get older."

Other aspects of the report speak to progress on multiple fronts, but Barge concedes that the gains may be temporary. "In health care, the uninsured rate over the last four years has been cut by two-thirds; in 2013, it was at 11.8 percent uninsured, and it's at 4 percent uninsured in 2017 due to Medicaid expansion and CHP+ [also known as the Child Health Plan Plus] under the Affordable Care Act. But now there's news that Congress may allow CHP+ funding to expire, and in Colorado, we run out of funding in January. So this allows us to celebrate a 232 percent increase in terms of people locally covered by these health supports — but we don't know where the trend line is going to go."

Sharon Collinge with kids Savannah and Jacob in front of their new home in Lafayette.
Photo by Barbara Colombo courtesy of Community Foundation Boulder County
Likewise, Barge touts a huge decrease in the incidence of teen pregnancy, with much of the improvement related to greater access to IUDs — yet Trump administration cuts in funding for birth control could negatively affect this situation. And then there's support for the arts in Boulder County. "There's no place with more per capita artists than Boulder county outside of Santa Fe and Los Angeles," Barge says — but because the average income for an artist in the area is $24,000 per annum, there's no telling how many of them will be able to maintain residence in such a pricey area for the long haul.

Barge also cites a mixed picture when it comes to Boulder County residents' support for the most challenged among us. "Boulder and Boulder County are on the leading edge when it comes to passing taxes for open space and supporting mill levies for schools and the public good, and surveys show that 55 percent have volunteered in the past year — and the national average is 25 percent. But on the other hand, we're in the bottom third in terms of generosity of the 64 counties in Colorado — and Colorado is really on the back end in terms of percentage of our gross income that we give to charity."

He concedes that these last figures "cut counter to how people perceive their own culture in Boulder County. They think of us as generous and progressive, but it turns out that our secular culture, a high turnover among residents and a small and diffuse local fundraising infrastructure have made us less generous than we might expect."

CEO Hirota hopes data like this will serve as "a call to action" for Boulder County residents, as well as an opportunity to talk about "the kind of community we want to be."

The next chance to take part in the conversation takes place from 8 to 9:30 a.m. on October 16 at the Boulder Jewish Community Center, 6007 Oreg Avenue. Register for the free event here, and click to read the 2017-2020 Boulder County Trends report.