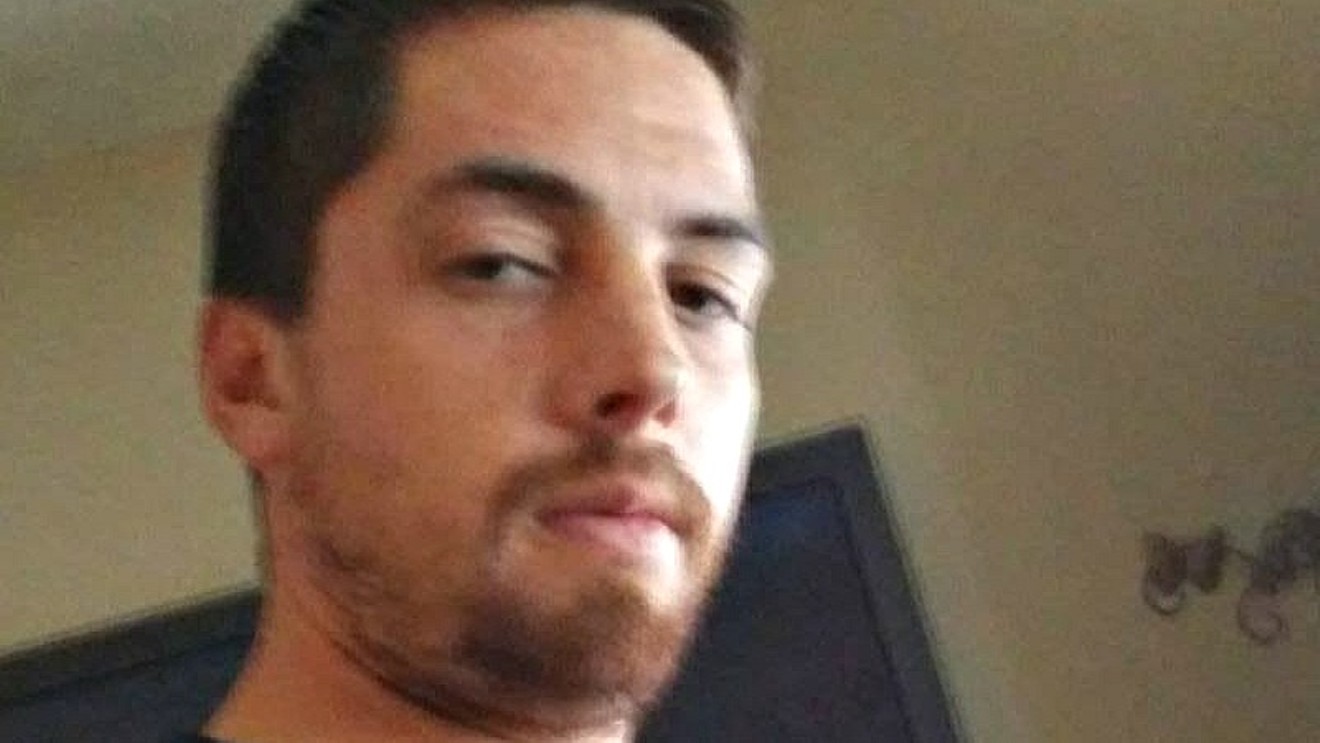 A Facebook photo of Brian Lucero. Facebook
Brian Lucero has been identified as the victim of a fatal stabbing in the parking lot of Torchy's Tacos, near the intersection of 11th and Broadway, early on May 23. Christian Gulzow, a Denver-area death-metal singer with a substantial criminal record, has been arrested in the death of Lucero, a transient whose fate is evidence of the dangers regularly faced by members of the homeless community.

As noted in our original coverage of the incident, Denver police officers who responded to the reports of a disturbance near Torchy's ultimately used crime-scene tape to isolate the 1000 block of Broadway's west sidewalk from just past EZPAWN, at 1025 Broadway, to the 11th and Broadway intersection. The pawn shop is around fifty yards from the front door of Westword, located at 969 Broadway.

Our initial piece also mentioned a man shouting outside the Corner Store, a convenience shop and gas station at 1001 Broadway. The business is a frequent gathering place for transients during the 4-4:30 a.m. time period when I typically arrive at the office, as is the area as a whole. On two recent mornings, I've arrived at Westword to find someone sleeping in the recessed area in front of the main entrance.

The probable-cause statement in the May 23 homicide includes information from witnesses who say the altercation between Lucero and Gulzow began at the Corner Store before continuing north up the 1000 Broadway alley toward Torchy's. Lucero was found in the restaurant's parking lot with a stab wound to the neck; he was declared dead shortly after his arrival at Denver Health Medical Center.

Gulzow's face is said to have been covered in white makeup with black streaks at the time of the killing. He also allegedly wore spiked gloves with blades for each finger. Here's a Google Plus image of him sporting a similar look.

CBS4 reports that Lucero was a "well-known transient in the neighborhood." But to his brother Jason, he was much more than that.


Well today I received the news I never wanted, but was always unfortunately expecting. My brother was taken from us last night, though I was not given a lot of information other than he was found injured in Denver and later died at a nearby hospital. A suspect is in custody for 1st degree murder. Those who were close to him know the kind heart he had, though he was always walking down his own path and no one could make him change course no matter how much we tried. I will always cherish the good and bad times we had, and wish there were many more opportunities to come to be together again. I love you so so much Brian Lucero and miss you already as I have these past few months. Please keep my family in your prayers.

In a subsequent reply to the many expressions of condolence his post prompted, Jason noted that preliminary plans call for a service to remember Brian on Sunday, May 28.

Another person who knew Brian agreed that he had "a kind soul." And then there was this:


R.I.P. Brian Lucero. After 14 years of friendship, You will be missed. Sad to see another young soul taken at such a young age!!! Hope you're in a better place now!!!! Love & light goes out to your family & our close friends!!!

At the time of his death, Brian Lucero was 29 years old.