Update: Christian Gulzow, 36, has been arrested in what the Denver Police Department has now confirmed was a homicide that took place early this morning near the Torchy's Tacos branch at 1085 Broadway. According to the probable cause statement, accessible below, Gulzow's face was covered in white clown-like makeup and he wore blade-supplemented gloves that recall those associated with fictional ghoul Freddy Krueger in the Nightmare on Elm Street horror-film series when he killed a man just identified by the Denver coroner's office as Brian Lucero, 29.

As noted in our original coverage, on view below, officers were called at 12:49 a.m. on Tuesday, May 23. According to the aforementioned report, they arrived at the crime scene, located near the intersection of 11th and Broadway, to find Lucero, who had a visible stab wound to the throat. He was transported to Denver Health Medical Center but failed to respond to treatment. Time of death was 1:11 a.m.

In the meantime, the police report continues, witnesses were interviewed at Denver police headquarters. They told investigators that Lucero had gotten into an argument with a man with white facial makeup marked by black streaks and gloves with blades estimated at two to three inches in length extending from each finger.

The spat reportedly began at the Corner Store, at 1001 Broadway, after the gloved man threatened Lucero. Attempted punches were exchanged before Lucero headed north up the alley behind the convenience store. The man in the killer clown makeup followed him to the Torchy's parking lot, where other witnesses saw Lucero collapse.

A search of recordings captured by nearby HALO cameras provided the next lead. Video showed a man matching the attacker's description riding a scooter on the 900 block of Galapago and tossing an object into the bushes. That object turned out to be a knife covered in blood.

Also bloody was the clothing worn by Gulzow when he was taken into custody near the intersection of Alameda and Lipan. During a subsequent interrogation, Gulzow is quoted as saying that Lucero had tried to steal his scooter, leading to a physical altercation and a hard fall. He speculated that Lucero had been hurt when he'd jabbed a glove in his direction — or perhaps he landed on a spike from his wrist bracelet.

Gulzow is being held on suspicion of homicide. Click to read the probable cause statement and continue for our previous coverage. 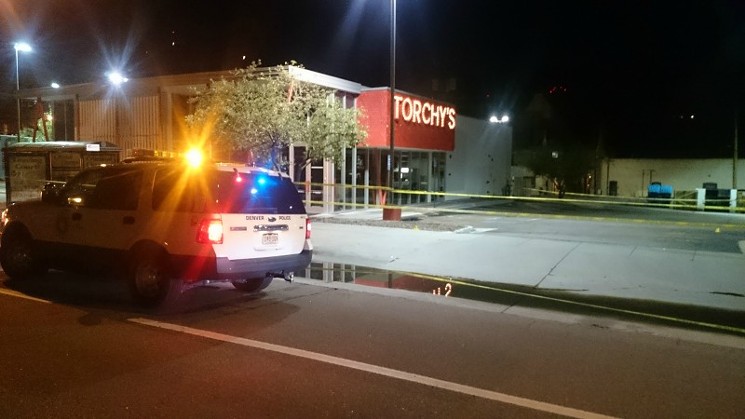 The scene overnight near Torchy's Tacos at 11th and Broadway. Additional images below.
Photo by Michael Roberts
Original post, 5:35 a.m.:The Denver Police Department is probing what an officer at the scene calls a homicide near the 1085 Broadway location of Torchy's Tacos. At this writing, the DPD is officially referring to the incident, which took place early on Tuesday, May 23, as a death investigation.

Given that Westword's offices are located just down the street, at 969 Broadway, I had no difficulty finding the nexus of activity. Crime-scene tape cordoned off an area just north of the EZPAWN, at 1025 Broadway — around fifty yards from our main entrance — and continued up the west side of the block past Torchy's to the corner of 11th and Broadway.

Like all too many Denverites these days, I had stumbled upon what appeared to be a crime scene — whether it ultimately proves to be one or not.

Upon my arrival just shy of 4:30 a.m., a number of police vehicles were parked along the block, overhead lights flashing. The couple of rides nearest the intersection, directly across from the Metlo, at 1111 Broadway, were being loaded with bag after bag of what was presumably evidence. 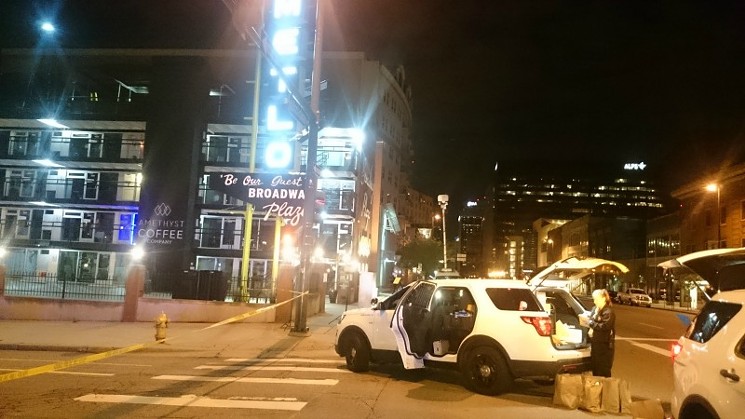 An officer catalogues bags of evidence near the scene.
Photo by Michael Roberts
Crews from multiple local TV news stations, no doubt drawn by a DPD tweet ("#DPD investigators are on-scene @ 11th & Broadway conducting a Death Investigation. #Denver") sent out at 1:53 a.m., kept at least a side eye on the activity. At that point, it was too early for a live shot.

Meanwhile, several squad cars idled near Torchy's, where three officers were huddled in conversation. When I asked them what had happened, one said, "We're investigating a homicide."

He replied to a follow-up request for more information by saying, "It's under investigation" and referring any additional questions to the on-call public-information officer.

The PIO on duty this morning was technician Tyrone Campbell, whom I subsequently reached by telephone. 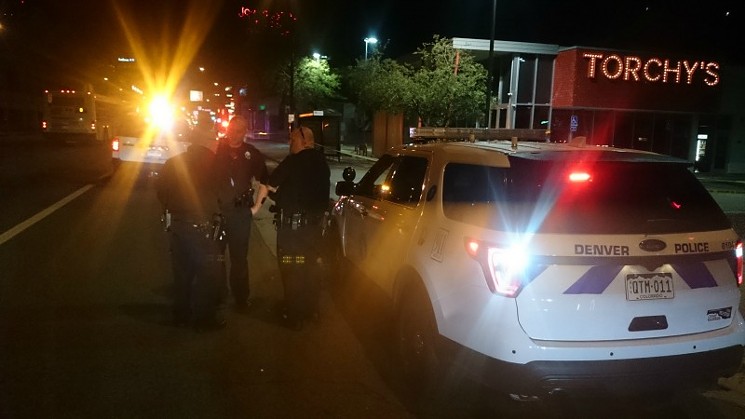 Beyond these statements, the only other detail Campbell provided was the time of the first call to the department about what happened: 12:49 a.m.

Thus, we don't know anything about the victim at this writing — even the gender — or the circumstances of the death.

Because of the early hour, the police presence hadn't drawn a crowd during the time of my visit. The other person in the vicinity, not counting officers and media members, was a man shouting outside the Corner Store gas station and convenience shop, at 1001 Broadway. "There are 3,000 fucking things going on!" he yelled. Then, seemingly in reaction to the sound of his own voice, he added, "I am the echo!"

Just another day in Denver, Colorado. 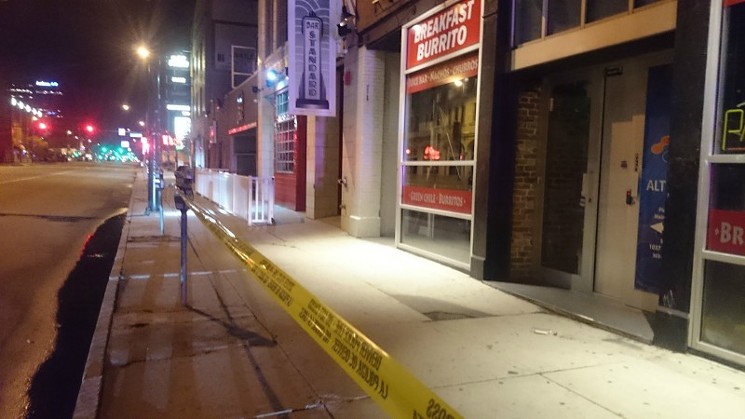 Toward the south end of the crime-scene tape.
Photo by Michael Roberts
KEEP WESTWORD FREE... Since we started Westword, it has been defined as the free, independent voice of Denver, and we'd like to keep it that way. With local media under siege, it's more important than ever for us to rally support behind funding our local journalism. You can help by participating in our "I Support" program, allowing us to keep offering readers access to our incisive coverage of local news, food and culture with no paywalls.
Make a one-time donation today for as little as $1.