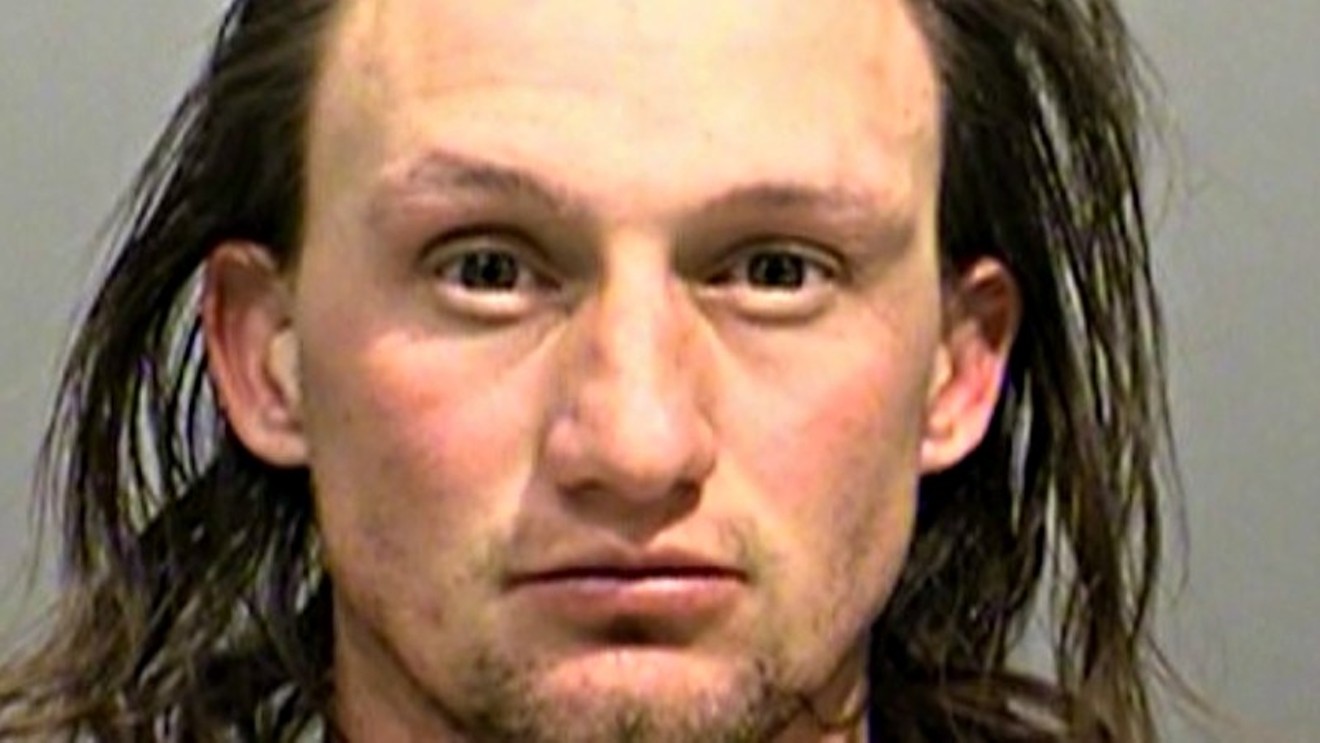 Bruco Eastwood's booking photo after being arrested for the 2010 shooting at Deer Creek Middle School. File photo
Next week, on Friday, December 15, a judge will determine if Bruco Strong Eagle Eastwood will be allowed to venture unsupervised off the grounds of the Colorado Mental Health Institute in Pueblo, where he's resided since being found not guilty by reason of insanity for shooting and wounding two students at Deer Creek Middle School seven years ago. Among those who strongly oppose this idea are Pete Weir, current DA in the First Judicial District, where Eastwood was prosecuted, and the family of Matt Thieu, who survived after Eastwood shot him in the torso.

A letter attributed to Thieu's family and friends (it's accessible below) cites "Eastwood's criminal, sexual and psychiatric history" as reasons for objecting to increased freedoms. They add: "We are happy that Eastwood has stabilized his mental illness with medication. However, we believe that allowing such privileges will only open the door for more crime on behalf of Eastwood's mental illnesses. If Eastwood cannot distinguish 'right from wrong,' the probability of him doing something similar again is high."

Weir, for his part, has filed a formal objection to the Colorado Mental Health Institute request on Eastwood's behalf; it can also be accessed at the bottom of this post. "Our concern is exacerbated with Mr. Eastwood due to the violent nature of the crime and just how ill Mr. Eastwood was at the time," he says. "Many of the doctors who talked about the severity of Mr. Eastwood's illness are from the same facility as the ones who are now saying he's under control and okay going back into the community — so you can see why there's a healthy dose of skepticism. It's our sense of responsibility to the community to keep him in a situation where we're confident we're not endangering the public."

In a post published the morning after the shooting, I noted that the February 23, 2010, incident struck very close to home for me. All three of my children went to Deer Creek, with my twin daughters leaving the school just three years earlier — and while they attended, they took seventh-grade math classes from Dr. David Benke, who was credited with preventing an even greater tragedy. Moreover, my niece and goddaughter was on a bus outside the school at the moment that Eastwood opened fire nearby. She's still dealing with the trauma of what she witnessed more than half a decade later.

A look at Deer Creek Middle School.
File photo
As we've reported, Eastwood had a history of mental problems well before his fateful visit to Deer Creek. After an arrest in 2002, for example, he was placed on a mental-health hold because he thought voices were coming from a Nielsen ratings box attached to his television — and he continued to hear such voices in the years that followed. He was also reportedly afraid that imaginary creatures were stealing food from his stomach.

Against this backdrop, Eastwood left the Hudson home he shared with his dad around midday on the 23rd, armed with a loaded hunting rifle he took from his father's closet. After stops at Dick's Sporting Goods to buy more ammo and lunch at a McDonald's, he arrived at Deer Creek and parked in a lot across the street from the school. A custodian saw him there and encouraged him to check in at the office, which he did, obtaining a visitor's badge.

When the school bell rang at 3:05 p.m., kids began exiting the school. Eastwood soon approached a group of girls and asked if they went to school there. After one answered in the affirmative, he revealed his rifle and fired a shot, striking a student named Reagan Weber in the arm.

As the girls ran, Eastwood reloaded and squeezed off another shot, this time hitting Thieu, who suffered a punctured lung and broken ribs. But before any more children were injured, Dr. Benke tackled Eastwood and held him down until authorities arrived.

Matt Thieu in a school photo circa 2010.
File photo
Both Weber and Thieu recovered from their physical wounds, though the aforementioned letter says Matt continues to suffer from post-traumatic stress disorder related to the shooting, which left him in critical condition at Children's Hospital for several days.

While in custody, Eastwood exhibited plenty of bizarre behavior — such as picking at his skin in an attempt to remove the "transforming forces" from his body. But he also told officers that he'd attended Deer Creek for a time back in 1991, after his parents were divorced, and felt ostracized and bullied by "rich kids."

Eastwood entered a not-guilty-by-insanity plea the following July, and doctors diagnosed him as a schizophrenic whose actions were dictated by delusions and audio hallucinations — those voices. And while prosecutors made it clear they thought Eastwood had acted deliberately, the jury disagreed, at least in part.

"It was a strange verdict," concedes Weir, who began working as senior chief deputy district attorney in the First Judicial District circa 2010 but wasn't directly involved in Eastwood's prosecution. "He was found not guilty by reason of insanity for attempted first-degree murder and assault, but guilty of possessing a weapon on school grounds." For the latter, Eastwood was given an eighteen-month prison sentence that a judge determined had been already been completed because of the time Eastwood had spent in custody before the trial.

After the shooting, Regan Weber posted this Facebook photo of her giving a double thumbs-up.
File photo
These results struck Weir as "a really fine splitting of hairs. From a legal standpoint, we looked at the verdicts closely, and we concluded that the jury felt he was not as diseased when he possessed the weapons, but he decompensated further when he used the weapons. It was puzzling from our perspective, but legally sustainable."

Weir's objection to changing Eastwood's current status represents something of a pivot for the DA's office, as he acknowledges. "I don't think anyone at the time of the trial disputed that Mr. Eastwood had significant mental-health problems in general. Anyone who commits a serious crime or has murdered isn't wired quite right. But the law requires that this condition be of such a significant nature that it exempts him from criminal culpability, and based on the information we had at the time, we didn't believe that his mental disease and defect rose to the level where he was wasn't criminally culpable for his actions. And now we have to turn around and argue the other side of it."

Today, Weir believes that "Mr. Eastwood had suffered from persistent, serious mental-health problems at the time of the crime, and we need to proceed with extraordinary caution when folks tell us that with proper medication, they're safe to go back into the community, much less to take it to the next step and say they're safe to go back in the community in an unsupervised fashion."

This last distinction is important. In 2015, the Colorado Mental Health Institute asked that Eastwood be given what's technically known as a "Temporary Physical Removal" increase that would allow for off-grounds privileges if he was under supervision. A judge granted this request on the condition that Eastwood be required to wear a GPS monitor for limited periods of time. The new filing suggests that he succeeded in this scenario, encouraging hospital personnel to lobby for the removal of additional restrictions.

First Judicial District DA Pete Weir.
File photo
According to Weir, the Colorado Mental Health Institute's first priority is to return mentally ill individuals to health, so that they can rejoin the community as a whole. But in his view, this goal can get tricky when the person in question has committed a violent crime.

"There's probably a misperception on the part of the public when somebody is found not guilty by reason of insanity for a homicide," he allows. "They think they'll spend a lengthy time in state hospital, but a few years ago, there was a study that estimated people found not guilty by reason of insanity in murder cases were hospitalized for about seven years, on average. That's not consistent with the public image of 'Oh, my gosh, these people will be locked up for a long, long time.' The turnaround is relatively brief — and there's also pressure to have beds available for others."

Most people released by the Colorado Mental Health Institute after doctors determine they've been returned to sanity do well. But there are horror stories, including one cited by Weir that we'll detail in an upcoming post. In the meantime, click to access a collection of 2017 Bruco Eastwood documents, including the notice regarding the latest notice for Temporary Physical Removal, Weir's objection and the letter on behalf of Matt Thieu.