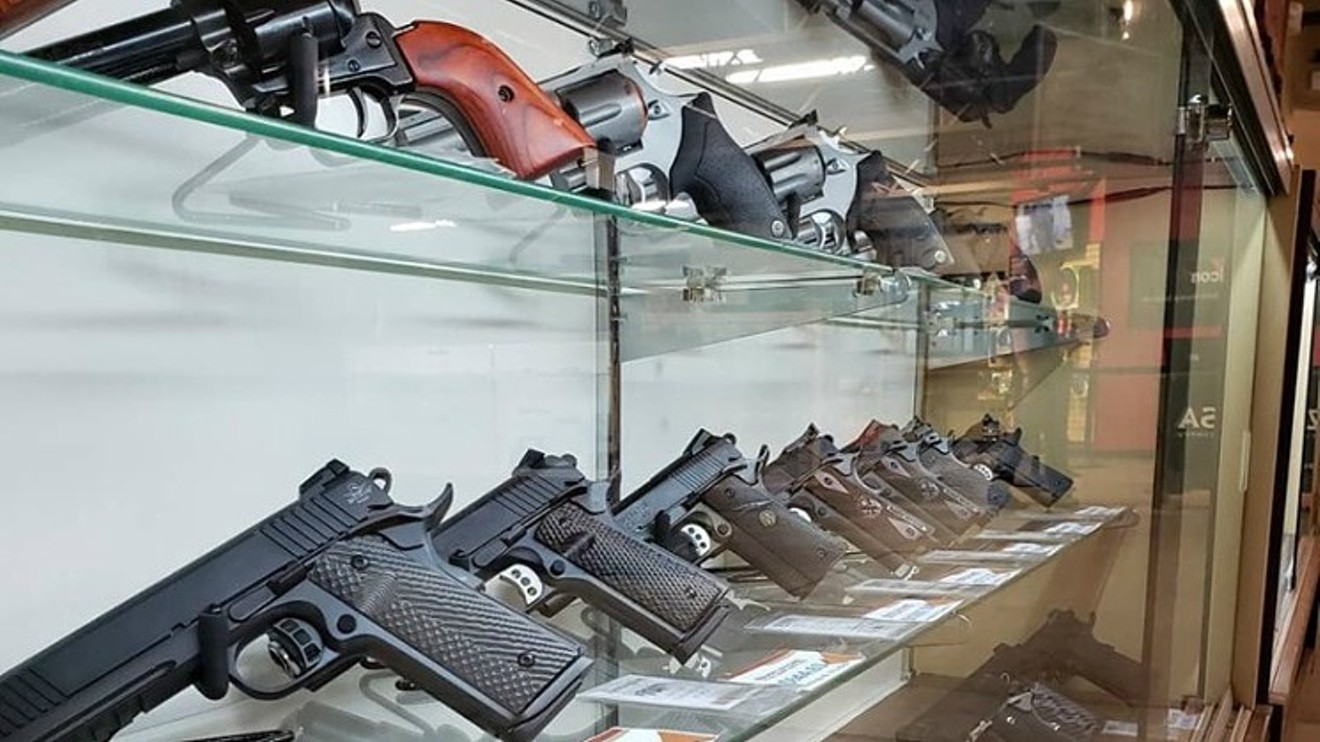 Firearms for sale at Bristlecone Shooting, Training & Retail Center in Lakewood, which has offered to temporarily store weapons restricted under extreme-risk protection orders. Bristlecone Shooting, Training & Retail Center
The gunman in the November 19 attack on Club Q in Colorado Springs, which killed five people and injured nineteen, was arrested in June 2021 following a bomb threat at his mother's home. But despite evidence that the suspect was suffering from mental health issues, neither family members nor police agencies attempted to restrict his access to weapons under Colorado's red flag law, which allows guns to be taken away from individuals deemed a danger to themselves and others.

Had such an effort been made, would it have made a difference? Statistics related to so-called extreme risk protection orders in El Paso County, which encompasses Colorado Springs, raise doubts. Even though officials declared the area a red-flag sanctuary in which the law wouldn't be enforced, the county generated the second-most ERPO requests in the state from January 1, 2020, when the law went into effect, through December 31, 2021. But only about 10 percent of the petitions resulted in year-long restrictions.

The El Paso County Sheriff's Office had experience with the gunman. An EPCSO news release noted that at around 1:56 p.m. on June 18, 2021, deputies responded to a report of a bomb threat at the home that Anderson Lee Aldrich shared with his mother, later identified as Laura Voepel, on the 9800 block of Rubicon Drive. Voepel, who'd had previous brushes with law enforcement (the Denver Gazette reported that she was arrested for suspected arson nearly a decade earlier before pleading guilty to a lesser charge) said that her son was "threatening to cause harm to her with a homemade bomb, multiple weapons, and ammunition. The reporting party was not in the home at the time when she made the call and was not sure where her son was."

Deputies soon traced Aldrich to the 6300 block of Pilgrimage Road, about a mile from his house, but when they reached him by phone, "he refused to comply with orders to surrender," according to the sheriff's office. At that point, the CSPD's tactical-support unit, including a crew with expertise in explosives, was dispatched, and several hours later, at approximately 4:15 p.m., about ten nearby homes were evacuated, with a text notification to other residences following shortly thereafter.

At 5:46 p.m., negotiators convinced Aldrich to surrender, and while no explosives were found at the residence, he was booked into El Paso County jail on two counts of felony menacing and three counts of first-degree kidnapping.

A month after the arrest, in a Facebook item obtained by Heavy.com, Voepel wrote, "Does anyone know of a fantastic defense attorney? I ask this with a heavy heart but my family really needs some help at this time." And this past February, she posted, "Can anyone please recommend a great trauma/ptsd therapist" for a 21-year-old — the age of the gunman at that time.

Following the Club Q attack, the Daily Mail obtained livestream video captured by the gunman during the incident. In one segment, the suspect, wearing a ballistic vest, said, "This is your boy. I've got the fucking shitheads outside. Fucking shitheads got their fucking rifles out. If they breach, I'm [going to] blow it to holy hell. Come on in, boys, let's fucking see it!"

At this point, it's not known if the gunman received therapy. But Colorado's extreme risk protection order statute, signed in 2019, specifically states that at a hearing for either a temporary or year-long ERPO, "the court shall consider any available mental health evaluation."

Statistics obtained by Westword show that 39 petitions for protection orders were filed in El Paso County in the first two years after the law went into effect: 25 for temporary restrictions lasting two weeks, fourteen calling for restrictions lasting a year. Only Denver County, with 67 total petitions, had more. Of the temporary petitions in El Paso County, eighteen were denied, while seven were granted — and four of the latter transitioned into year-long restrictions. But none of the petitions that asked for immediate year-long restrictions were granted, and no motions for renewal were filed.

Even if the gunman's access to weapons had been restricted for a year immediately following the June 2021 incident, he would have been able to lawfully possess them again months ago without an extreme risk protection order renewal. Had that been issued, it might well have been a first for El Paso County, which is currently reeling from the Club Q tragedy.
KEEP WESTWORD FREE... Since we started Westword, it has been defined as the free, independent voice of Denver, and we'd like to keep it that way. With local media under siege, it's more important than ever for us to rally support behind funding our local journalism. You can help by participating in our "I Support" program, allowing us to keep offering readers access to our incisive coverage of local news, food and culture with no paywalls.
Make a one-time donation today for as little as $1.