The United States worked to evacuate tens of thousands of Afghan nationals in August. Twitter
click to enlarge 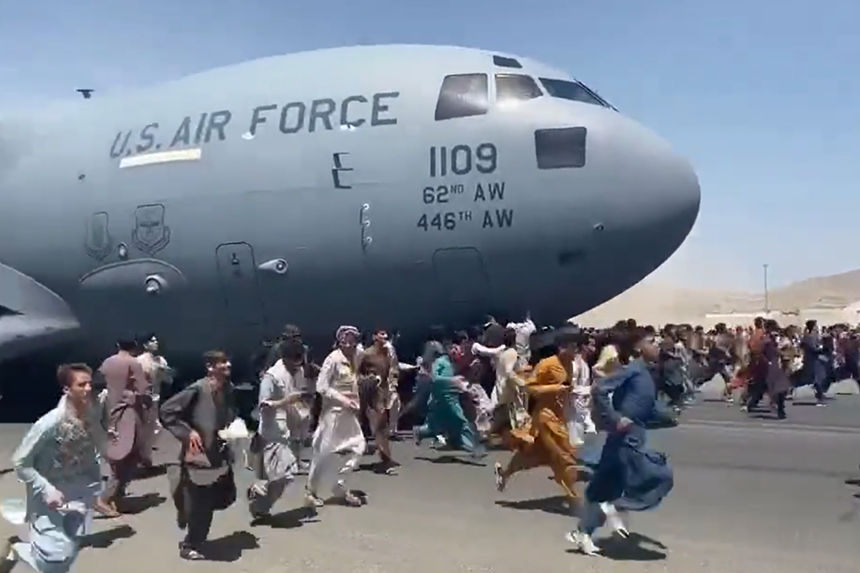 The United States worked to evacuate tens of thousands of Afghan nationals in August.
Twitter
Following the August evacuation of over 100,000 people from Afghanistan, Colorado expects to receive around 1,500 Afghan refugees over the next year.

"Colorado has been a real place of welcome for refugees for a long time," noted Meg Sagaria-Barritt of the Colorado Refugee Services Program during a September 20 town hall about Afghan refugee resettlement in this state.

Ninety percent of the Afghans who come to Colorado will be resettled in metro Denver, while the remaining 10 percent will end up in the Colorado Springs area. Only a handful of Afghans have already landed in Colorado; arrivals are expected to increase in mid-October and continue through the end of the year.

While some of the Afghans who come to Colorado will be recipients of Special Immigrant Visas for people who have assisted the U.S. mission in Afghanistan over the past two decades, the vast majority will be here on humanitarian parole status, a tool used by the U.S. government during emergencies.


Humanitarian parole recipients are ineligible for many of the state and federal benefits that those with Special Immigrant Visas will be able to access. But Congressman Jason Crow, a Democratic combat veteran whose district includes Aurora, is pushing a measure that would change that.

"Our bill will include a one-year status to normalize individual status and provide work permits and allow them to access normal refugee resettlement benefits that would normally be available to a refugee, that is not available to a person who's paroled," Crow said during the town hall. That bill will also include a path toward permanent residency and citizenship for Afghan refugees who have been granted humanitarian parole.

Colorado has become home to more than 60,000 refugees from around the globe since 1980; it already has large Afghan communities, primarily in the northern section of the metro area.

"We've welcomed Afghans, we've worked with Afghans, and Afghans themselves are committed to making Colorado a home," Sagaria-Barritt said, adding that over the last five years, Afghans have been the top nationality for refugee resettlement in the state.

"Donations are going to be really key for us to be able to offer stability and opportunity for the newcomers and the way that Colorado has and always wants to be able to do," said Kit Taintor, director of the Colorado Office of New Americans, created this summer after Governor Jared Polis signed House Bill 1150, which was sponsored by representatives Iman Jodeh of Aurora and Julie Gonzales of Denver. The office, which is in the Department of Labor and Employment, is designed to provide support to immigrants and refugees as they build new lives in Colorado, including by implementing an immigrant integration plan.

Colorado's three resettlement agencies — the African Community Center, the International Rescue Committee, and Lutheran Family Services — are hoping to link up with potential employers to find jobs for the new arrivals.

"A lot of Afghans are going to come over with backgrounds in interpretation, construction, accounting — all of those sorts of background functions that make our military operate," Taintor explained.

Resettlement agencies are looking for Dari and Pashto speakers to help with interpretation. They're also seeking landlords who can offer long-term rental housing. "Housing stability is the key to making sure that people get started on a good foot here in their new home of Colorado," Taintor added.

Thanks to the passage of Senate Bill 199, regardless of their immigration status, Colorado residents are able to access certain public benefits, including housing assistance.

To help the new arrivals, the Rose Community Foundation has set up the Colorado Afghan Evacuees Support Fund, which will send money toward organizations in Colorado that work with refugees.
KEEP WESTWORD FREE... Since we started Westword, it has been defined as the free, independent voice of Denver, and we'd like to keep it that way. With local media under siege, it's more important than ever for us to rally support behind funding our local journalism. You can help by participating in our "I Support" program, allowing us to keep offering readers access to our incisive coverage of local news, food and culture with no paywalls.
Make a one-time donation today for as little as $1.