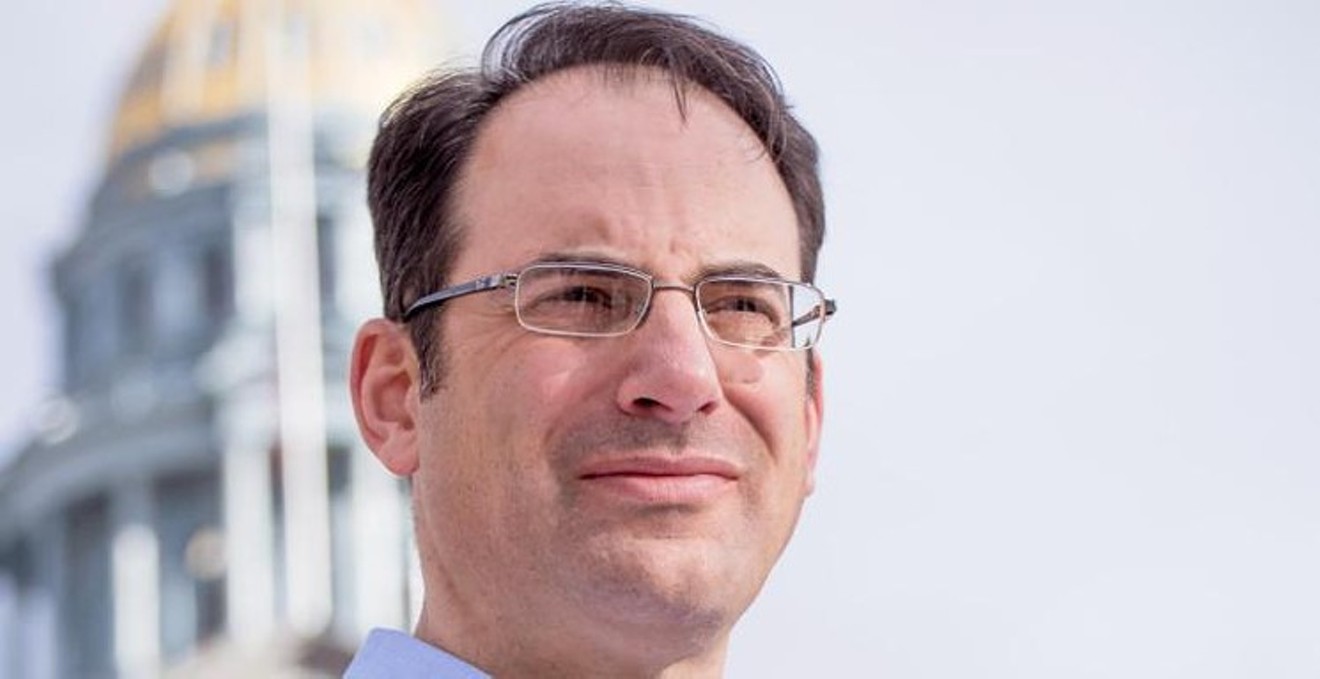 Democratic nominee Phil Weiser is running against George Brauchler in the November race for state attorney general. Phil Weiser
On Thursday, October 4, more than 300 people gathered at a church in Commerce City, expecting to hear gubernatorial candidates Jared Polis and Walker Stapleton and attorney general candidates George Brauchler and Phil Weiser speak about immigration, health care and education funding, among other hot topics. But there was one issue: Only Weiser showed.

"I'm embarrassed on behalf of the other candidates who aren't here," he told the crowd.

Stapleton and Brauchler had notified the organization behind the event — Industrial Areas Foundation of Colorado, which bands together congregations, schools, unions and nonprofits — that they could not attend. Polis said he was coming, but bailed at the last minute. His name was still on the event program.

The candidates who didn't show missed a prime opportunity to make final campaign pitches about some of the most important issues motivating voters before they head to the polls next month. And their absences gave Weiser a chance to shine alone in the spotlight.

"Tonight, Mr. Phil Weiser, candidate for attorney general...he showed up," said Pastor Reagan Humber of House for All Sinners and Saints to applause. "And for that we are grateful."


"She never gave up hope. In this moment, we cannot give up hope."

Humber then spoke about the other candidates. "They didn't show up," he said, at which point one audience member stood up and yelled, "Shame!"

The event, which brought together a racially- and religiously-diverse cross-section of the community, began with a speech by Jordan Forstot, who spoke about his six-year-old son with leukemia. Forstot expressed concerns about his son's future and said that his illness may be considered a pre-existing condition, which could disqualify him from receiving affordable health care. Then Julia Constantino, who spoke in Spanish through a translator, told the crowd about her colleague's husband being deported and separated from his family last week. Constantino is now worried about what will happen if she is separated from her only son because of immigration issues.

The event gave Weiser a prime opportunity to capitalize on his time alone on stage and he did just that, connecting with the audience as soon as he got up. Without a rival candidate on hand, Weiser was able to focus less on confrontation and more on his own background.

His mother was born in the Buchenwald concentration camp in Nazi Germany on April 13, 1945. A day later, American soldiers liberated the camp, and his family then came to the U.S. to seek the American dream. "They were welcomed," he told the crowd.

He then shared his grandmother's philosophy as a guiding point for the present day. "She never gave up hope. In this moment, we cannot give up hope," he said.

After talking about his background, Weiser opened up about his own political philosophies.

He spoke about getting dark money out of politics in Colorado and called Citizens United "the worst Supreme Court decision of [his] lifetime." He also reasserted his plan to continue pushing for more gun safety and said that he would enforce immigration policies "legally, fairly and humanely."

"This is America. We don't separate families at the border," he said, to raucous applause.

Weiser's best moment came toward the end of his speech, when he made a final pitch to the crowd. "I'll be a stronger, I'll be a fairer, and I'll be a 'Weiser' attorney general."

Elizabeth Reder, an IAF Colorado spokeswoman, said that the other candidates might have skipped the event to attend fundraisers in the crunch time before election, and added that she expects more candidates to come out the next time Industrial Areas Foundation of Colorado organizes a pre-election event.

After the event concluded, Weiser made his own feelings about the IAF — which calls itself "the nation's largest and longest-standing network of local faith and community-based organizations" — and the event clear.

"People are powerful when they are united," he said. "That's what this is about. This is such an important forum. Now that I've seen it, I believe in it more. I'll do my best to get the other candidates here next time."
KEEP WESTWORD FREE... Since we started Westword, it has been defined as the free, independent voice of Denver, and we'd like to keep it that way. With local media under siege, it's more important than ever for us to rally support behind funding our local journalism. You can help by participating in our "I Support" program, allowing us to keep offering readers access to our incisive coverage of local news, food and culture with no paywalls.
Make a one-time donation today for as little as $1.