Adrian Dater: Only Colorado Writer in NHL Bubble Tells All 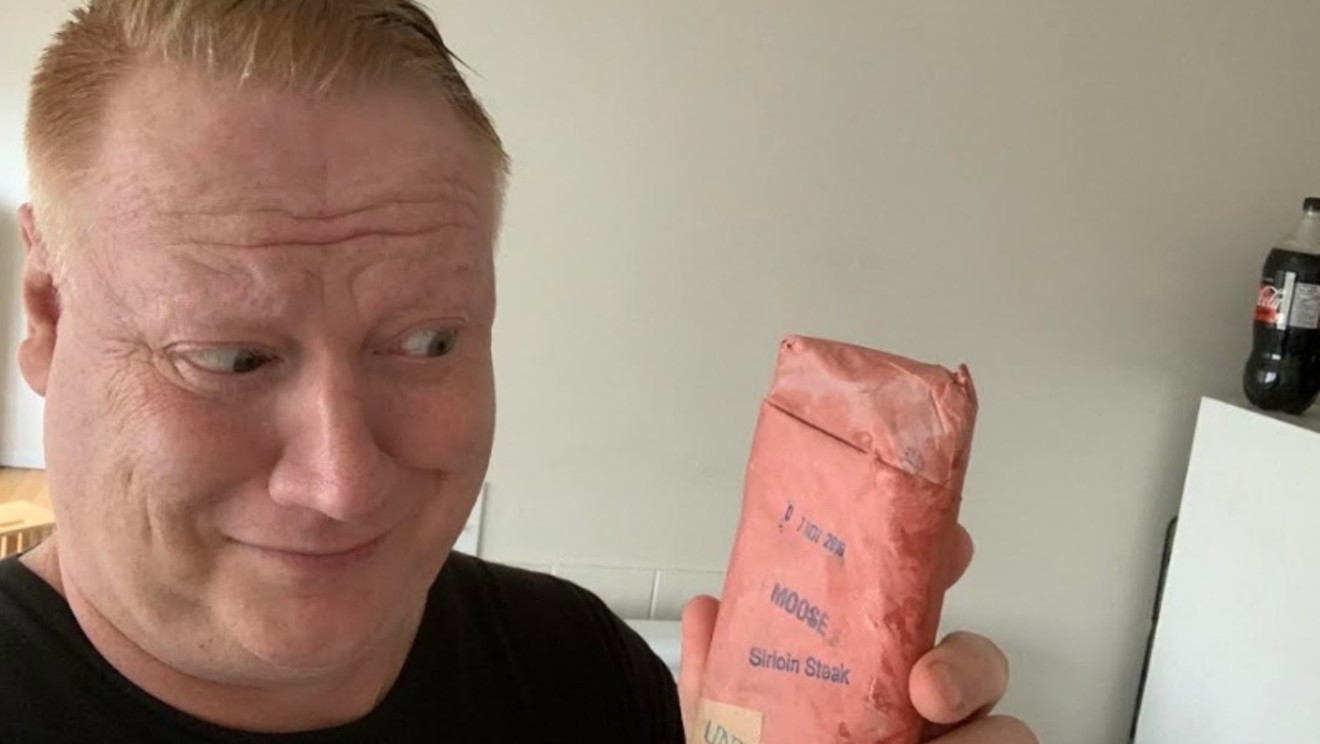 Adrian Dater eyeballing a slab of moose meat he found in the freezer of his Edmonton Airbnb. Photo courtesy of Adrian Dater
In just three more days, Adrian Dater is a free man — or at least free to leave his Airbnb.

Dater, a former Denver Post writer who now runs Colorado Hockey Now, far and away the best source of news and opinion about the Colorado Avalanche, is currently undergoing a mandatory, fourteen-day quarantine period in Edmonton, Canada, so that he can cover the National Hockey League playoffs in person beginning on August 1.

According to Dater, he's one of just two hockey journalists from the United States not directly affiliated with the league or NBC, its official American broadcast partner, to make this commitment: Sarah McLellan of the Minneapolis Star Tribune, who has dual citizenship, is the other. And the costs related to sending a reporter to another country amid a global pandemic aren't the only reasons for this tiny turnout. There are also the strict rules imposed around the so-called bubbles that the NHL has created in Edmonton and Toronto, the other hub city for the playoffs, to prevent the sort of COVID-19 outbreak that's currently placed the Major League Baseball season in jeopardy.

"So how the bubble works is, there's no media that can be in the actual bubble, which is the Edmonton JW Marriott and a couple of other hotels around the arena," Dater explains. "The arena itself is a bubble, too, and the ironic part is, I can go into the arena and watch the game, and other games, but I'm not going to be able to be in the bubble-bubble of the hotel, where the players are. I'm not going to be able to go onto the ice level near the players. And I can't go into the locker room, of course. All interviews will be done via Zoom."

Given these restrictions, most news organizations have decided to cover the NHL playoffs remotely. "A lot of reporters and sports reporters rightly said, 'Why should I spend thousands of dollars for my reporter to go there and they're going to get the same damn interviews on Zoom?'" Dater notes. "But that's not the way I'm built. It doesn't make me a hero or anything, but I just need to be where the action is, and I'll do what it takes."

Back when he was the Post's man on the Avalanche beat, such ingenuity wasn't necessary; he would simply have hopped on a jet and expensed the whole shebang. But life got a lot more complicated in 2014, when Dater was sacked by the paper over missteps on Twitter. And unlike veteran TV weather forecaster Marty Coniglio, who just parted ways with 9News after tweeting a photo of World War II-era Nazis in reference to federal troops pouring into Portland, Oregon, his messages weren't political. First, Dater was suspended for using the platform to call one player a "pussy" and advising someone corresponding with him to "fuck off." Then, a couple of months later, he was given his walking papers after what we described at the time as "a strange come-on to a Detroit Red Wings Fan."

In announcing his departure from the Post, Dater revealed that he was dealing with substance abuse, and cleaning up and rebuilding his life and career wasn't easy. "I went from being a spoiled, entitled sportswriter riding in big planes and staying in nice hotels to shoveling snow in an elementary-school parking lot where I was working as a substitute gym teacher three months later," he recalls. "I was thinking, 'How did I get here?' It's been a journey back, and I think I'm the better for it. ... What happened may have been a good thing in the sense that it finally forced me to change some things, things that had been festering."

An example of Dater's luxurious accommodations in Edmonton.
Photo courtesy of Adrian Dater
In the years that followed, Dater landed a gig writing about the Avs for BSN Denver, which subsequently rebranded as the digital sports network DNVR. But last year, he decided it was time to be his own boss and launched Colorado Hockey Now, an affiliate of the larger National Hockey Now network. The site is subscription-based, and it's proven popular enough that Dater has actually been able to pay some freelancers to supplement his own writing about the squad. And even though the interruption of the season owing to the novel coronavirus made it difficult to attract new readers willing to pay for access, his renewal rate is currently running at around 85 percent — a remarkable achievement under the circumstances.

Better yet, the site has a tip jar that collected enough contributions to pay for Dater's airfare to and from Canada and accommodations throughout the playoffs. Still, he isn't staying in princely splendor. "The NHL said, 'We got a great rate on hotels,' but it was well over $100 a night even with the Canadian exchange rate — which is another reason a lot of people aren't coming," he reveals. Instead, he booked an Airbnb for just $25 per night: "It's a pretty nice two-bedroom downtown, and even though they say it's sort of a tough part of town, I spent my first five years living in a true tough part of New York City. And this is Canada: People say 'sorry' if they bump into you."

Not that he's experienced any minor collisions of late. During the two-week quarantine period required of any American who wants to come to Canada, "you risk a six-month jail sentence and a $750,000 fine if you're caught leaving where you're staying. So needless to say, I haven't been out of this place since I got here."

Among his discoveries was a slab of moose meat in the Airbnb's freezer.

In the meantime, Dater has been writing up a storm — and he's looking forward to doing even more cyber-scribbling once he's given his walking papers. For one thing, he'll be able to attend the games, albeit under strange circumstances: "They're keeping everything really cordoned off because of the virus. We can only use one little elevator and one hallway, and I think we're going to be sitting on the upper first concourse, kind of where the handicapped section is in most arenas — which is a lot closer than the typical press box."

Before the puck drops, Dater will be able to capture the atmosphere in Edmonton for readers. "I think this is a great storytelling opportunity," he says. "Just because I'm not going to be in the locker room getting cliché quotes isn't a big deal for me. There's this thing called a phone where I can talk to players and get different stories. And I plan on being out and about on the streets, describing things, taking a lot of pictures."

But first, he's got to get out of his room.
KEEP WESTWORD FREE... Since we started Westword, it has been defined as the free, independent voice of Denver, and we'd like to keep it that way. With local media under siege, it's more important than ever for us to rally support behind funding our local journalism. You can help by participating in our "I Support" program, allowing us to keep offering readers access to our incisive coverage of local news, food and culture with no paywalls.
Make a one-time donation today for as little as $1.