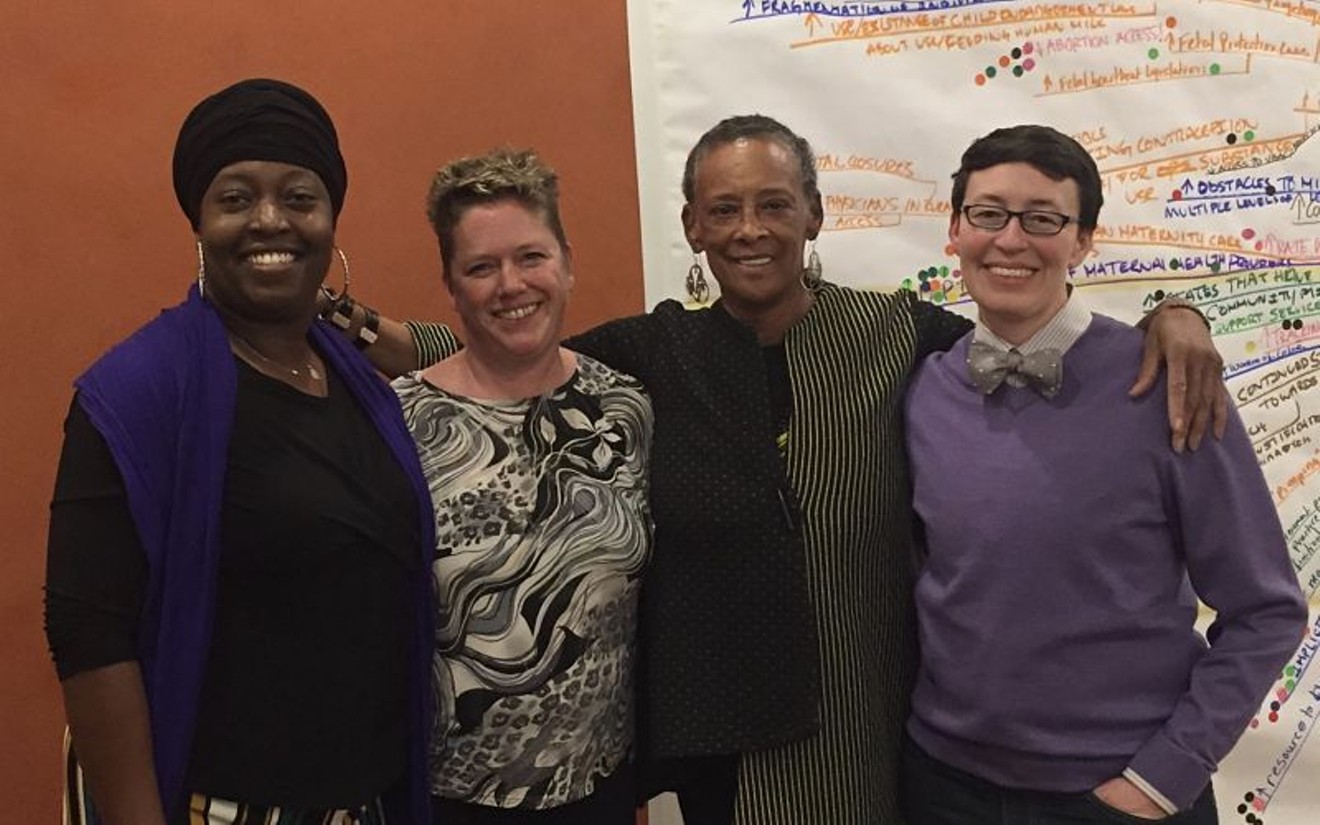 Demetra Seriki (from left), Heather Thompson, the late Claudia Booker and Indra Lusero. Courtesy of Kayla Q Frawley
After a long, altered and awkwardly placed legislative session, there is a lot of reason to celebrate the progress that took place at the Colorado Capitol. One of the historic wins is Colorado’s first-ever maternity-care bill package: the Birth Equity Bill Package, also referred to as Colorado’s Momnibus, after the federal package by that name. It is not just historic for its name and complexity (three bills that address some of the deepest inequities in the perinatal period), but also for all its various components.

Colorado joins other states like Illinois, New Jersey, Massachusetts, Washington and Virginia, as well as Washington, D.C., in initiating the expansion of Medicaid coverage in the postpartum period up to one year. In addition, these bills ensure that incarcerated people have a higher standard of access, care and supplies during the perinatal period, address insurance reimbursement inequities, modernize grievance processes so that people who are mistreated in pregnancy, labor, birth or postpartum can file with the Colorado Civil Rights Division, and ensure that facilities have policies that support a trial of labor after cesarean so as not to coerce families into having unnecessary cesareans. The organizers of these bills applied a human-rights framework to the perinatal period, and this is reflected in many provisions throughout the bills. This package is one of the boldest pieces of legislation in the country addressing the inequities that communities of color face in the perinatal period. Similar to the federal Momnibus, the birth-equity bill package aligns with national efforts to address maternal mortality and undo systemic racism.

Hundreds of leaders were behind this initiative; the endorsement list is impressive. Now meet the leaders who mobilized the community, ran the campaign, and pushed beyond opposition and apathy to make sure these bills had the chance to impact birthing Coloradans.

Senator Janet Buckner (she/her): As the champion of the Maternal Mortality Review Committee bill in 2019, Buckner is a proven leader in passing laws that address systemic inequities in a bipartisan manner. She represents House District 40, in southern Aurora. She was re-elected twice, in 2016 and 2018. The bills she has sponsored consistently address inequities, including the historic Equal Pay for Equal Work Act passed in 2019, ensuring that women are compensated equitably for their work. She is devoted to community-driven policy.

Representative Leslie Herod (she/her): Nationally known as a police-reform legislator, Herod passed the historic Police Enforcement Integrity Bill following the murder of George Floyd in 2020. Herod is a trailblazer in addressing intersectional issues at the State Capitol. Elected in 2016, she was the first Black LGBTQIA legislator in the General Assembly. Marshaling through many bills since she was elected — including criminal justice reform, mental health and substance use, youth homelessness, and civil rights protections — she is committed to addressing the cycles of poverty and the criminal justice system.

Indra Wood Lusero, Esq. (they/them): The founder of Elephant Circle, president of the Birth Rights Bar Association and former staff attorney for National Advocates for Pregnant Women, Lusero is one of the top birth-justice attorneys in the country and has created a model for community-based policy change for birth justice and birth equity. Lusero was the driving force behind Birth Rights, a resource for everyday people to defend human rights during labor and birth; led the most recent amicus brief effort in Rinat Dray’s forced cesarean case, and was a contributing author to this 2019 report to the U.N. on mistreatment during birth. Lusero is also a queer Latinx parent of two young adults whose family has been in this region for generations.

Heather Thompson, M.S., Ph.D., (she/her): An applied molecular biologist, Thompson has been a postpartum doula for eighteen years, served as research director for seven years at a community birth center in Colorado, and is a queer, non-binary parent to two children. Thompson has been committed to ensuring that all families have access to evidence-based, physiological birth in the birthplace of their choosing and is passionate about helping providers and new families navigate the liberalized landscape of perinatal cannabis. Born and raised in Colorado, Thompson is currently the deputy director of Elephant Circle and enjoys being able to advocate for pregnant, birthing and postpartum families.

Brenda Negrete (she/her): A first-generation Chicana from Los Angeles, California, Negrete earned her bachelor’s at Metropolitan State University of Denver in political science. While receiving her degree, she worked for the Journey Through Our Heritage program as a youth mentor, aiding in developing a curriculum that promoted ways that youth around Colorado could become active leaders in their communities. She is a Youth COLOR Policy Fellow.

Briana Simmons (she/her): A Black, queer femme from Kansas City, Missouri, Simmons is deeply inspired by the revolutionary act of mothering as an affirmation, concept and roadmap. As the Black Maternal Health, Healing & Joy Coordinator for Soul 2 Soul Sisters, she creates programming centering on the lives and experiences of Black women. Briana manages Soul 2 Soul Sisters’ doula program, Sacred Seeds Black Doula Collective of CO, in providing a healing space for professional development and networking opportunities for about twenty Black doulas as they work to serve pregnant people and their families throughout the state. She is a full-spectrum doula working with folks giving life and those facing death. At her doula organization, Unearthing Tradition, she offers holistic care, coaching and guidance where the goal is to celebrate a fulfilling and dignified experience with the healthiest outcome for families. She graduated from the University of Denver with a master's in international human rights in 2017.

Cynthia Brashears (Wake) (she/her): Brashears connected her extensive background in community organizing, leadership and legislative networking to support the Birth Equity Bill Package. She was just starting to launch the Birth Equity Advocacy Lobby group called BEAP that supported the Birth Equity Bill Package when she passed away in early May. She was a beloved mother and grandmother and spent decades fighting and organizing for her community. It is pertinent that we recognize her last efforts — striving to create a national example of birth equity for Coloradans.

Katherine Riley (she/ella): A queer Chicana with a passion for social justice, particularly around migration, gender and health, Riley has a dual master’s in social work and international development. Riley served as a high school social worker for pregnant and parenting teens, with the City of Denver’s Office of Immigrant and Refugee Affairs, and as a humanitarian researcher specializing in gender-based violence and mental health among refugees and immigrants. A social work lens, strong equity framework and lived experiences with abortion have emboldened Riley to work at the intersection of policy, community organizing and social justice. She is the policy manager with Colorado Organization for Latina Opportunity and Reproductive Rights (COLOR).

Kayla Q Frawley (she/her): A working single mom in Denver, Frawley is a former Certified Professional Midwife (CPM), midwifery educator, family advocate and now policy manager with Clayton Early Learning. She is a 2021 graduate of EMERGE Colorado and former community engagement chair with the Denver Women’s Commission, and she now manages the Parent Ambassador Program with Clayton — highlighting parent leadership and voice in state and federal policy. She is also a co-author of Diverse Colorado Voices: Community led-solutions in the perinatal period. She has worked with families from the prenatal to preschool age for twelve-plus years in various capacities, completed her BA in medical anthropology, and is a current master's in public health candidate with New Mexico State University.

Marpessa Allen (she/her): A Colorado native and mother of four, Allen is a doula and family advocacy consultant. She earned her bachelor’s from the University of Colorado Denver in communication studies. She was a political associate on the campaign for U.S. Senator John Hickenlooper. She served as the education committee co-chair for the Black Health Initiative with Children’s Hospital. She recently co-developed Mahogany Mother’s Circle, which is a virtual support group for Black mothers. She wrote and produced a documentary about her experience as a Black mother in Colorado titled 4EDOM. She combines policy, family advocacy and birth work to inform her leadership.

Vita Malama, MA (she/her): A certified birth doula and trained perinatal mental health specialist, Vita Malama completed graduate studies at the Chicago School of Professional Psychology focusing on performance psychology. She is on the executive team at Elephant Circle, where she lends her expertise in the area of data collection and research. She combines her passion for maternal health with psychology to provide a holistic approach to birth preparation and childbirth recovery.

Z Williams (they/them): A Denver-based community organizer and newly graduated lawyer with a lifelong dedication to social movements, Williams has mobilized grassroots efforts at the intersection of race, class and gender for twenty years. Williams was Elephant Circle’s organizer for the birth-equity bills. A non-binary parent of four children and an advocate for LGBTQIA+ people during the perinatal period, Williams provides coaching, systems navigation and support to families across the country. Williams's legal scholarship and professional interests focus on the rights of incarcerated people and defending social movements from state repression; Williams is currently serving as the Leonard Weinglass Fellow for the National Lawyers Guild Federal Repression Task Force.

Demetra Seriki is a practicing homebirth midwife in Colorado Springs, where she is the owner and founder of A Mother’s Choice Midwifery, providing an open-access clinic that is the only certified Perinatal Safe Spot in Colorado. Perinatal Safe Spots are the roots of the National Perinatal Task Force, modeling a vision and birthing a just and loving world through practice while successfully addressing inequities.

Westword frequently publishes commentary on matters of interest to the Denver community; the opinions expressed in them are those of the authors, not Westword. Have one you'd like to submit? Send it to [email protected], where you can also comment on this piece.
KEEP WESTWORD FREE... Since we started Westword, it has been defined as the free, independent voice of Denver, and we'd like to keep it that way. With local media under siege, it's more important than ever for us to rally support behind funding our local journalism. You can help by participating in our "I Support" program, allowing us to keep offering readers access to our incisive coverage of local news, food and culture with no paywalls.
Make a one-time donation today for as little as $1.