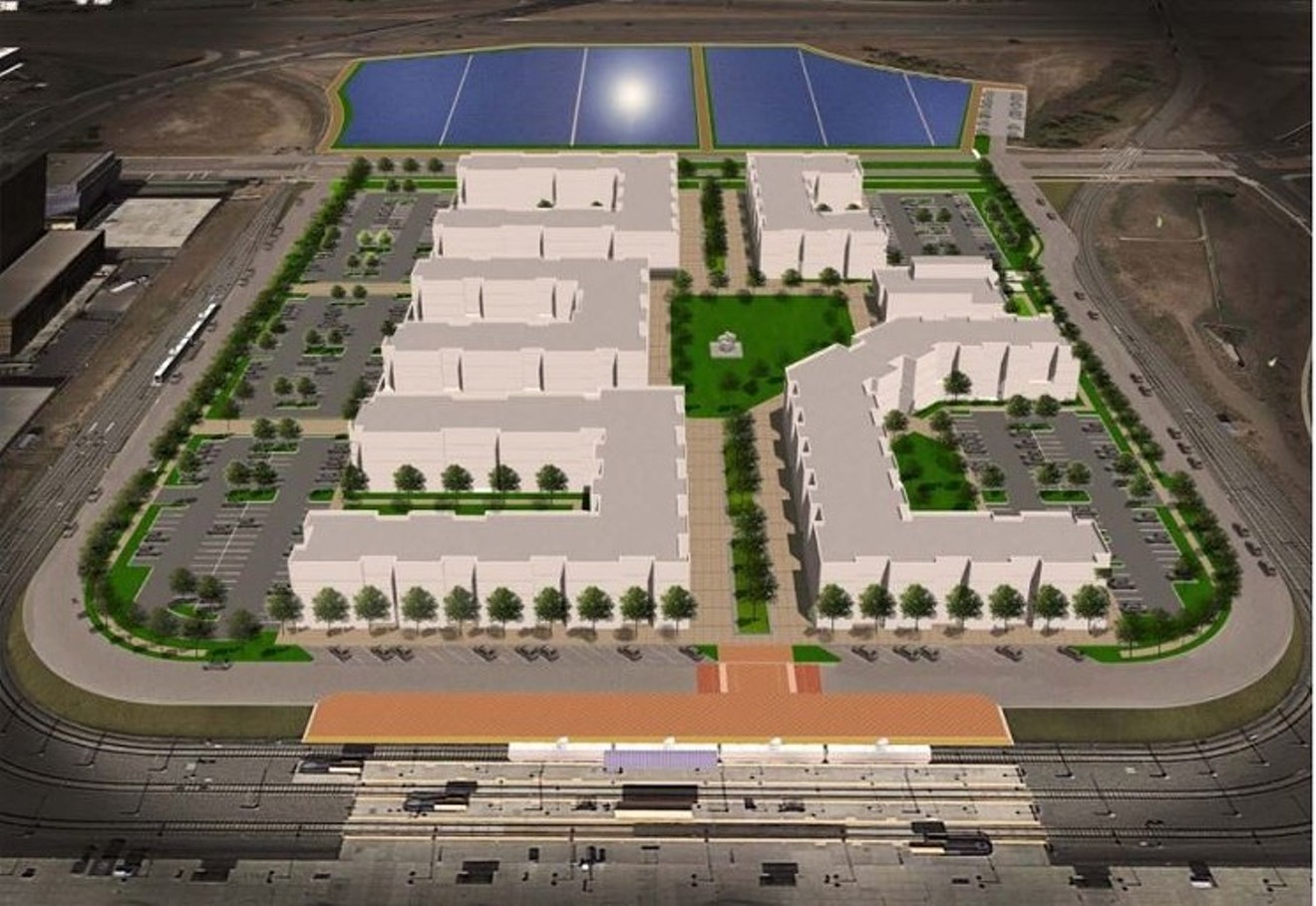 A rendering of the housing complex CCH is fighting for in Lakewood. Colorado Coalition for the Homeless
The Colorado Coalition for the Homeless is seeking a restraining order and preliminary injunction from the U.S. District Court of Colorado to prevent a federal agency from selling 59 acres of government land in Lakewood that had been awarded to the nonprofit to build permanent supportive housing for the homeless.

This latest court filing is related to a decision in March by the U.S. Department of Health and Human Services that a financing plan submitted by CCH was inadequate, effectively tabling a proposed development near the Denver Federal Center in Lakewood that would house as many as 1,000 formerly homeless individuals in apartment complexes.

The nonprofit asserts that its financing plan was reasonable and not given proper consideration. In its motion, CCH argues that “HHS appears to have played a game of ‘gotcha,’ basing its denial on a series of conclusions that were minor, immaterial, arbitrary, and capricious in an apparent attempt to thwart the Congressional intent of making surplus property available to assist the homeless.”

In an interview with Westword in March, CCH vice president of communications Cathy Alderman explained: “We thought we submitted a very sufficient plan, even though there are no guidelines, just that it be a reasonable financing plan. They disagreed. But they disagreed on points that could have been very easily remedied and didn't give us the opportunity to [address them] like they've done for other applications in the past. So we were surprised that their letter categorically denied our plan. We anticipated hearing from them about wanting more information and getting some clarification from us. Once we had the letter, we were shocked."

A map of the site.
Colorado Coalition for the Homeless
If approved by the court, the motion filed on Thursday, May 3, would make DHHS re-evaluate the financing application and would prohibit the federal agency that owns the sprawling piece of property, the General Services Administration, from selling it to a private interest in the meantime (which it seems keen on doing, having posted a “for sale” sign in March on the land).

The project has been extremely controversial. Lakewood Mayor Adam Paul lobbied against the development in Washington, D.C., and had boldly declared “Application DENIED” on Facebook when CCH’s financing plan was rejected. Many cranky Lakewood residents agree with Paul, arguing that the project will create an island of crime, destitution and substance abuse in the middle of Lakewood and will cause the value of surrounding property to drop.

The nonprofit’s attempt in Lakewood has been tumultuous — not just because of fierce community opposition, but because of the demurral of three different federal agencies. The Department of Housing and Urban Development had determined that the site wasn't suitable for homeless services because it used to include a landfill. Then the GSA started advertising the land for mixed-use development last year.

CCH was able to get a federal judge to stop the GSA from selling the land last August. Then, using the McKinney-Vento Homeless Assistance Act, CCH won a contract to develop the property to provide homeless services — and then it hit the barrier from DHHS.

“We believe it is our duty to hold these agencies accountable to the law and to do everything within our power to provide the critically needed supportive housing, health care, employment, and support services to the homeless individuals and families that have been left behind in Jefferson County and Lakewood," said John Parvensky, CEO and president of CCH, in a statement.