DREAMers play human chess at Congressman Coffman's Office. Brandon Marshall
Since the Trump administration appealed a district-court ruling this month to keep the DACA — or Deferred Action for Childhood Arrivals — program open, immigration activists have been protesting and pounding on doors to get Congress to pass protections for undocumented immigrants.

Activists in Denver and Washington, D.C., simultaneously approached congressional leaders on Thursday, January 18, and a protest was held at Benedict Fountain Park calling for action from Colorado politicians. The protesters seem to have spurred state legislative action, albeit action that is more symbolic than substantive.

This morning, January 19, the Colorado House passed a resolution called the DREAM Act, opposing any federal action that would revoke work authorizations or would deport the state's estimated 17,300 DACA recipients, also known as DREAMers. The resolution also urges Congress to "immediately find a collaborative and rational approach to passing a permanent legislative solution that allows Dreamers to secure legal status."

Colorado legislators estimate that the state would lose $856.9 million of annual Gross Domestic Product if DREAMers lost the right to work and study. The state's GDP was $322.6 billion in 2016.

"I wish an agreement had already come to fruition, and I wish that promises made would have been promises kept, but that's not the case," says House Speaker Crisanta Duran. "It is an emergency. It is a crisis, the fear that DREAMers have in this country right now about what the trajectory of their lives hold. ... Right now, today, there is an opportunity to show through our actions that we are not like Washington, D.C., that we will work together to do the right thing and support this resolution regardless of one's background."

The Colorado Immigrants Rights Coalition, which advocates on a range of immigration issues including DACA, hopes to use this resolution to amplify its message in D.C. The nonprofit currently has a five-member delegation of DREAMers at the Capitol working with lawmakers to push forward a legislative solution.

"Our coalition is in complete agreement with our Colorado legislators about the urgency to pass a permanent solution, which is why Speaker of the House Paul Ryan and Senate Majority Leader Mitch McConnell need to stop spinning and get on board to finally passing a bipartisan solution for Dreamers," said Nicole Melaku, the executive director of the Colorado Immigrants Rights Coalition, in a statement. "There are workable bipartisan solutions on the table, but opposition from Trump and Republican leaders has blocked their enactment. It’s time for them to realize that the American people don’t want a government shutdown, we want a policy breakthrough.”

While the resolution doesn't change the current turbulence of the DACA program — only federal lawmakers can do that — Colorado DREAMers and activists like Marissa Molina have felt reaffirmed in their fight to save families from the threat of deportation.

"We heard it today that a resolution like this is a waste of time because there isn't anything we in Colorado can do to fix immigration law. ... The message we send to our kids and communities about who stands up for them matters. Right now, those acts seem more symbolic, but there is so much weight in it when families and kids in our schools are afraid," says Marissa Molina, a DREAMer and public-school educator who was in attendance when the resolution passed. In 2015, she was honored by the White House as a Champion of Change. "Watching what happened on the floor really showed to me what courage and leadership looks like. It takes courage from our elected representatives and our communities and people who stand alongside us to say enough is enough; you don't get to play chess with kids."

Molina immigrated to the U.S. with her parents as a child and has called Colorado home for sixteen years. She graduated from high school in the top 10 percent of her class, was the president of multiple student clubs, and engaged in community service. She attended Fort Lewis College, but could barely afford the out-of-state tuition rates she was charged as an undocumented immigrant. And she couldn't qualify for any student loans, including from private lenders. (At the time, DACA didn't exist.)

For Molina, DACA is her only lifeline. Her parents and two siblings are naturalized U.S. citizens, but she is undocumented. DACA is the only way she can continue to work and have peace of mind that she won't be deported. While Molina's sister, who was the first to become a naturalized citizen, was able to petition the U.S. government to grant permanent residency to their parents and younger brother, Molina had "aged out." Because she's older than 21 and isn't considered a dependent, she could wait up to 25 years to gain permanent residency. Without DACA, those 25 years could mean a lifetime of fear of deportation and financial insecurity.

"That sheds a really important light," Molina says. "If it was as easy as filing a petition or I graduated college and I can prove that I can support myself, [but] things don't work that way. It's a lot more complicated and messy than what we hear and the soundbites we get." 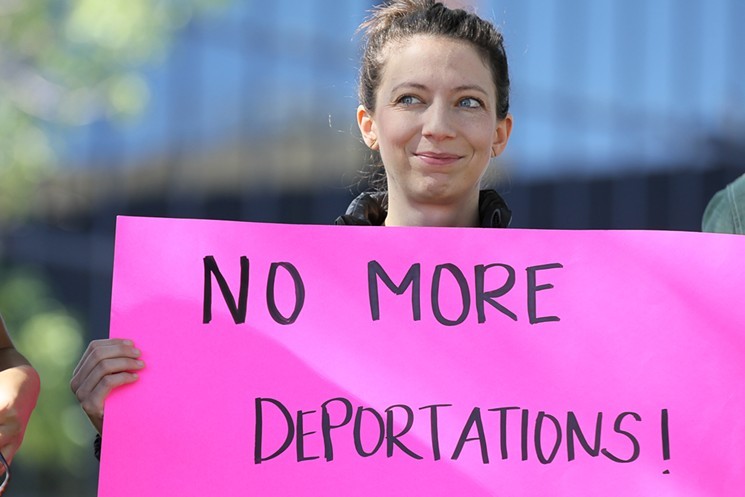 A demonstrator at a recent rally in Denver for undocumented immigrants.
Brandon Marshall
DACA is an Obama-era program that gave two-year renewable deferred action from deportation and work authorization to undocumented immigrants who came to this country as minors. Because the program was established via executive order, not federal legislation, the Trump administration was more easily able to target it for dismantling.

In September, Trump rescinded DACA and urged Congress to work out a deal. Although a California district judge blocked the White House with a temporary injunction, the Department of Justice has taken the rare step of appealing directly to the U.S. Supreme Court, bypassing the 9th Circuit Court of Appeals in an attempt to quickly wind down the program.

Congress has been split on how to move forward with legislative action to resurrect the DACA program. Colorado senators Cory Gardner and Michael Bennet were on board with a bipartisan bill that would reinstate protections for DREAMers as long as $2.7 billion was appropriated for Trump's border wall with Mexico (even though Trump has long promised the wall would be paid for by Mexico). Even with bipartisan support, a memo was leaked recently that showed that White House officials don't really want a deal and would rather tank DACA altogether.

As long as the temporary injunction is in place, DREAMers can continue to apply for work permits and deferred action from deportation renewals even if Congress doesn't meet its March 5 DACA deadline. New applications from undocumented immigrants who turned sixteen after the DACA rescission in September will not be accepted.

A temporary injunction would be lifted at the discretion of an appeals court while the case is ongoing.

"We don't know what decision they're going to make," says Cristian Solano-Córdova, communications manager for the Colorado Immigrants Rights Coalition. The nonprofit is urging DACA recipients whose status lapsed or will lapse this year to renew while they still have a chance.

"This window of renewal is very small, and we don't know how long it will last," Solano-Córdova says.