Pen pals in the Carta de Paz program. Courtesy of Angie Velez and Rachel Draeger
In May 2021, Angie Velez was stuck in an Immigration and Customs Enforcement detention facility in Louisiana.

In search of a better future, the 23-year-old Velez had spent three months traveling to the United States from Colombia; she'd waited for weeks in the Mexican border town of Acuña before crossing the Rio Grande and eventually getting detained by Customs and Border Protection. While in federal detention, Velez applied for asylum and was transferred to ICE custody.

After she'd spent a few days in Texas, the feds sent Velez to Richwood Correctional Center in Monroe, Louisiana, where she was housed with Venezuelans, Cubans and other people from around the globe.

There wasn't a lot to do in detention. One of Velez's podmates who'd been receiving letters from a pen pal on the outside suggested that Velez write to the pen pal program.

"A few days later, I received a letter from Rachel. I was really excited. Rachel sent me a photo, and we were just starting to get to know each other," Velez says, speaking through a translator during a video call over WhatsApp.

The author of the letter was Rachel Draeger, a Denver-based social worker who speaks Spanish and used to live in Colombia.

Draeger had been volunteering for years with Casa de Paz, an immigrant support organization in Colorado. In 2018 and 2019, Draeger would go once or twice a month to the Aurora Contract Detention Facility to spend time with ICE detainees. "I visited with someone who was from Mexico, and getting to talk with him was such a life-giving conversation," Draeger recalls.

Draeger was working with Greg Mortimer, who had recently founded the Colorado Immigrant Justice Fund, which helps pay for legal representation for detained immigrants. "Up until COVID, we were at the point where we had about thirty volunteers a week going," says Draeger. "When the pandemic hit, we transitioned to assigning the names of the people we had been visiting to a volunteer to write letters to let them know we were still thinking of them even though we couldn’t visit them."

Casa de Paz created a pen pal program named Cartas de Paz, or Letters of Peace. And its founders soon realized that they could send letters to immigrants detained across the country, not just those in Aurora.

"What has been nice about it is suddenly with a pen pal program, geography doesn't matter anymore," Mortimer says. "Now, gradually over time, we have pen-pal volunteers in just over thirty states."

"We started assigning volunteers to write letters to any immigrant who was detained who wanted to start writing letters," Draeger says. 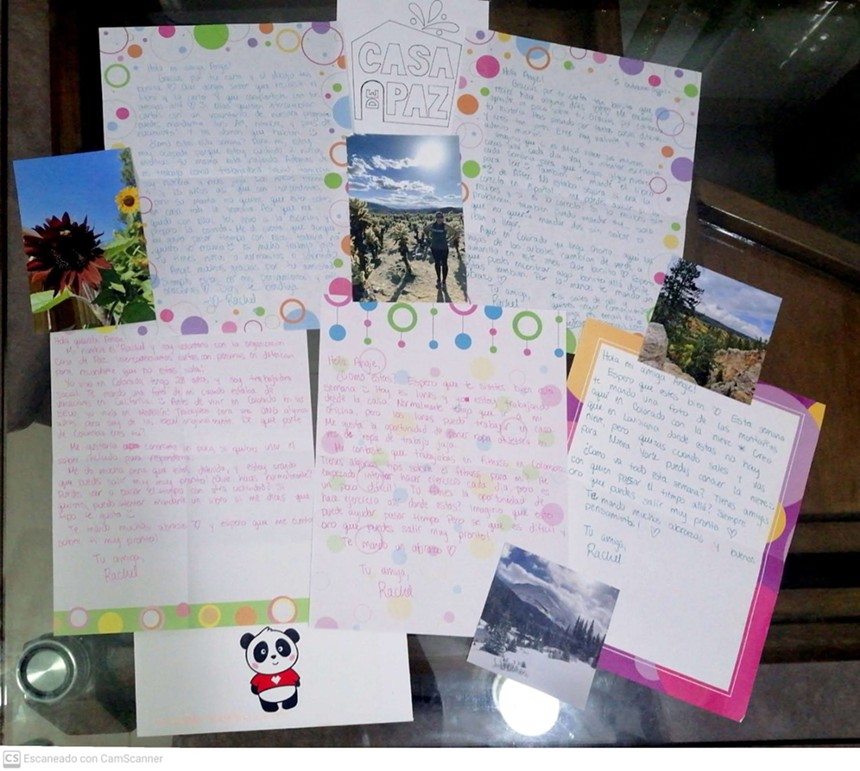 Angie Velez has kept all the letters she received from Rachel Draeger.
Courtesy of Angie Velez
By now, over 500 volunteers have written to more than 900 immigrants in 39 detention centers in 15 states across the U.S., according to Mortimer.

The pen pal relationship she established with Velez has been "extremely rewarding," Draeger says. "Angie was so excited when she wrote back. She drew me a whole picture and told me about her life. She just had such good energy." Draeger is on the WhatsApp video call, and it's the first time she's seen Velez's face live.

The pen pal exchange helped Velez pass an uncertain time while she awaited a resolution to her asylum case.

"I'm very grateful for Rachel, because she completely changed my routine while I was in there. Other girls got mail, too, but it was mostly sad things or things from court. For me, it was a little bit different. I was always excited to get mail. When the guards were saying, 'Colombia, Colombia,' I was really excited to get letters from Rachel," Velez recalls.

Velez's asylum application was ultimately denied and she was deported to Colombia, arriving back in her home country in November 2021.

"I feel very calm even though I know I'm at risk," she says. "I’m calm right now because I know that I'm with my family. Being away made me know everything that I have." She's currently living in the city of Pereira and studying visual arts at a university.

Although Draeger feels fortunate to have gotten to know Velez, she's disappointed with how Velez's journey ended. "This country, that so many people think of as the land of opportunity, treated her unfairly," she says. "Anyone who would spend time with her would say she’s the best and brightest of Colombia."

Over two years into the pandemic, ICE recently announced that it's again starting to allow visitation at facilities across the country. But that won't end the pen pal program, notes Mortimer.

"At whatever point we can resume in-person visits," he says, "our volunteers have told us they would also like us to continue the pen pal program."
KEEP WESTWORD FREE... Since we started Westword, it has been defined as the free, independent voice of Denver, and we'd like to keep it that way. With local media under siege, it's more important than ever for us to rally support behind funding our local journalism. You can help by participating in our "I Support" program, allowing us to keep offering readers access to our incisive coverage of local news, food and culture with no paywalls.
Make a one-time donation today for as little as $1.