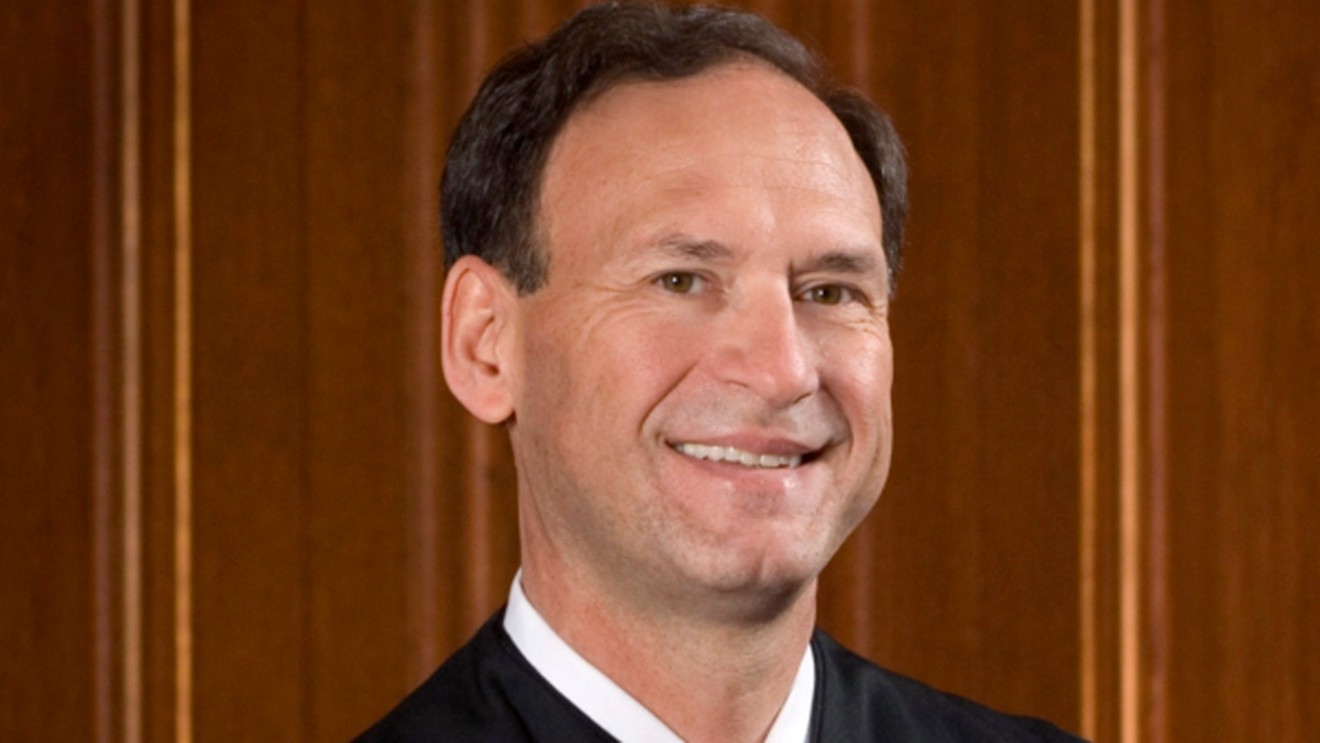 Justice Samuel Alito wrote the draft majority opinion. supremecourt.gov
A U.S. Supreme Court draft opinion showing that a majority of the justices had voted to overrule 1973's Roe v. Wade, the landmark decision that guaranteed the right to abortion in the United States, was made public by Politico late on May 2. The responses among a slew of progressive officials and organizations in Colorado, the first state to legalize abortion way back in 1967, were swift, passionate and condemnatory.

These reactions suggest that just as Colorado Republicans are positioning themselves to use the fentanyl crisis as their defining campaign issue in the November 2022 mid-term election, Democrats are ready to paint their opponents as pushing for the end of a right that's been guaranteed for nearly fifty years and is broadly popular, as evidenced by a January CNN poll showing that 69 percent of respondents opposed overturning it.

The draft, penned by Justice Samuel Alito, appointed by President George W. Bush in 2006, certainly can't be characterized as a half-measure. One excerpt reads: "Roe was egregiously wrong from the start. Its reasoning was exceptionally weak, and the decision has had damaging consequences. And far from bringing about a national settlement of the abortion issue, Roe and Casey have enflamed debate and deepened division."

If the court's final opinion on a case out of Mississippi remains essentially unchanged by the time of its expected release in late June or early July, each state would be able to determine whether to allow abortions, and Colorado has already made that choice legislatively. Last month, Governor Jared Polis signed HB22-1279, the Reproductive Health Equity Act, whose summary declares that "every individual has a fundamental right to use or refuse contraception; every pregnant individual has a fundamental right to continue the pregnancy and give birth or to have an abortion; and a fertilized egg, embryo, or fetus does not have independent or derivative rights under the laws of the state."

As a result, the immediate impact of Roe's end could be Colorado becoming a major destination in what has been dubbed the underground railroad to reproductive freedom — women from surrounding states that have prohibited abortion traveling here to have the procedure either on their own if they have the means, or with the assistance of charitable organizations if they don't. But since laws can change with shifting political tides, abortion-rights advocates are calling for similar language to be enshrined in the Colorado Constitution, from which it would be much more difficult to delete.

"This is exactly what we feared and why it was so important for Colorado to protect the fundamental right to abortion in Colorado law with the Reproductive Health Equity Act," Middleton maintains. "We have warned legislators and the public alike that the Supreme Court was poised to overturn Roe v. Wade, and this further confirms it. Regardless of what the Supreme Court ultimately decides with a final decision, because of RHEA, Coloradans have the right to abortion access affirmed in our state law. This makes the urgent need to put the right to abortion in our Constitution in 2024 even more of a priority, and to hold accountable those who didn’t support abortion access with RHEA in 2022."

Adds Gurule: "With this potential decision, this court is yet again showing it has no problem harming pregnant people across the country, particularly Black, Indigenous and other people of color, people with disabilities, people in rural areas, young people, undocumented people and those having difficulty making ends meet. At the core of our movement for Reproductive Justice is community power. And our historic victory to protect our right to abortion — in the face of a hostile Supreme Court — is just the beginning. This is why it was so important for Colorado to protect the fundamental right to abortion into law with the Reproductive Health Equity Act. While Coloradans’ rights are now protected, we won’t stop until every state follows our footsteps in codifying abortion access and reproductive rights into law."

Others weighing in on the draft include Polis ("While this is extremely disappointing news, representing a radical shift in American life away from individual freedom, in Colorado we will continue to fight for and respect the right to make decisions about your own body and medical health"); U.S. Senator Michael Bennet ("Assuming the Court issues an official decision consistent with this draft, the American people will have to fight to enshrine this fundamental right in our national and state laws"); U.S. representatives Diana DeGette and Barbara Lee on behalf of the Congressional Pro-Choice Caucus ("Everyone should have the right to make their own personal health care decisions that impact their lives, health and futures, and it is chilling to think this court is unwilling to protect those rights"); and Colorado Democratic Chair Morgan Carroll ("We will not allow this extremist court to take us backward").

Numerous prominent Colorado politicians have yet to weigh in: Representative Ken Buck has not responded, and neither have Republicans Ron Hanks and Joe O'Dea, who are challenging Bennet. The same is true of Dave Williams, running against GOP incumbent Doug Lamborn, even though he sponsored HB22-1079, "Abolishing Abortion in Colorado," a symbolic bill that went nowhere during the current legislative session.

In contrast, Lamborn offered this: "If the reporting by @politico is accurate, this ruling would be the most consequential pro-life decision in decades. I hope and pray this is true." And moments ago, U.S. Representative Lauren Boebert, who seemingly tweets about everything, opined: "If your response to the SCOTUS news is to dust off your stupid pink hat from 2016 and go march to support infanticide, re-evaluate your entire life."

Click to read the draft opinion about overturning Roe v. Wade.
KEEP WESTWORD FREE... Since we started Westword, it has been defined as the free, independent voice of Denver, and we'd like to keep it that way. With local media under siege, it's more important than ever for us to rally support behind funding our local journalism. You can help by participating in our "I Support" program, allowing us to keep offering readers access to our incisive coverage of local news, food and culture with no paywalls.
Make a one-time donation today for as little as $1.