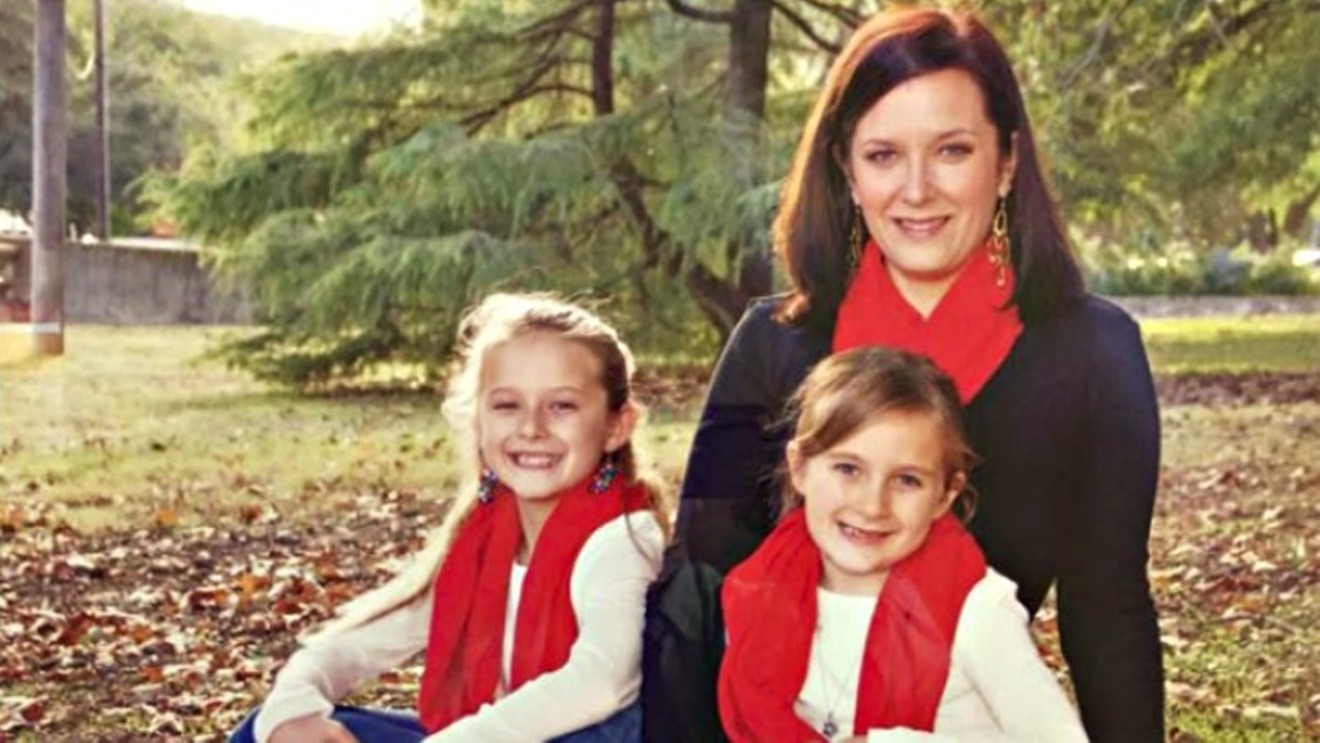 Kelly Huber was killed in the fall from the Quick Draw Express lift at the Granby ski resort, and her two daughters, Ashley and Taylor, were injured. Courtesy of Leventhal Puga Braley P.C.
On December 29, 2016, San Antonio mom Kelly Huber was killed and her two daughters, Ashley and Taylor, seriously injured after a fall from a chairlift at the Ski Granby Ranch resort. A subsequent probe by the Colorado Tramway Passenger Safety Board determined that Huber's death, one of fourteen at a Colorado ski resort during the 2016-17 season, was caused by what was deemed an "unprecedented" mechanical error involving the lift's electronic drive.

Now, more than five years later, a wrongful-death lawsuit pressed by Denver-based Leventhal Puga Braley P.C. on behalf of William Huber, Kelly's husband, has been settled prior to a trial scheduled for March 2023 in Grand County District Court. "They are pleased with the settlement, hope no other family has to go through what they went through, and are looking forward to moving on with their lives," says attorney Bruce Braley, speaking for the family. The details of the settlement haven't been released.

The lift at the heart of the case was the Quick Draw Express, and its drive had been installed just weeks before it malfunctioned. By the time the suit was filed in December 2017, Ski Granby Ranch had replaced the drive and noted that the lift had been inspected and licensed.

After the accident, the Colorado Tramway Passenger Safety Board's investigative team determined that Huber, forty, and her daughters — Ashley was twelve and Taylor was nine at the time — were in chair number 58 on the lift when it "struck support tower number five and the occupants were ejected or fell from that chair...approximately twenty-five feet onto hard-packed snow."

The board's report about the incident, which filled 151 pages, traced the accident to the lift's electronic drive and added worrisome analysis. Its authors noted that "electronic drives are not manufactured specific to ropeways. In fact, the same drive may be used in hundreds of other industries, from paper mills and food processing to gravel quarries. In addition, each lift is a one-of-a-kind, unique in its design, vertical profile, length, tower spacing, tower sheaves, carrier spacing and type of carrier-detachable or fixed grip. As a result, there are no 'standard' settings for the drive, but rather a recommended range of settings for the drive to power a lift. The purpose of 'tuning,' or 'fine-tuning,' a drive during installation is to find the right combination of drive parameter settings to optimize the lift performance under operational conditions. It appears the new drive was not comprehensively tuned to this particular lift during installation." 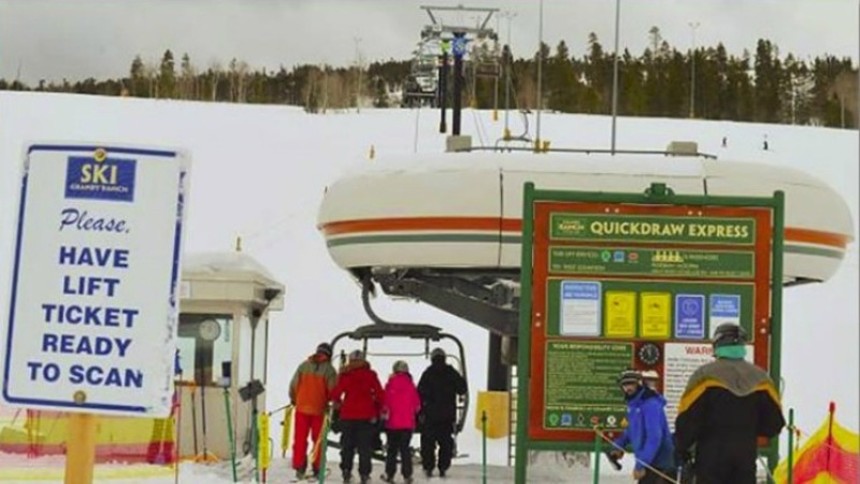 The Quick Draw Express lift.
Courtesy of Leventhal Puga Braley P.C.
The report added: "It is the conclusion of the investigation team that the selected tuning of the drive combined with the natural harmonics of the lift system, along with rapid speed changes, caused the rope instability resulting in Carrier 58 contacting Tower 5. The selected tuning of the drive resulted in oscillations of the drive bullwheel torque. The rapid periodic changing of the applied torque caused rope instability (surging) that was amplified by the natural lift dynamics. This rope surging is greatest near the bottom terminal where the tension is lowest. In this case, the maximum instability (rapid speed change) appears to have occurred as the lightly loaded Carrier 58 approached Tower 5. Witness statements confirmed that the carrier was swinging as it approached the tower. The combination of rapidly changing rope speed amplified the lateral swing to the point that the carrier struck Tower 5."

The lawsuit includes technical language as well. But its more affecting sections look at the incident from a human perspective — and suggest that warning signs about problems with the lift were ignored.

One passage notes that two engineers, Marco and Jennifer Aieta, who owned a home at Granby Ranch, "were skiing at Ski Granby Ranch a week before December 29, 2016, and raised concerns with representatives of the Defendant about problems with the Quick Draw Express chair lift. More specifically, they described an 'intense, high amplitude swinging and bounce [that] was way out of the ordinary and appeared to be a change in operational procedure to speed skier transport.' This swinging and related vertical bounce were so significant that it was necessary to 'hold onto something' to stay on the chair.'"

Similar observations were made by Soonie Suh, who had taken her kids to ski at the resort on December 23 and 24. She said the Quick Draw Express lift "stopped and swayed often" and the swaying "would sometimes take her breath away." The lawsuit maintains that Suh's son complained about the lift to a resort employee wearing a "managing director" name tag. The staffer is said to have "assured them the lift was fine."

But that wasn't the case — and the lawsuit shares the observations of two witnesses to the fall.

Jordan Schwartz, a member of the resort's ski patrol, was sitting in chair 57, directly in front of the Hubers. "As he ascended ahead of the Huber family, Schwartz noticed a quick stop and start, and then his chair experienced a big vertical sway and bouncing," the document notes. "Schwartz noticed an increase in vertical movement, heard a 'thunk,' and felt a rattle/vibration through the wire rope line that carried the chairs. He turned around and saw three people falling from Chair No. 58 as it swung horizontally. Schwartz saw Kelly Huber holding Ashley Huber in an attempt to protect her young daughter from the impact with the ground. Schwartz could only see one of the children moving after the fall."

Zach Pappas, sitting in chair 59, behind the Hubers, had a different angle on the accident — and was nearly tossed out of his seat, too. The suit says that Pappas "described Chair No. 59 as swaying back and forth so violently that 'we almost came off the track.' Pappas said Chair No. 59 'came within inches' of striking the tower. Pappas said the pulse that impacted his chair transferred to Chair No. 58, which was 'swaying incredibly hard' and hit the tower. Pappas saw Kelly, Ashley and Taylor Huber 'hit directly on their heads' when they hit the ground."

According to the complaint, Pappas "told authorities that he had been skiing at Ski Granby Ranch the past few weeks and 'had experienced very aggressive stopping of the lift and swinging back and forward while riding that lift [Quick Draw Express].'"

According to the suit, Kelly went into cardiac arrest after she hit the ground. She failed to respond to medical treatment and was pronounced dead at 10:46 a.m. on December 29, less than an hour after paramedics arrived on the scene.

Taylor was immobilized on a back board and her right leg was splinted. During the medical assessment, she was noted to have "shallow breathing and pain inhaling; inability to recall the event that caused her injuries; an abrasion on her mid forehead; midline neck pain, which resulted in the placement of a cervical collar throughout her stay; midsternal pain in her chest; and a displaced fracture of her right mid tibia and fibula; right leg pain; back pain and chest pain." She was subsequently diagnosed with fractured left and right first ribs, a lung contusion or laceration, a pneumothorax, lacerations to her kidney and spleen and displaced fractures of her tibia and fibula.

Ashley was diagnosed with "a comminuted fracture of her left tibia with extension to her growth plate," as well as "a fractured left tibia" and "a severe facial injury as a result of her fall."

The girls eventually recovered from their physical injuries, but according to the suit, they "suffered post-traumatic stress and emotional trauma from experiencing the fall and their mother’s tragic injuries and eventual death." Both required counseling "due to their emotional distress and pain."

Ski Granby Ranch hasn't responded to a request for comment about the settlement. Click to read William Huber v. Granby Ranch Holdings, LLC and the Colorado Tramway Passenger Safety Board accident report.
KEEP WESTWORD FREE... Since we started Westword, it has been defined as the free, independent voice of Denver, and we'd like to keep it that way. With local media under siege, it's more important than ever for us to rally support behind funding our local journalism. You can help by participating in our "I Support" program, allowing us to keep offering readers access to our incisive coverage of local news, food and culture with no paywalls.
Make a one-time donation today for as little as $1.