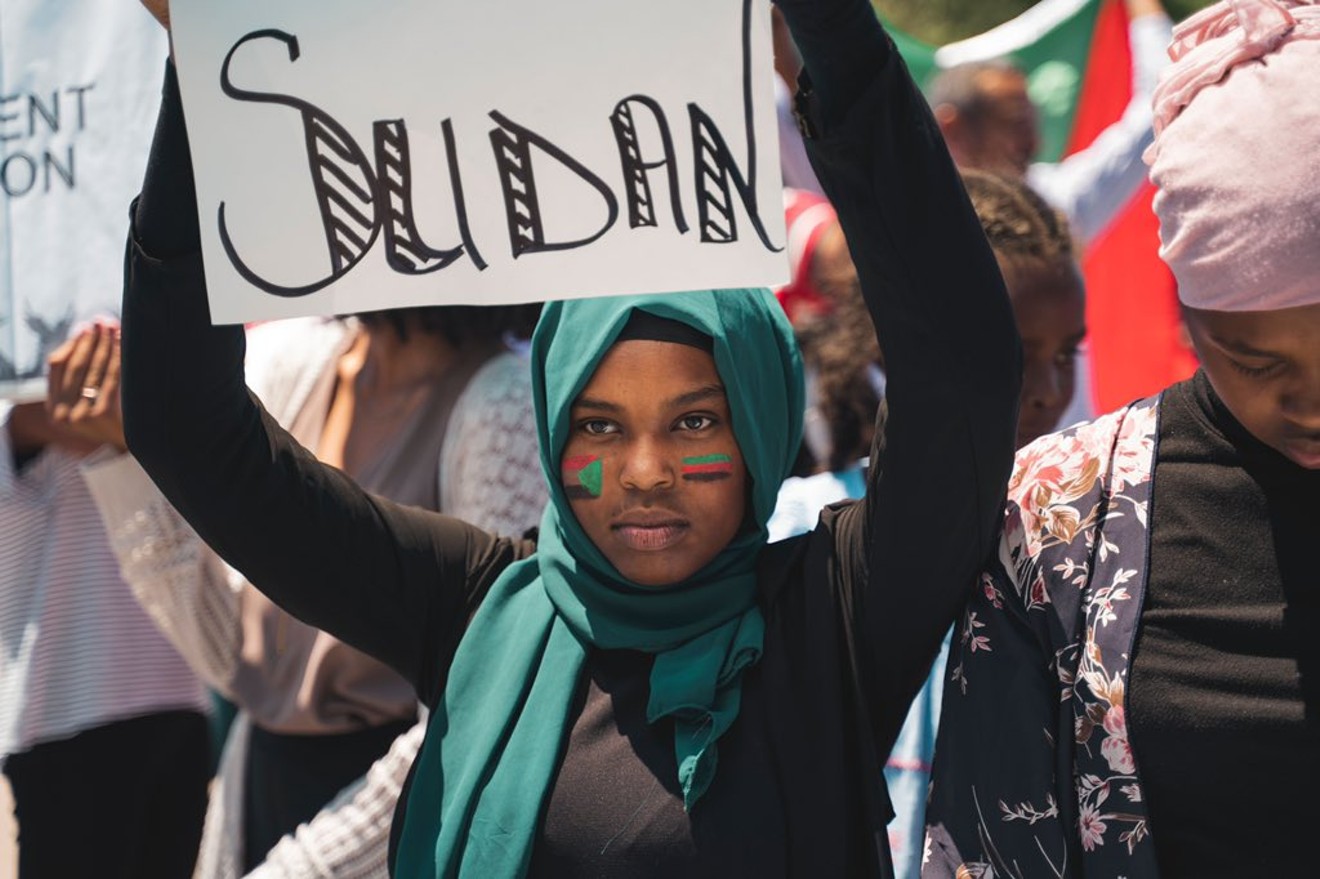 A protester at the June 8 demonstration in Civic Center Park. Courtesy of Wafa Saeed
Colorado's Sudanese community might be thousands of miles from Sudan, but they want to help their countrymen any way they can.

"This is really a humanitarian crisis. We need as much support as possible," says Wafa Saeed, executive director of the Sudanese American Public Affairs Association, which is based in Aurora.

Saeed is part of a group of activists in Colorado who are pushing for the state's elected officials to take action to end the violence currently gripping Sudan. In particular, they want politicians to condemn the violence and its perpetrators, support an international investigation into what's happened so far, and demand a transfer of power to a civilian-led government.

Since December, the East African nation has seen waves of protests aimed at overthrowing its dictatorial regime. The protests were successful in dislodging longtime dictator Omar al-Bashir, but have not managed to remove the military from government leadership. And earlier this month, soldiers and militia members shot protesters in Khartoum, the country's capital, killing over 100.

On June 8, metro Denver's Sudanese community gathered for a rally in Civic Center Park to raise awareness of the situation in Sudan. On June 30, Sudanese activists will hold a candlelight vigil on the steps of the State Capitol; Saeed says the action will be part of a nationwide demonstration in solidarity with the protesters in Sudan.

Congressman Jason Crow, whose district includes Aurora, home to many Sudanese, has already weighed in, tweeting on June 14: "In Sudan, peaceful protestors are being killed simply for calling for free & fair elections. We cannot allow these human rights abuses. I stand with the people of Sudan who are fighting for their freedoms and call on the Sudanese military to stop the violence immediately."

Congresswoman Diana DeGette, who represents Denver, has also expressed solidarity: “What’s happening in Sudan shouldn’t be allowed to happen anywhere in this world. We must not turn a blind eye to the violence and bloodshed that’s ongoing there. The U.S. needs to be doing everything it can to help support the Sudanese people and bring an end to the violence.”

Voices from outside Sudan pushing back against violence are particularly important now, activists say, because of what's been happening inside the country. The government has instituted an Internet blackout, limiting the ability for activists to publicize what's happening. Saeed hasn't been able to contact family members in Sudan for weeks, she says.

Colorado is home to a large Sudanese diaspora community; many have relocated to Denver and Aurora, but there are also large communities in Fort Collins, Boulder and Colorado Springs. Between 1980 and 2017, Colorado welcomed over a thousand refugees from Sudan; other Sudanese have come here as immigrants searching for better economic opportunities.
KEEP WESTWORD FREE... Since we started Westword, it has been defined as the free, independent voice of Denver, and we'd like to keep it that way. With local media under siege, it's more important than ever for us to rally support behind funding our local journalism. You can help by participating in our "I Support" program, allowing us to keep offering readers access to our incisive coverage of local news, food and culture with no paywalls.
Make a one-time donation today for as little as $1.