Claire Chastain celebrates the game-winning goal in the national championship game. Rodney Chen
Claire Chastain moved to Denver in 2013, after graduating from college in North Carolina; she wanted to help build one of the top women's ultimate Frisbee club teams in the state, Molly Brown, into a national champion. Nearly ten years later, her work paid off: The team took home its first USA Ultimate National Championship last month.

Ultimate Frisbee calls for two seven-player teams that each try to score by tossing a disc into the opponent's end zone. USA Ultimate oversees competition at the club level, much as USA Tennis or USA Volleyball do for those sports, and has hosted championships since its founding in 1979. Along with two teams playing in the mixed, coed division, Molly Brown and Johnny Bravo represented the state in the most recent nationals.

Molly Brown, which has players across metro Denver, up to Fort Collins and down to Colorado Springs, was established in 2010; Chastain says that the team’s goofy, fun culture was what attracted her to join  — though she'd hoped for a national championship a little sooner.

Over the last few years, there's been significant movement toward creating equality among the men’s and women’s club ultimate divisions, Chastain says, but the Molly Brown roster shrank to fewer than 21 players during the pandemic. Chastain coaches at the University of Colorado, and she recruited some of her best athletes for the team. Even so, recovery for the women's side of the sport lagged behind the men's, whose club calendar started in June. The women's didn't begin until late August.

That slow start impacted Molly Brown, Chastain notes; the team “got crushed” at a tournament in the Bay Area before reshaping its schemes and winning a tournament in North Carolina six weeks before the national championship.

The athletes worked with a sports psychologist to make sure they were mentally ready for the championship. In pool play, which determines teams' paths in the tournament, Molly Brown was slated to play the Boston Brute Squad, a team that had knocked it out of the semi-finals for four straight years, from 2015 to 2018; the Colorado team's loss to the Boston team also eliminated it from the national championship 2021. 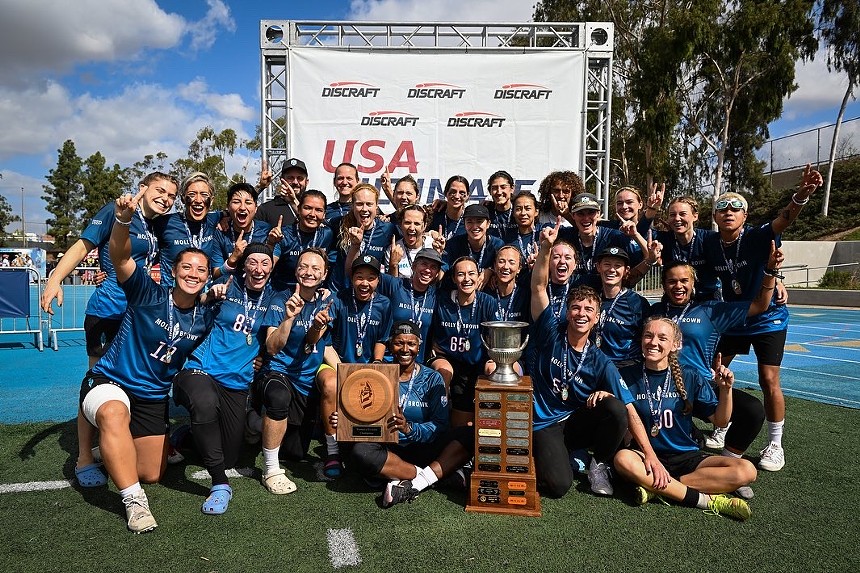 Molly Brown took home the USA Ultimate National Championship trophy.
Ultiphotos, Kevin LeClaire
When Molly Brown beat Boston by a single point this year, though, it marked the beginning of the road to victory. In the finals, the team matched up against the San Francisco Fury, which won seven national championships in a row from 2007 to 2012 and had been undefeated since 2019. San Francisco made a few mistakes early, however, and Molly Brown capitalized on them, gaining momentum.

And the Colorado team also had a secret weapon. “We have these two players from Colombia, the Cardenas sisters, and they just are extremely hard to stop,” Chastain says. “They play a totally different style than American ultimate. It's really quick, really fast-paced.”

Valeria Cardenas is probably the best player in the world right now, she says. Along with the Cardenas sisters, Chastain also highlights Lisa Pitcaithley, Saioa Lostra and Kristen Reed for working together to form a cohesive offensive unit that led to the team’s success.

“It's been a really long time coming for this team,” Chastain says. “We've had a lot of talent for a long time. … We've had our eye on wanting to win a title and have, obviously, fallen short so many times, and that feeling of disappointment is just kind of always in the back of your mind. To get past that…it's totally indescribable.”

Particularly since the players all have other jobs and commitments: they aren’t professional athletes. But that could change.

In March 2023, the Colorado Alpenglow, a women’s professional ultimate team, will begin its first season in the Western Ultimate League, the eighth team in the league.

Alyse Doperalski, Betsy Basch, Jess Larson and Tina Mcdowell are the founders of the Alpenglow. Doperalski is a Colorado native and engineer at Lockheed Martin. She’s played ultimate since college; after tearing her ACL twice in high school playing soccer, she needed to find a new sport.

Doperalski usually plays in the mixed division for club competition, so she hasn’t been a member of Molly Brown, but she was a member of the Arizona Sidewinders, a WUL team, last season.

“I absolutely loved being a part of that team and that community,” she says. When the Colorado Summit became the first men’s professional ultimate team in the state by joining the American Ultimate Disc League, Doperalski and other members of the local ultimate community wondered why there wasn’t a women’s team, too. So once she finished her season with the Sidewinders, she worked with others to make the Alpenglow a reality.

Though the announcement of the team on October 26 came at a great time considering the Colorado teams’ national championships, Doperalski says that wasn’t intentional. Rather, it was based on the WUL timeline for when the Alpenglow needs to host tryouts to fill its roster before the season starts in March. Still, the pro team's founders are thrilled that Molly Brown won, and say they hope its players will try out for the team.

“We're all really excited for Molly,” Doperalski says. “It's a really great, really awesome thing for them.”

Gender parity has been an issue throughout ultimate history. In fact, over 150 people signed a 2017 letter calling for a boycott of the league until it provided equal resources for women. While the AUDL allows women to try out, most teams are primarily made up of men. And while the AUDL covers expenses for players, the pro women's league, the WUL, often does not.

Some athletes, including Chastain, have concerns about professional ultimate in general. She says the Colorado ultimate landscape lags behind other big hubs for the sport in terms of youth participation schools that offer ultimate tending to be in whiter, more affluent areas.

She’d rather see the resources it takes to run a professional ultimate team dedicated to growing the youth level more equitably by paying coaches and providing avenues for young athletes with less money to get in the game.

According to Doperalski, the new team's leadership is aware of those concerns and plans to invest in the youth level as Alpenglow grows, including paying some youth coaches and donating cleats and other equipment to youth teams. “It's really important to us for this team to be really a community-based team,” she adds. Johnny Bravo became a national champion again in October.
Joe Durst
On the men’s side, Johnny Bravo coach Joe Durst says the team shared fifteen rostered players with the Summit and four or five practice players. A few of the Johnny Bravo team members opted not to play on the Summit, agreeing that professional ultimate isn’t a good use of resources, but in general, Durst says, the club wanted to work with the Summit to get the best result for both teams.

It seemed to work, with Johnny Bravo, which was founded in 1996, taking home the national championship for the first time since 2014 and the Summit winning the western division in the AUDL.

Durst coached Molly Brown for four years before becoming a coach for Johnny Bravo, and seeing both teams win was special, he says: “It makes it all the sweeter when we see our friends and our teammates doing well together."

“It's really special to be able to share this with Bravo,” Chastain adds.“Many of those guys have been working just as long as we have to get here, and to be able to celebrate with each other and bring the trophy back to Colorado is amazing."
KEEP WESTWORD FREE... Since we started Westword, it has been defined as the free, independent voice of Denver, and we'd like to keep it that way. With local media under siege, it's more important than ever for us to rally support behind funding our local journalism. You can help by participating in our "I Support" program, allowing us to keep offering readers access to our incisive coverage of local news, food and culture with no paywalls.
Make a one-time donation today for as little as $1.