Colorado Has One of USA's Worst Drug Problems, Study Says 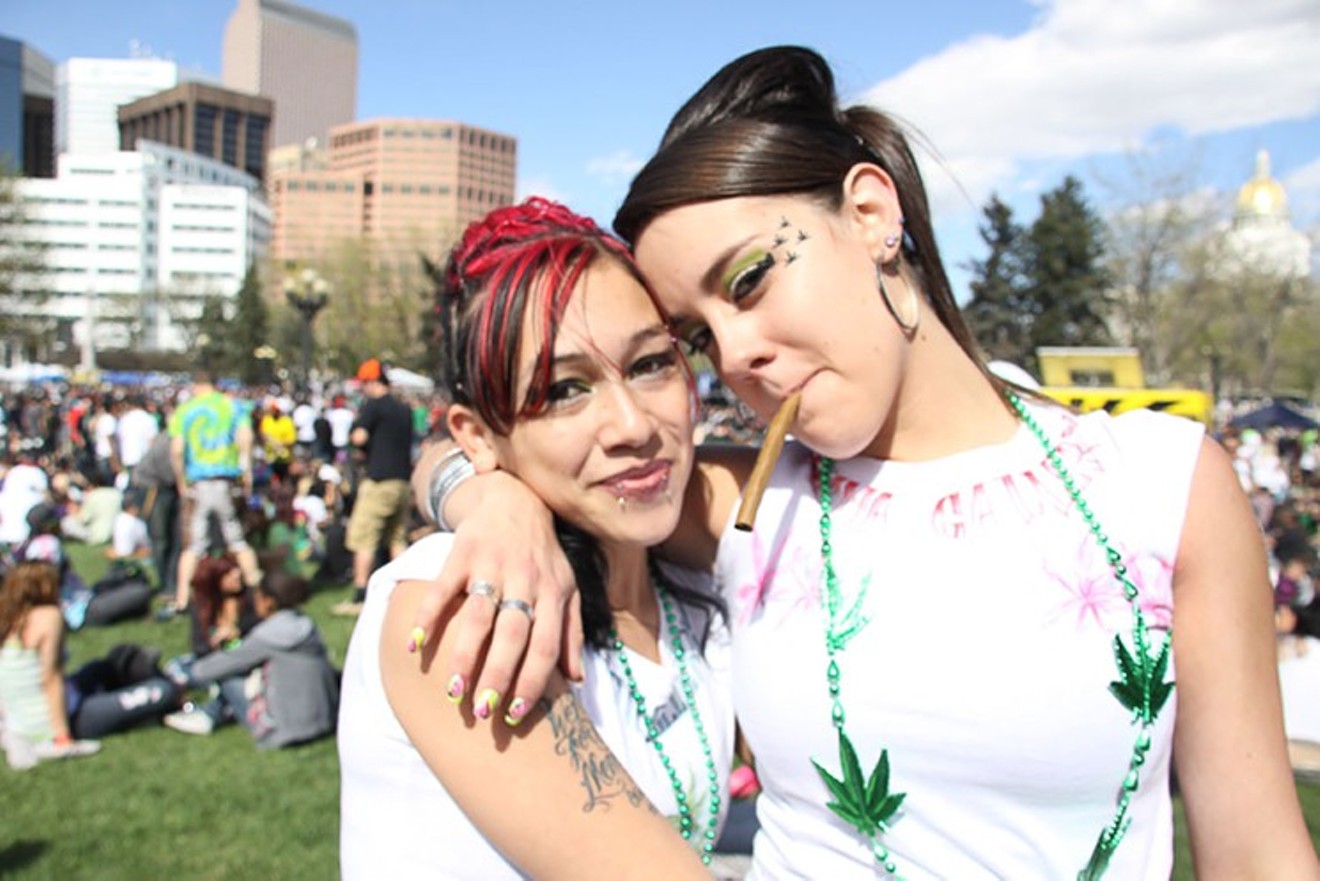 A photo from the 4/20 celebration at Civic Center Park in 2013. Click to view the complete slideshow. Photo by Brandon Marshall
A new study maintains that Colorado has the third-most-serious drug problem of any state, with the highest percentage of both teenage and adult drug users in the country. However, the findings contradict a recent Colorado report showing that teen marijuana use here is actually below the national average. And the adult use statistics don't take into account the fact that cannabis consumption is legal for those over age 21 in Colorado.

"Drug Use by State: 2017's Problem Areas," created by WalletHub, uses fifteen metrics grouped under three main categories: Drug Use & Addiction (weighted to 50 percent), Law Enforcement, and Drug Health Issues & Rehab (25 percent each). But as we discovered during an interview with WalletHub analyst Jill Gonzalez on view below, the study doesn't differentiate between substances. All drugs other than prescription opioids are grouped together — meaning that marijuana is essentially treated as equal to heroin and other highly addictive substances.

Moreover, teenage pot use is down in Colorado, according to the Colorado Department of Public Health and Environment, which points out that "among adolescents, past month marijuana use is lower than past month alcohol use" — an "encouraging trend," in the agency's view.

In addition, a 2015 Healthy Kids Colorado Survey by the state showed that 21.2 percent of Colorado high-schoolers used marijuana, as compared to 21.7 percent nationwide. Moreover, the survey found that use actually declined from 2009 — prior to the legalization of recreational cannabis — to 2015, the year after the law went into effect. In 2009, 43 percent of Colorado high-schoolers said they'd tried marijuana at least once, and 25 percent had done so during the previous month; those numbers in 2015 were 38 percent and 21 percent, respectively.

That same year, CDPHE findings showed that 13.6 percent of adults identified themselves as cannabis users — a number that was significantly higher than the national average at the time. As such, the substance more than likely had an oversizes impact on the results as a whole, since WalletHub's study treats marijuana generically as an "illicit" drug (using the federal rather than the state standard).

In other words, the severity of Colorado's drug problem will differ depending on how you feel about marijuana.

Here's our Q&A with analyst Gonzalez, conducted via e-mail. Then, on page two of this post, we've included the complete WalletHub rankings by state, as well as an interactive map.

A photo from the WalletHub study about drug use by state.
WalletHub
Westword: Your findings show that Colorado has the third-most-serious drug problem of any state in the country, with the highest percentage of both teenage and adult users. To focus on teens first, studies published since the marijuana boom in Colorado have differed widely, with some showing teen use remaining stable and others suggesting that use has risen dramatically. Did your study look at year-to-year comparisons, or simply use over the previous month in comparison with other states?

Jill Gonzalez: The "Percentage of Teenagers Who Used Illicit Drugs in the Past Month" metric represents an annual average of yearlong data, collected from the Substance Abuse and Mental Health Services Administration.

Did your findings break down drug use by substance — or were all drugs treated as equal, whether they were cannabis or opioids?

Drug use was not broken down by substance. The term "Illicit Drugs" includes marijuana, hashish, cocaine (including crack), heroin, hallucinogens, inhalants and prescription-type psychotherapeutics used non-medically. Only "Opioid Pain Reliever Prescriptions" were given a separate metric.

To what did your study attribute the high level of drug use among Colorado teens? Was greater access among the main factors? Was there a more permissive culture that doesn't demonize drug use to the degree that may be seen in other states?

The study's Law Enforcement category includes sub-metrics such as "Number of Drug Arrests per Capita," in which Colorado ranked 41, "Number of Drug Arrests on College Campuses per 1,000 Students," in which it ranked 21st, "State Prescription Drug Monitoring Laws," in which it ranked 2nd, and "Maternity Drug Policy," in which it ranked 1st. The lower ranking in the former two and the higher ranking of the latter two are due to more lenient laws and thus might indicate greater access. It is important to note, however, that analyzing cultural factors and behavioral motivations for drug use goes beyond the scope of this study.

When it comes to adult drug use, was legal marijuana use for adults in Colorado factored in? Or was the legality or non-legality of the substance considered to be immaterial to your findings?

The term "Illicit Drugs" refers to a vast range of drugs, both illegal and legal.

Was the ease of access to marijuana for adults the major reason that Colorado finished in the number-one slot for drug problems? Or were other elements at play?

The study did not analyze the ease of access to certain drugs.

Colorado came in thirtieth for the Law Enforcement ranking. Were the state's marijuana laws a major reason for this finish? Without this placement, given your approach to measurement, is it possible Colorado would have wound up even higher in the rankings for drug problems — perhaps even in first place?

The Law Enforcement category is an aggregate of four different sub-metrics. The reason Colorado ranked as low as 30th in this category is because of its relatively low "Number of Drug Arrests per Capita" ranking (41st) and "Number of Drug Arrests on College Campuses per 1,000 Students" ranking (21st). If this category was removed from the analysis, it would be an entirely different study.

Your methodology uses as one of its measures the percentage of people who need treatment but haven't received it. How did you determine who fit in that category?

This data is from the Substance Abuse and Mental Health Services Administration and refers to respondents classified as needing treatment for illicit drugs but not receiving treatment for such problems at a specialty facility — i.e., drug and alcohol rehabilitation facilities, hospitals, or mental-health centers.

Based on your findings, does Colorado have major problems that need to be addressed immediately? Or are the issues perhaps less dire than they may seem at first blush because marijuana legalization in the state may have skewed the results?

One issue Colorado could focus on is its "Percentage of Adults Who Needed but Didn’t Receive Treatment for Illicit Drug Use in the Past Year," at 2.42% (14th highest).

Continue to see the complete WalletHub rankings, including an interactive graphic.