From seventeen down to... Westword
Sometimes you need a scorecard to tell all the players, but the scorecard is way out of date if you want to vote in today's Super Tuesday presidential primary in Colorado.

Back in 2018, this state's voters approved having a presidential primary rather than sticking with the caucus system, which became overloaded with 2016's heavy turnout. But the recent narrowing of the Democratic field isn't reflected in the mail-in ballots that were sent to the homes of registered major-party and unaffiliated voters in Colorado three weeks ago. The Democratic ballot list seventeen candidates, most of whom have dropped out, some very recently.

Mail-in ballots are easy and make voting more accessible, but they also can make your vote obsolete. If you've already turned in your ballot with a vote for someone who turned out to be a Democratic dropout, you're out of luck. Your vote won't count, even if your preferred candidate has already endorsed another. In other words, if you went for Pete Buttigieg, your vote doesn't transfer to Joe Biden, endorsed by (former) Mayor Pete yesterday.

"If you turned in a ballot and voted for a candidate who is no longer in the race, you cannot vote again," advised Colorado Secretary of State Jena Griswold in a March 1 tweet, after Buttigieg dropped out. 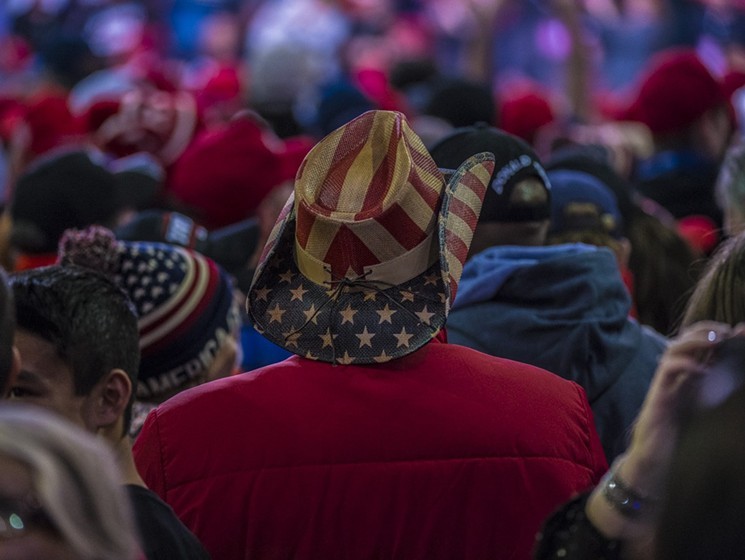 Evan Semón
But if you're a member of a major party or an unaffiliated voter who hasn't voted yet, this is your lucky day. Just dig out the ballot that was mailed to your house — if you're unaffiliated, you received both the Republican and Democratic ballots, thanks to another recent voting change allowing unaffiliated voters to participate in a primary, but you can only vote in one party's primary  — and then return it to a drop-off box or vote center. (Members of minor parties do not get to vote today...because there are no minor-party primaries.) If you've already filled out the ballot but haven't delivered it, you can change your selection by crossing off the name of your original pick and marking the oval next to your preferred candidate before dropping it off.

And if you can't find your ballot? You'll have to go to a vote center and get a replacement. "You can get a new ballot or vote in-person before 7 p.m." advises Griswold. To As of 3 p.m. yesterday, 1,226,276 ballots had already been returned, according to her office. If you're a new Colorado resident, you can even register to vote up to 7 p.m. today. And if you're a young Colorado resident, you might be eligible, too: Seventeen-year-olds who'll be eighteen by the November 3 general election, can vote in the primary.

This is one of those rare times procrastinating pays off: Enjoy it! (But not too much: Polls open in under two hours, and they do close at 7 p.m.)

If you need more information (where to drop off a ballot, where to get a ballot), try the Presidential Primary Election Page if you're in Denver, or the Colorado Secretary of State's GoVote page for other counties. "Colorado is a leader in election access," notes Griswold. "The fact that we have mail-in ballot, in-person voting, and that eligible people can register and cast a ballot even on election day shines in stark contrast to the voter suppression we see across the nation."

Fair warning, however: Some would-be voters have been confused to find that a drop-box location may not have a vote center, and have even worried about vote suppression. If you need to fill out paperwork in person, make sure you go to the right place by checking here.

And one last thing: Changes in Colorado's presidential primary don't affect the rules for local and state candidates going through the Colorado caucuses, set for March 7. Find out more about the caucuses here.

This story has been updated to include Buttigieg's endorsement of Biden.
KEEP WESTWORD FREE... Since we started Westword, it has been defined as the free, independent voice of Denver, and we'd like to keep it that way. With local media under siege, it's more important than ever for us to rally support behind funding our local journalism. You can help by participating in our "I Support" program, allowing us to keep offering readers access to our incisive coverage of local news, food and culture with no paywalls.
Make a one-time donation today for as little as $1.