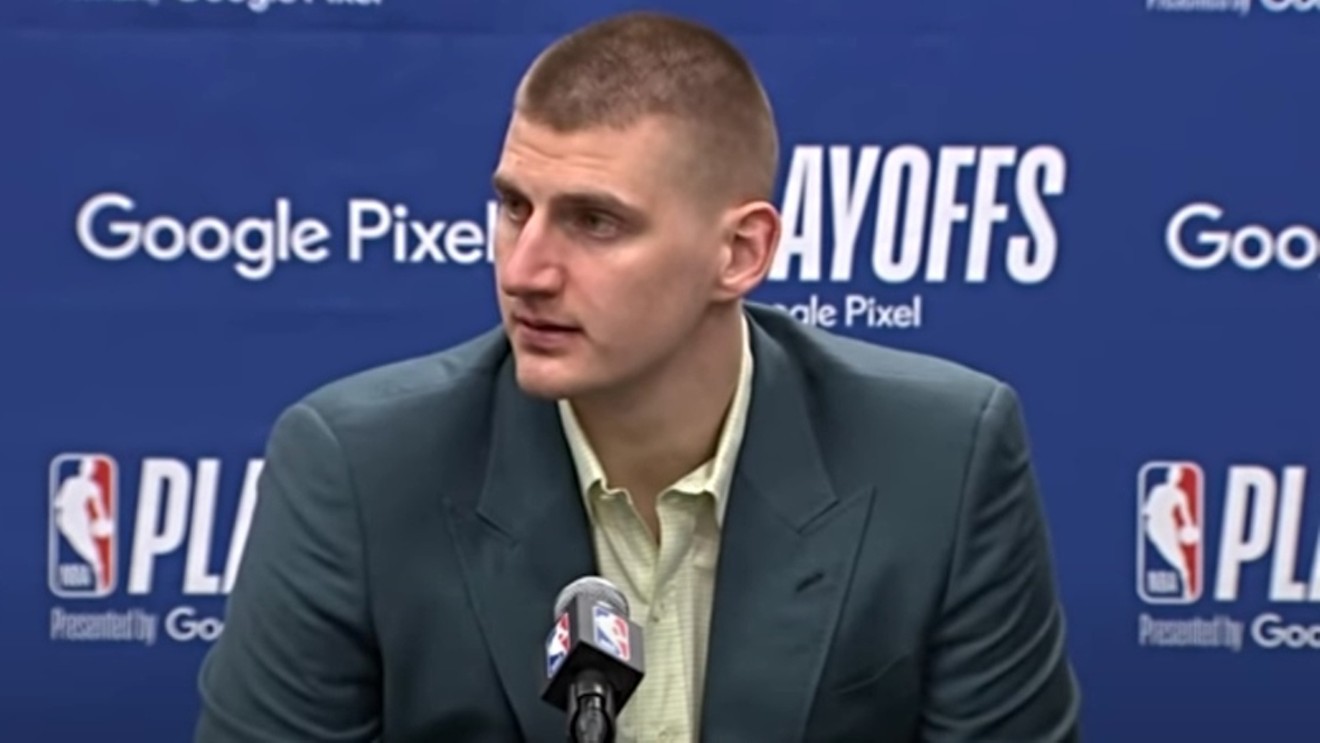 Denver Nuggets' two-time MVP Nikola Jokic as seen during an April post-game interview. YouTube
At 10 a.m. today, October 11, Altitude Sports officials are scheduled to appear outside Ball Arena, home of the Stanley Cup-winning Colorado Avalanche, whose title defense starts tomorrow, and the up-and-coming Denver Nuggets to announce a new campaign to push for an end to what the company describes as the "Comcast TV blackout."

If this declaration feels like déjà vu all over again, it should. Altitude Sports — owned, like the aforementioned franchises and National Lacrosse League champion Colorado Mammoth, by bajillionaire Stan Kroenke — launched a similar effort in late 2019, shortly after its high-stakes pissing match with Comcast began, and it wasn't exactly a rousing success. More than three years have now passed since Avs and Nuggets loyalists with Comcast could see all of the teams' games on Altitude — and the timing of today's event suggests that no one sees the new streaming deal with FuboTV, announced with much ballyhoo last week, as a solution to this ongoing problem.

During the late summer of 2019, Altitude's negotiations over pay rates hit an impasse with three major providers: DISH, which dumped the channel on August 29, followed by Comcast and DIRECTV, which did likewise on August 31. In late October, Altitude reached a deal with DIRECTV, the first service to which channel bosses urged a switchover, but pacts with the other two carriers remained elusive. A few weeks later, Altitude filed a class-action lawsuit against Comcast in U.S. District Court, with the document asserting that "Comcast now wants to extinguish competition from Altitude so that Comcast can pocket more of the money it takes from consumers each month for sports programming in the Denver DMA [Designated Market Area]."

Comcast's response: "This is a meritless lawsuit in an intensely competitive market where Comcast has no competitive regional sports network and Altitude has multiple distribution alternatives. Instead of pursuing baseless litigation, Altitude should engage in responsible commercial negotiations that would allow Comcast to distribute its programming to those customers who want it without driving up costs for customers who do not. Since at this point Altitude has rejected all reasonable offers, we have provided our customers with a credit until we reach an agreement. We will vigorously defend ourselves against Altitude’s claims."

Comcast has kept that vow. The combatants' various court maneuvers dragged on for more than two years before, in December 2021, the parties agreed to mediation to be overseen by Judge William J. Martinez. But a subsequent session in late February failed to break the impasse, and the same was true of a sit-down in July. At this point, no future meeting has been announced.

In April, Altitude spokesperson Tom Philand told Westword that "while the mediation is ongoing, the parties have agreed not to make any comments related to the mediation" — and this deal extended to online platforms. Comcast's "facts" page about its conflict with Altitude, launched in 2019, is currently down, as are twin Altitude sites that were accessible at the DontBlockMyNuggets and DontBlockMy Avs addresses.

Now, however, the ceasefire appears to be over. In a statement, Matt Hutchings, president and CEO of KSE Media Ventures, Altitude’s parent, says, "Comcast is simply not serving the interests of fans in Denver and throughout the Rocky Mountain region who want to watch their teams and root them on from home. We’re determined to give Colorado fans back the championship teams they’ve been missing."

Altitude's deal with FuboTV, an alternative to cable service designed to appeal to sports fans, is being pitched in much the same way as was the DIRECTV option. But while plenty of television consumers have cut the cord, Comcast remains the dominant TV provider in the region, and convincing longtime subscribers to dump it in favor of FuboTV is a big ask, as well as a pricey one. FuboTV's packages range from $69.99 per month for 130-plus channels and 1,000 hours of cloud DVR to $99.99 monthly for 230-plus channels and the same DVR cloud capacity.

Meanwhile, Altitude's court battle with Comcast isn't over. The Court Listener website provides links to a docket with an incredible 169 separate actions, the most recent on September 19. But such legal wrangling is secondary to a more immediate concern: The average fan of the Avs, Nuggets and Mammoth likely won't have easy access to viewing for the fourth season in a row.
KEEP WESTWORD FREE... Since we started Westword, it has been defined as the free, independent voice of Denver, and we'd like to keep it that way. With local media under siege, it's more important than ever for us to rally support behind funding our local journalism. You can help by participating in our "I Support" program, allowing us to keep offering readers access to our incisive coverage of local news, food and culture with no paywalls.
Make a one-time donation today for as little as $1.