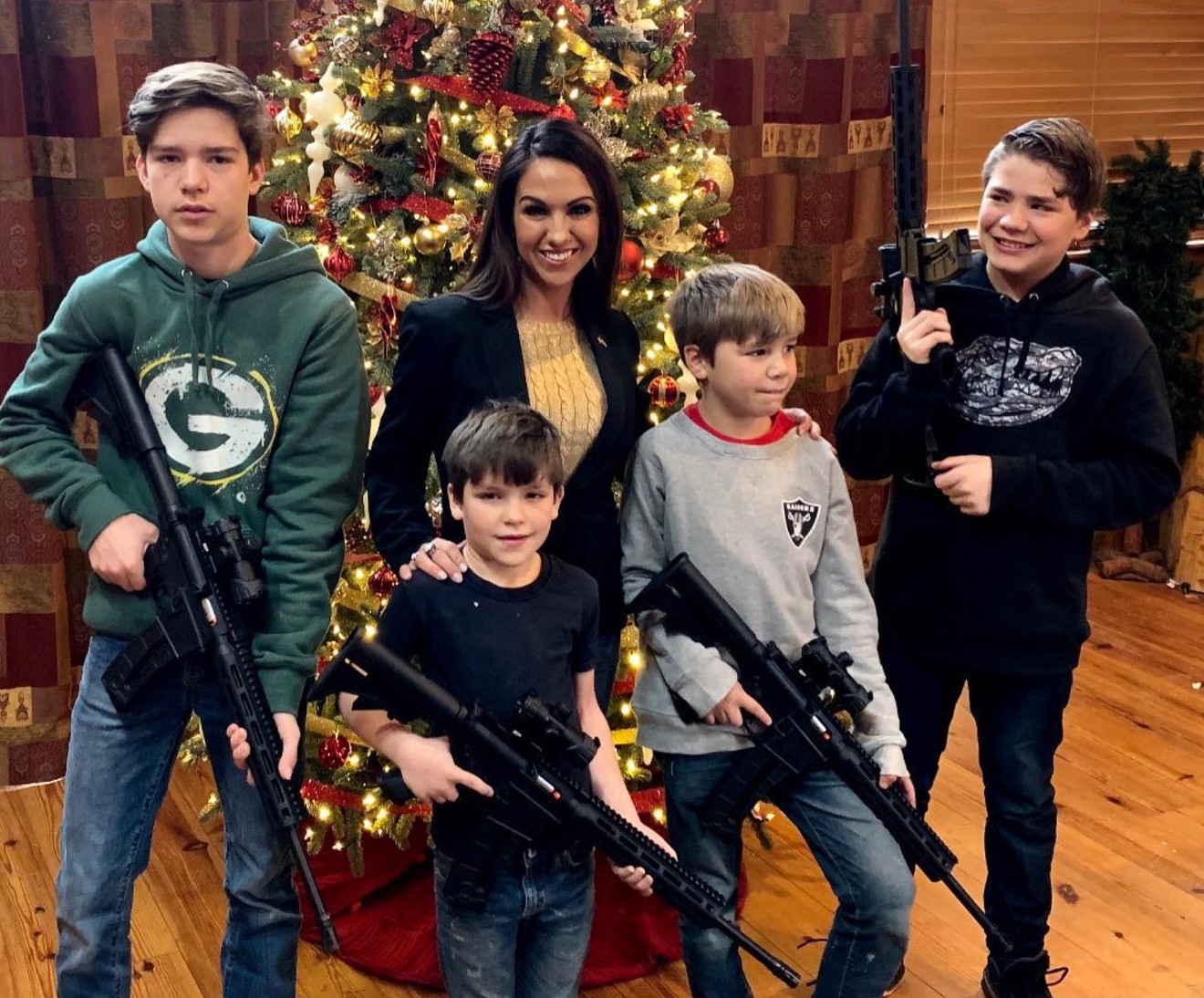 The Boeberts, ready to legally kill whoever might come down the chimney. Twitter
Nothing says Christmas like assault weapons in front of a tinseled tree. Such are the seasonal sentiments of the modern GOP.

Twitter
Representative Lauren Boebert recently posted a Christmas photo on Twitter in which she poses with her four sons, each of whom has a firearm. Aside from one boy wearing a Raiders sweatshirt, the picture was surprisingly unoriginal for a woman who’s become known nationally for her gun tirades, most notably her insistence on carrying a firearm in the halls of Congress and Zoom-calling into a session while displaying a gun shrine on the shelves behind her.

This particular photo was a response to a stupefying holiday message from Kentucky Representative Thomas Massie, who may not be as loud as Boebert, but could be just as in love with ignorance — he called John Kerry’s position on climate science “pseudoscience,” introduced a bill to abolish the U.S. Department of Education, and signed on to Florida Representative Matt Gaetz's bill to eliminate the EPA. And last week, shortly after a kid with tragic access to guns killed four and injured seven in a Michigan school shooting, Massie posted a photo of his own heavily armed family in front of their Christmas tree, asking Santa to “bring ammo.”

Twitter
“That’s my kind of Christmas card!” beamed Boebert, who then went to make one of her very own, telling Massie that the Boeberts “have your six!” Which is the sort of celebratory combat jargon clearly learned from repeated viewings of Top Gun and long hours playing Call of Duty, and not any sort of actual military service.

Boebert no doubt saluted Massie’s holiday greeting in part because his had been so well received — which is to say, condemned by most but lauded by members of the bloody-red far right who want nothing more than their outrage stoked and their perceived enemies provoked, defining themselves not by their own aspirations, but by how much they can ridicule and obfuscate. For them, it’s all about angry theatrics, not about effective governing. It’s not even about the guns themselves, as much as Boebert and Massie evidently fetishize them; it’s about what the guns will do to the sensibilities of the “libtards” and the “snowflakes” and the “cucks.” It’s about trolling America. It’s only about trolling America.

A better response — and one more in keeping with the majority of Americans — came from Fred Guttenberg, the activist against gun violence whose daughter Jaime was killed in the Parkland, Florida, shooting in 2018. “Since we are sharing family photos,” Guttenberg posted to Twitter, “here are mine. One is the last photo that I ever took of Jaime, the other is where she is buried because of the Parkland school shooting. The Michigan school shooter and his family used to take photos like yours as well.”

Guttenberg's subsequent response to Boebert's photo was more direct: "Because of your incompetence as a parent, as a responsible gun owner and as an American I definitely see a future school shooter in this photo."

Of course, such responses fall on purposefully deaf ears in today’s far-right Troll Caucus. Even during the holiday season, cognitive dissonance is the rule of the new GOP, the banner that Boebert and those of her ilk fly without really knowing how to define it. But they understand what it demands: lip service to faith while going against anything the biblical Jesus would have supported. The Prince of Peace, remember? The one who preached non-violence and the sincere care for our neighbors more than for ourselves? There was a time in this country — not that long ago — when even gun-rights advocates and Republican leaders would stand against Christmas wishes that include a violent political agenda. A time when the holidays were a period for coming together, for communal spirit, for joy and love for our fellow human beings.

It's the highest of ironies that the GOP now disrespects and undermines the religious message of Christmas, that holiday on which they’ve long insisted the Democrats and “liberal media” have declared war. But Boebert, Massie and all those who support them aren’t just anti-Christmas: They’re the coal in America’s stocking.
KEEP WESTWORD FREE... Since we started Westword, it has been defined as the free, independent voice of Denver, and we'd like to keep it that way. With local media under siege, it's more important than ever for us to rally support behind funding our local journalism. You can help by participating in our "I Support" program, allowing us to keep offering readers access to our incisive coverage of local news, food and culture with no paywalls.
Make a one-time donation today for as little as $1.