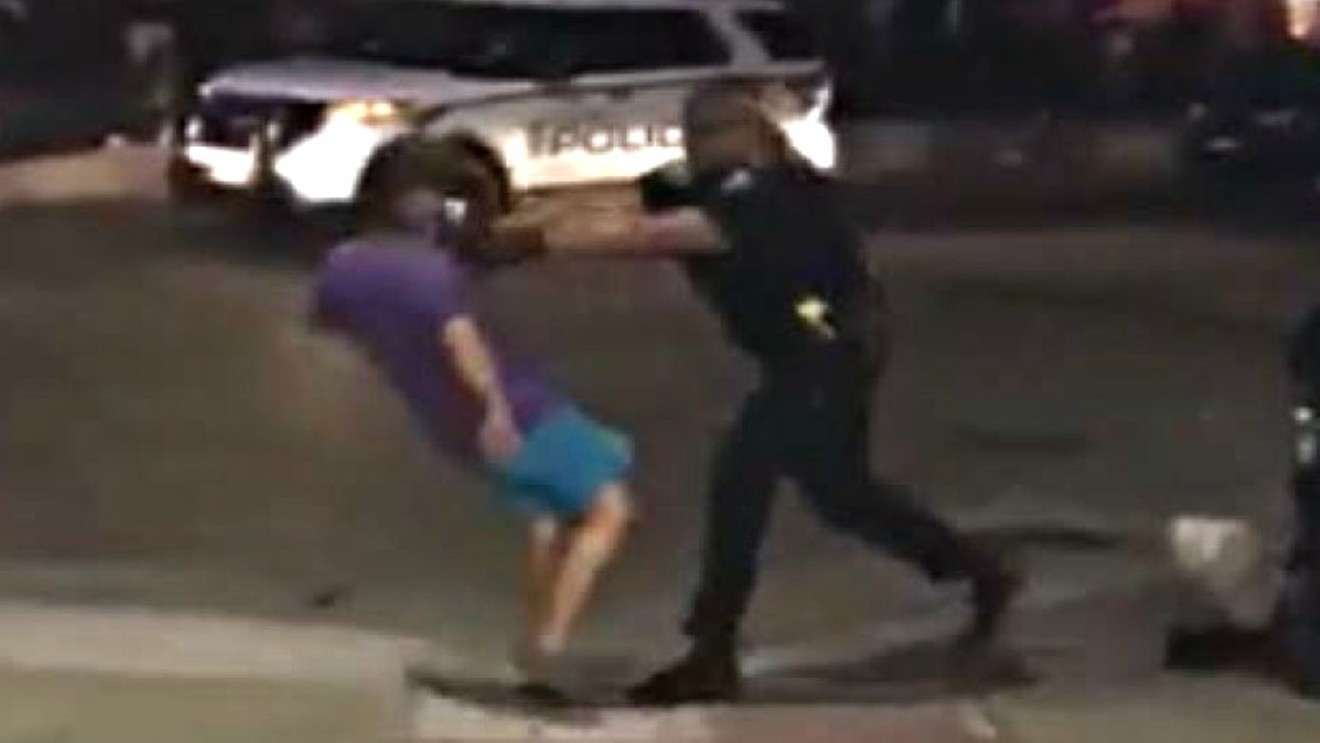 A screen capture of Officer Waylon Lolotai shoving Kelly Clark. See two videos of the incident below. Frank & Salahuddin LLC
A Boulder police officer and onetime college football player being sued by a woman he shoved to the ground without any apparent provocation had previously resigned from the Denver Sheriff's Department while facing possible discipline for an alleged excessive-force incident.

In addition, the lawsuit points out that the officer, Wayne Lolotai, has been involved in several other controversial incidents during his time in the Boulder Police Department — slapping away a phone from a woman who was recently cleared of any wrongdoing and later being among the law enforcers who pulled guns on a Naropa student of color on his own property.

One of the officers involved in the latter scenario, John Smyly, resigned from the BPD earlier this month. But an independent review of the confrontation found no impropriety in the procedures used by the police.

Adam Frank, an attorney with the law firm of Frank & Salahuddin LLC, filed the aforementioned complaint on behalf of Kelly Clark, who briefly went airborne during her encounter with Lolotai; this moment was captured in two videos shared here, with a witness clip supplemented by a recording from the officer's body camera.

Frank points out that the City of Boulder and the department are named as defendants in addition to Lolotai because of what he refers to as a "pattern-and-practice claim, which simply says, 'You hired a cop you knew used excessive force and then you didn't give him any remedial training to teach him not to do that — no additional supervision.'"

As a result, he goes on, Boulder authorities "functionally ratified what he had done, because they hired him knowing what he'd done before. And that means they're responsible for doing nothing to teach him not to use excessive force — and then he goes and uses excessive force." 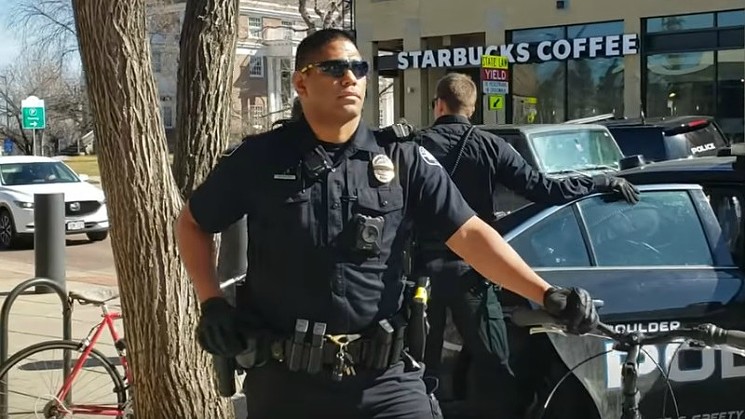 Officer Waylon Lolotai as seen in a March video shared by ZFG Videography, which was associated with a lawsuit threat against the Boulder Police Department over a separate incident earlier this year.
ZFG Videography via YouTube
Boulder communications director Patrick von Keyserling noted that "the city does not comment on pending litigation" after being contacted by Westword. Likewise, Boulder Police Department spokesperson Shannon Aulabaugh declined to address the suit itself — but she pushed back on any suggestion that the BPD had ignored a 2014 incident during which then-Denver deputy Lolotai was investigated for pummeling Isaiah Atencio Arguello, an inmate at the Denver Detention Center.

In a statement provided to Westword, Aulabaugh also addressed the timing of Lolotai's hiring by the BPD. He came aboard in 2016 but had first applied the previous year, when the Arguello inquiry was still ongoing. She wrote: "The City of Boulder does not hire police officers who have any sustained use-of-force allegations. Any assertion that the Boulder Police Department directs officers to resign before they can be found guilty of a use-of-force allegation in order to be hired by the City of Boulder is absurd and completely inaccurate."

Before starting his career in law enforcement, Lolotai was a noteworthy athlete. His bio and a separate article on the University of Colorado Bears website reveals that he was born in Pago Pago, American Samoa, but grew up in Lafayette and graduated from the town's Centaurus High School in 2006, after which he served a two-year mission in St. Louis on behalf of the LDS church. He subsequently enrolled at the University of Hawaii, where he red-shirted as an offensive lineman with the football team in 2009 and was a member of the scout team each of the next two years. In 2012, he transferred to UNC, which used him as a tight end specializing in blocking that season and the next.

During his senior year, he was listed as standing 6' 3" and weighing 256 pounds.

By 2014, Lolotai was a deputy in the Denver Sheriff's Department, and on December 18, he was caught on video rushing inmate Arguello and pushing him down roughly on a set of metal stairs, after which he and another colleague manhandled him with extreme prejudice.


Attorney Frank subsequently obtained the voluminous Internal Affairs file on the investigation into Arguello's complaint about this matter and a previous one. Among the documents is a February 1 letter in which the inmate was told no wrongdoing had been found in the first incident, but "the actions of the 2 pod deputies" — including Lolotai —  "will be reviewed by the DSD Conduct Review Office." And on May 19, a recording from a hearing about potential discipline includes Lolotai's attorney making a reference to a "violation of rule and regulation 300.22: Inappropriate Use of Force."

Seventeen days later, on June 6, Lolotai resigned from the Denver Sheriff's Department, after which the investigation was suspended.

Is it possible the folks responsible for hiring at the Boulder Police Department missed this material? After all, the dozens of documents and recordings in the file demonstrate why agencies across the country remain at risk of hiring individuals who left their previous departments under dubious circumstances. The Boulder District Attorney's Office keeps its own roster of officers who've received Brady letters, a document that identifies law enforcers who could have credibility issues if asked to testify at trial; the letters have evolved into what's essentially a blacklist for suspect cops. But most departments don't keep these records, and there's no nationwide repository for information about badge-wearers with ugly track records — which is why USA Today recently created a database of its own. The newspaper found more than 30,000 police officers banned in 44 states, including 365 in Colorado.

By quitting as a Denver deputy before he could be disciplined, Lolotai avoided ending up with this kind of mark on his record — and BPD spokesperson Aulabaugh stresses that department personnel went through the file before offering him a job. But she also insists that the documents include a letter saying the claims against Lolotai were unsubstantiated, raising the prospect that the line about the ongoing review in the decline letter was missed.

To Frank, that's not an acceptable excuse. "There's no universe where that letter can be read in any way that clears Officer Lolotai," he says. "Boulder claims they saw the letter and decided he was cleared, but that's ridiculous."

The incident with Clark, 41, took place during the early-morning hours of July 15, 2018. This is what it looked like from the perspective of Lolotai's body cam.


According to Frank, Clark "was on her way home after a concert in Boulder on The Hill, and the police were in the process of using a significant amount of force to arrest an unknown man [later identified as Justin Johnson]. They had a bag over his head, a spit hood, and it looked bad, so a pretty big crowd had gathered to watch four Boulder officers use a heck of a lot of force to subdue this guy."

Given recent stories about in-custody deaths, Clark "wanted to make sure this person was still breathing," he goes on. "So she stepped forward but stayed a safe distance away. She's never been in trouble in her life, but she wanted to make sure the police were not killing this man. She was standing there, looking, when Officer Lolotai yelled, 'Get back!' He didn't say how far or where. Then he yelled it again — and he charged at her."

In Frank's view, "There was no reason anyone would see her as a threat. She's a five-foot, four-inch woman standing peacefully a safe distance away, and he's a former college football player. But he lays her out. She flew back and landed on her back and wrist — and she was lucky she didn't slam her head against the lamppost."

This is what it looked like on a witness video.


Afterward, Clark was handcuffed and made to sit on the curb for an extended period of time, after which she was handed a summons for obstructing a police officer. The charge was later dismissed.

The lawsuit asserts that this kind of behavior on Lolotai's part arose at other times after he became a Boulder police officer.

The first example involves an August 26, 2018, exchange with Michele Rodriguez, who was sitting with a group suspected of having an open alcohol container. The suit states that after Lolotai told her she was being detained, she asked him to call his supervisor, and when he refused to do so, she pulled out her cell phone and said she was going to dial 911. He's quoted as telling her, "That's it, you're going to jail," then slapping the phone out of her hand, forcing her to the ground and cuffing her. Rodriguez was later accused of obstructing a police officer and resisting arrest. The latter beef was dismissed in April, and earlier this month, she was acquitted of obstruction.

Following the March 1 episode with Naropa student Zayd Atkinson, also described in the complaint, Lolotai was caught on video again during the April 5 arrest of Sammie Lawrence, who tried to capture images of him ticketing several homeless people near ballfields in the Mapleton neighborhood of Boulder. Lawrence walks with the assistance of a cane because of a seizure disorder, and when he didn't immediately drop it when ordered to do so, Lolotai kicked the staff away from him and took him to the ground before busting him for obstructing a police officer and resisting arrest, too. Click to see a video of what happened.

Boulder has until mid-July to respond to the lawsuit. In the meantime, Frank maintains that the city's actions are "doubly damning. Boulder doesn't take the position that just because you used excessive force in the past doesn't mean you're a bad cop and we'll give you a second chance. They knew he'd used excessive force, yet they decided to hire him anyway. And the result is him using excessive force, first against Ms. Clark and then in these other high-profile incidents. That's an absolutely natural consequence."

Click to read Kelly Clark v. Waylon Lolotai et al., and the Isaiah Atencio Arguello decline letter.
KEEP WESTWORD FREE... Since we started Westword, it has been defined as the free, independent voice of Denver, and we'd like to keep it that way. With local media under siege, it's more important than ever for us to rally support behind funding our local journalism. You can help by participating in our "I Support" program, allowing us to keep offering readers access to our incisive coverage of local news, food and culture with no paywalls.
Make a one-time donation today for as little as $1.