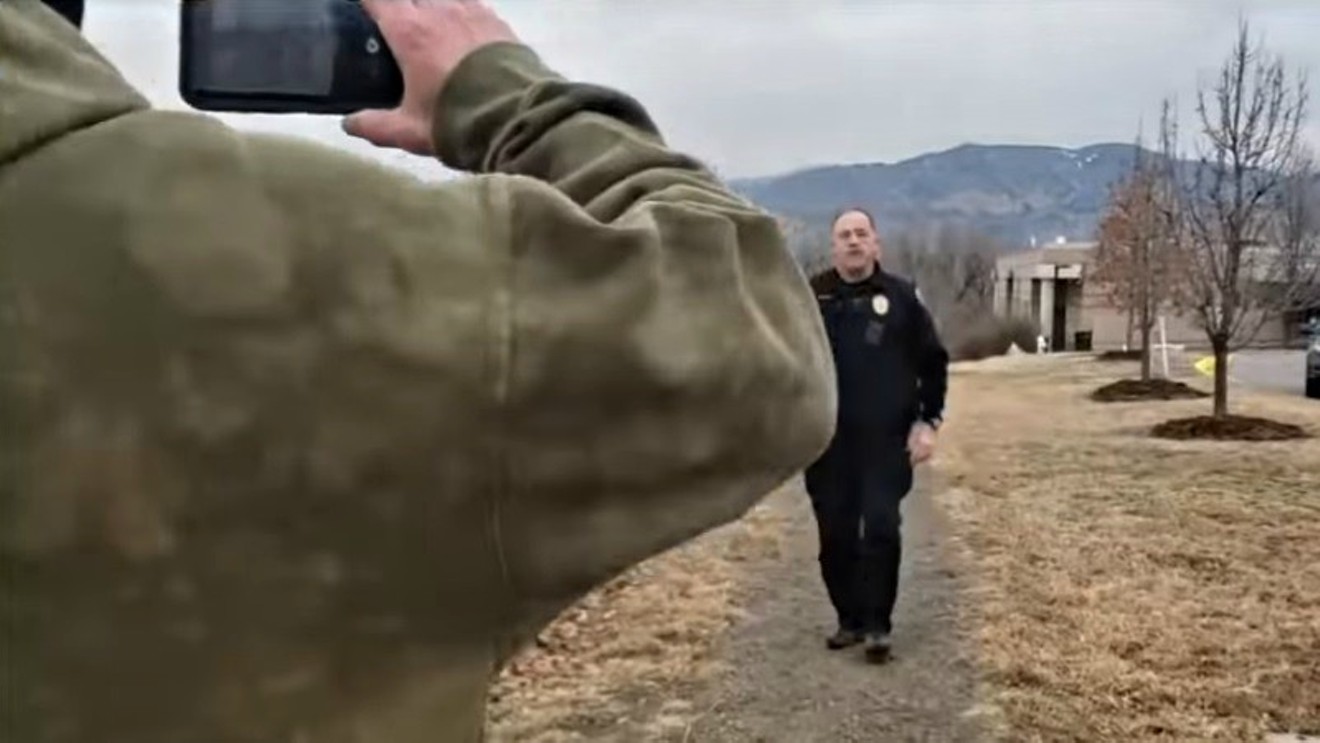 A screen capture from a Colorado Donkey Watch video at the center of a complaint against Boulder jail personnel. YouTube
A letter sent to Boulder's city and county attorneys threatens a lawsuit over the at-times rough arrest of two men for recording video on a public sidewalk near the community's jail on December 28.

Jedon Kerr and Dean Schiller were briefly detained before being released without charge.

Attorney David Lane, who represents the videographers in question and wrote the aforementioned letter, thinks there's no way to interpret the images as anything other than proof that law enforcers screwed up in a way that's guaranteed to cost taxpayers.

"We've got them on video violating the Constitution," Lane says. "It's a pretty cut-and-dried, slam-dunk situation."

See the first clip below:


Kerr and Schiller are behind YouTube channels dubbed Colorado Donkey Watch and ZFG Videography. The description of the latter reads in part: "ZFG is a company dedicated to creating cutting-edge, captivating and entertaining digital media. We are a group of independent journalists and filmmakers who are prepared to push the boundaries of 'acceptable behavior' in order to inform and entertain the public."

Both channels contain multiple interactions between videographers and police or sheriff's office personnel.

When asked why Kerr and Schiller were taking video in and near the Boulder jail complex on the 28th, Lane replies, "That's their business. It's nobody else's business. They have a right to do it, and they don't have to tell anyone what their reasons are."

However, Blacklab3l Copwatch, a third YouTube channel, supplemented its sharing of the video above with the following text: "Freedom Fighters, today I’d like to introduce a new activist that goes by the name of Colorado Donkey Watch. On Friday, December 28, Colorado Donkey Watch, along with another brand new activist that goes by ZFG Videography, went to do a First Amendment audit at Boulder County jail to see if these public servants and officials would honor their oath and allow them to exercise their First Amendment right to record in public."

Continue to see the second video:


Lane's summary of what went down begins like so: "They walk into the lobby of the jail, which is open to the public, and take video for a few minutes. Then they walk back outside and are on public sidewalks when deputy sheriffs and police show up."

As seen in the videos and recounted in the letter, one of the officers tells Kerr to sit down and requests his ID. In response, Kerr asks if he's being charged with a crime. Rather than providing an answer, the officer repeats his demand for the ID — and when Kerr says he doesn't think he has one in his wallet, the officer reaches into the videographer's pants, fishes out the wallet, and looks for an ID himself. The letter contends that "the officer used force in searching Mr. Kerr, shoving his knee into Mr. Kerr's back until he screamed in pain."

The also-ID-free Schiller was searched, too, and Lane thinks he knows why. In his words, "When someone questioned [the officers'] authority, they immediately resorted to showing these people who was boss."

Arrests followed, "but the only problem was, no crime had been committed," Lane points out.

Indeed, after being taken inside the jail, booked and placed in a cell for approximately ninety minutes, Kerr and Schiller were let go. But in Lane's view, the damage was already done. The officers "did assert their manliness," he allows. "But unfortunately, they're going to have to pay us thousands of dollars for the fun of doing that."


After the incident, the Boulder Sheriff's Office issued a January 4 statement offering a very different take about what went down. On the 28th, the account asserts, "two suspicious men were observed by an off-duty sheriff's deputy wearing black masks and walking around the Boulder County jail complex recording video footage. The men were observed in both public areas as well as areas posted 'No Trespassing' within the jail complex. Officers from the Boulder Police Department subsequently contacted the two men in the parking lot to investigate their suspicious behavior and were later joined by on-duty sheriff's deputies. "

The videos that resulted were recorded "under the auspices of a 'First Amendment Audit' campaign," the release goes on, and "their public posting has caused an influx of angry phone calls, including 'robo-calls,' from those who support their cause and believe their detention was unlawful as officers investigated their suspicious behavior. The Sheriff's Office is responsible for the safety and security of the jail and other public facilities and will investigate any suspicious behavior accordingly."

The statement adds: "Beyond the December 28 incident, members of the 'First Amendment Audit' movement have continued to try and instigate conflicts with law enforcement over the past week at a number of public facilities in and around Boulder, including a subsequent attempt involving the same behavior at the jail. The 'First Amendment Audit' movement appears to be an attempt at provoking a confrontation with law enforcement officers called to investigate their suspicious behavior."

Such arguments hold no water for Lane, who stresses that law enforcers should know by now that recording video in public areas is legal. But he also believes a certain percentage of officers in such circumstances will still leap to incorrect conclusions anyhow.

Attorney David Lane represents the two videographers.
9News file photo
"It's kind of like paper-training a puppy," he suggests. "It takes a while for the lessons of the United States Constitution to sink in with some officers."

Moreover, he believes others are beyond teaching. "You've seen circus bears riding bicycles before?" he wonders. "You just have to realize that some bears will never learn to ride a bicycle."

Lane has plenty of experience in cases like this one. Recall that late last year, his lawsuit on behalf of Joshua Condiotti-Wade, who was tased during an attempted bust after demonstrating on public property in Commerce City, was settled for $175,000.

In this instance, though, Lane has opted for a preliminary step. "One nasty-lawyer letter is sometimes worth a thousand pleadings in a filed court case," he argues. "So I'm offering them a chance to get out more cheaply now than if they make us jump through litigation hoops."

The clock on an opportunity to avoid a lawsuit is ticking; Lane has given authorities in Boulder until Friday, February 8, to respond. In light of that, Assistant Boulder County Attorney Dea Wheeler writes in an email to Westword that "it would be premature to discuss the allegations with the media." She adds: "As a general matter, the Boulder County Sheriff’s Office is adamant about upholding the civil rights of all individuals. The Sheriff’s Office is also responsible for operating the Boulder County jail, and this includes assessing and responding to potential security threats."

Click to read the Jedon Kerr and Dean Schiller v. City and County of Boulder demand letter.
KEEP WESTWORD FREE... Since we started Westword, it has been defined as the free, independent voice of Denver, and we'd like to keep it that way. With local media under siege, it's more important than ever for us to rally support behind funding our local journalism. You can help by participating in our "I Support" program, allowing us to keep offering readers access to our incisive coverage of local news, food and culture with no paywalls.
Make a one-time donation today for as little as $1.