Tyler Sanchez in 2012, after the criminal case against him was dismissed. Courtesy of Fox31
A jury has cleared two Douglas County detectives sued by the family of Tyler Sanchez, a mentally disabled man who was nineteen when he falsely confessed to a sex crime against an eight-year-year old girl after approximately eighteen hours of interrogation over a 36-hour period.

The criminal case against Sanchez was dropped in 2012, nearly three years after the original July 2009 incident at Parker's Stonegate subdivision, and the lawsuit took even longer to come to trial. John Culver, the lawyer who handled the civil case on behalf of Sanchez, hasn't responded to an interview request from Westword, and deputy Douglas County attorney Kelly Dunnaway, tasked with defending the detectives, Mike Duffy and Heather Mykes, offered a single-sentence statement about the resolution: "The jury weighed the evidence, and the evidence led them to conclude that the deputies had not acted maliciously, nor even wrongfully."

However, attorney Iris Eytan, who represented Sanchez in the criminal matter and testified in the civil case, finds the results "disheartening" given their impact on a young man already facing more than his share of challenges.

"They didn't get away with prosecuting him and putting him away for life," Eytan emphasizes. "That, fundamentally, is the most important thing. But he and his family have gone through so much shame and embarrassment through almost ten years of reliving this case."

Eytan acknowledges that the challenge was great for the team behind the lawsuit. "The civil claim was for malicious prosecution, and that put the burden on Tyler's lawyers to show that when they filed their affidavit claiming probable cause for arrest, the detectives knew that Tyler wasn't the suspect they were looking for."

That's something investigators should have realized early on, in her view. "He didn't match the description of the perpetrator in this terrible sex offense" — police had been on the lookout for a forty-year old man weighing around 200 pounds — "and there was no corroborating evidence. They said Tyler was evasive and intoxicated, even though they gave him several drug and alcohol tests while he was there, and they all came up with zero. But they kept him there — an individual with significant cognitive, speech and language impairment — and after eighteen hours, they got him to confess."

Near where the sexual assault took place.
Courtesy of Fox31
Afterward, more clues pointing to Sanchez's innocence popped up — not the least of which was DNA from the girl's panties that wasn't a match. But the prosecution continued.

"I can say with absolute certainty that Tyler didn't commit this action," notes Eytan, who began working for the Sanchezes after Tyler was charged. "He was completely innocent and was framed to close this case and other cases they claimed he was guilty of — a bunch of burglaries. They dropped those, but he was held in solitary confinement for four months until I was able to put some facts together for a judge and show that the million-dollar bond he was being held on was completely out of context and obtained under false pretenses. The judge reduced the bond, first to $100,000 and then to $50,000, and he finally got out. But he wasn't able to go home, and he was put under strict GPS conditions. And the fact that he'd been held in such confinement considering his significant disability had a terrible effect on him. We had a psychologist meeting with him. He was really breaking down."

This situation didn't change until April 2012, when Douglas County dismissed the charges against Sanchez. But in a statement, Chief Deputy District Attorney John Topolnicki rejected the idea that he'd been mistreated in any way.

"The police did not use coercive interrogation techniques, and there has never been a court finding that improper techniques were used," Topolnicki maintained, adding, "The DNA analysis in this case did not exonerate the Defendant. The evidentiary value of the touch DNA evidence was for elimination purposes only. The DNA recovered from the underwear was not from semen or bodily fluids that would have positively identified a perpetrator. The analysis eliminated the defendant as a contributor to the mixture, but did not exonerate him as the perpetrator of the crime." 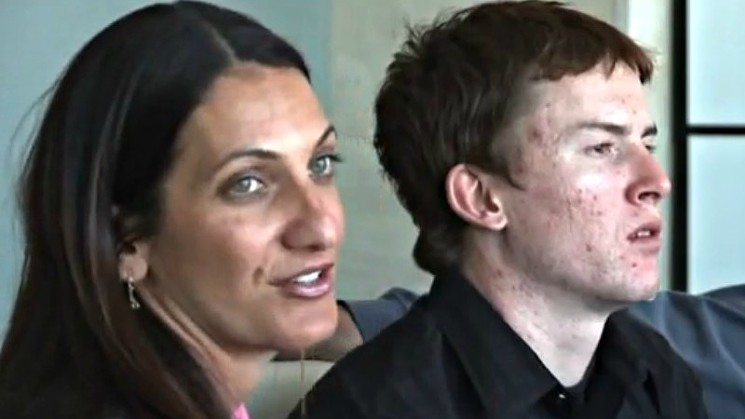 Attorney Iris Eytan with Tyler Sanchez in 2012.
Courtesy of Fox31
Topolnicki also insisted that the detectives "were not aware of [Sanchez's] disabilities until revealed by evaluations and medical and educational records provided much later in the proceedings."

The subsequent lawsuit was an uphill battle, too. According to Eytan, "There was a lot of litigating before getting to the trial stage, including two appeals." A 2016 ruling by the 10th Circuit appeals court allowing the matter to progress is accessible below.

Along the way, Eytan discloses, the Sanchez clan agreed to a confidential settlement with the Parker Police Department for its involvement in the matter. But because of the latest verdict, his loved ones will receive no compensation for the three-year period during which Sanchez remained under suspicion in Douglas County, including the $360 per month they paid for the aforementioned GPS tracking device.

For Eytan, who's grown close to the Sanchezes over the years, the frustration over the decision is compounded by her opinion that the detectives weren't the only ones responsible for the nightmare through which they've been living.

"In the United States, prosecutors are immune" from complaints like the one filed against the detectives, she says. "But if things were different, I have a strong belief, not a guess, that they would have been found responsible for holding Tyler for as long as they did and prosecuting his case for as long as they did."

Click to read the U.S. Court of Appeals decision in the case of Tyler Sanchez v. Mike Duffy, et al.
KEEP WESTWORD FREE... Since we started Westword, it has been defined as the free, independent voice of Denver, and we'd like to keep it that way. With local media under siege, it's more important than ever for us to rally support behind funding our local journalism. You can help by participating in our "I Support" program, allowing us to keep offering readers access to our incisive coverage of local news, food and culture with no paywalls.
Make a one-time donation today for as little as $1.