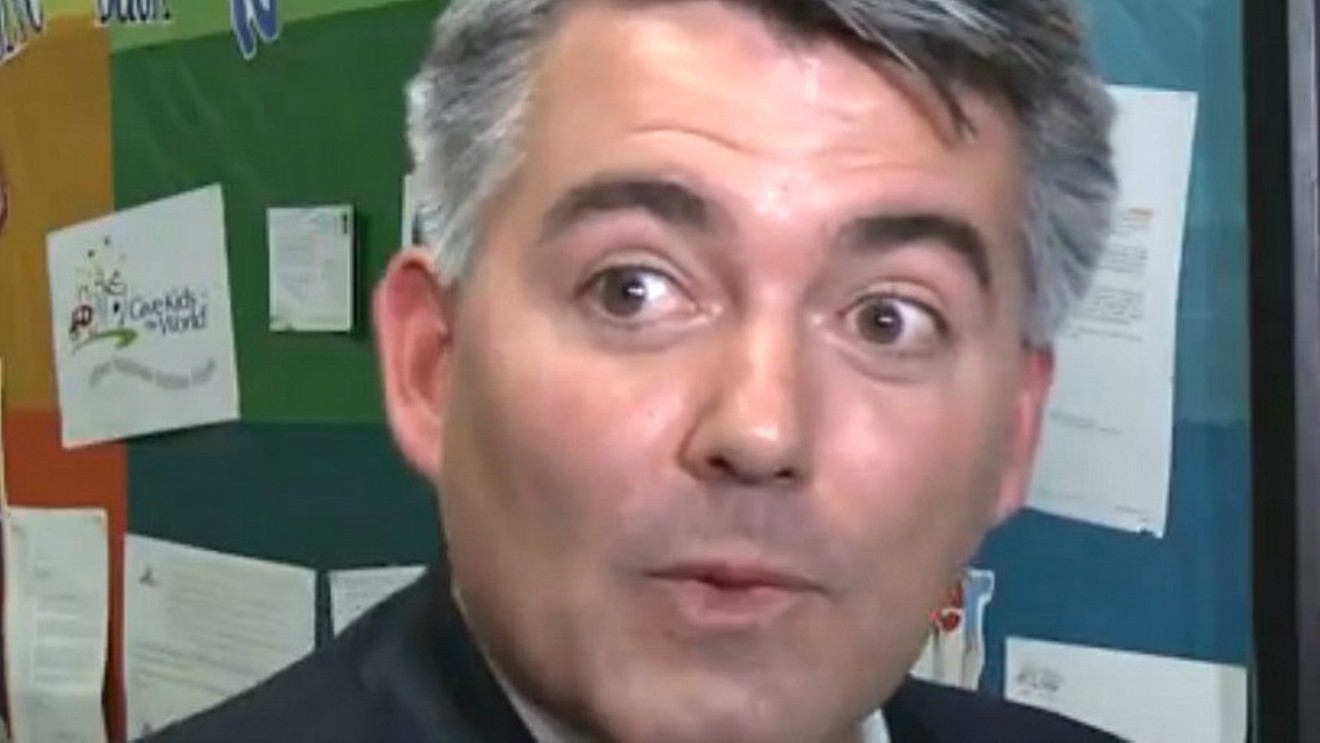 The expression Senator Cory Gardner was probably wearing when he heard Doug Jones declared the winner in the Alabama race for U.S. Senate. YouTube file photo
Colorado Senator Cory Gardner is being both celebrated and castigated for his role in the apparent defeat of fellow Republican Judge Roy Moore in Alabama's U.S. Senate election yesterday, December 12. As is clear from a collection of tweets on view below, those who backed Moore's opponent, Democrat Doug Jones, see Gardner's decision to criticize and withhold financial support from Moore as a heroic act, while fans of the judge and President Donald Trump, who offered the alleged sexual assaulter his full-throated endorsement, see his moves as downright traitorous to the GOP cause.

Gardner became a player in the Jones-Moore drama because of his position as chairman of the National Republican Senatorial Committee, an organization charged with making sure folks from his party win election or re-election. He kept his love from Moore, however, and that's not all. In the days and weeks prior to election day, he not only said the Senate should vote to expel the judge should he emerge victorious, but he withdrew offers of NRSC cash after accusations of sexual impropriety decades ago surfaced.

As it became clear last night that Moore was going to fall short, the Rachel Maddow-led crew on MSNBC speculated about whether Gardner might take heat for his positions — and it's likely that his relationship could get awkward with Trump, who's not exactly a forgive-and-forget kinda guy. But Gardner is playing the long game from a personal standpoint. In 2020, he'll be up for re-election in Colorado, a state that's currently either purple or blue, depending on your point of view — and love letters to Moore would certainly have been used against him by his future Dem opponent.

Now Gardner doesn't have to deal with that probability — and the statement he issued after the Moore collapse represents an artful attempt to refute the turncoat label. "Tonight’s results are clear — the people of Alabama deemed Roy Moore unfit to serve in the U.S. Senate," he wrote, adding, "I hope Senator-elect Doug Jones will do the right thing and truly represent Alabama by choosing to vote with the Senate Republican Majority."

The odds of the latter happening are mighty slim. In the meantime, though, Gardner is being showered with Twitter love and Twitter hate in roughly equal measure. Here are our picks for the ten most memorable examples. Count them down below.

Indeed...The turncoat repubs including Senator Cory Gardner, Richard Shelby, McConnell and, and, and list too long..We'd have a Senator Moore had it not been for them. It's sad. #MAGA #TRUMP2020

People within the GOP are trying to blame Mitch McConnell & Cory Gardner for Roy Moore loss. Let me say this: I can care less about the fate of McConnell & Gardner but this fate of the Republican Party is on their complicity to accept Trump & Bannon. They're ALL to blame.

Heroes and Zeroes of the GOP after the Alabama Election:

I think the happiest people in DC right now are Mitch McConnell and Cory Gardner. Although they would like another R in the Senate, they didn't want to deal with Roy Moore fallour.