City engineers say the Platte to Park Hill Stormwater Systems program is needed to protect northeast Denver neighborhoods from flooding during a hundred-year storm event. But neighborhood groups in the affected areas have objected to several components of the project, including regrading the western third of the golf course to provide stormwater detention. Although the area would only be submerged in the event of a 100-year flood, the renovation will close the golf course for more than a year and require bulldozing hundreds of trees. Other controversial pieces of the plan include a fifteen-block open channel to be dug through the Cole neighborhood and an outfall to the South Platte that winds through a Superfund site.

One central argument against the project has been that residents are being required to shoulder a stiff fee hike — about $116 over the next five years for the average household — for work that primarily provides flood protection for the below-grade I-70 expansion, the planned renovation of the National Western Center and other new developments along RTD's new rail line to the airport. 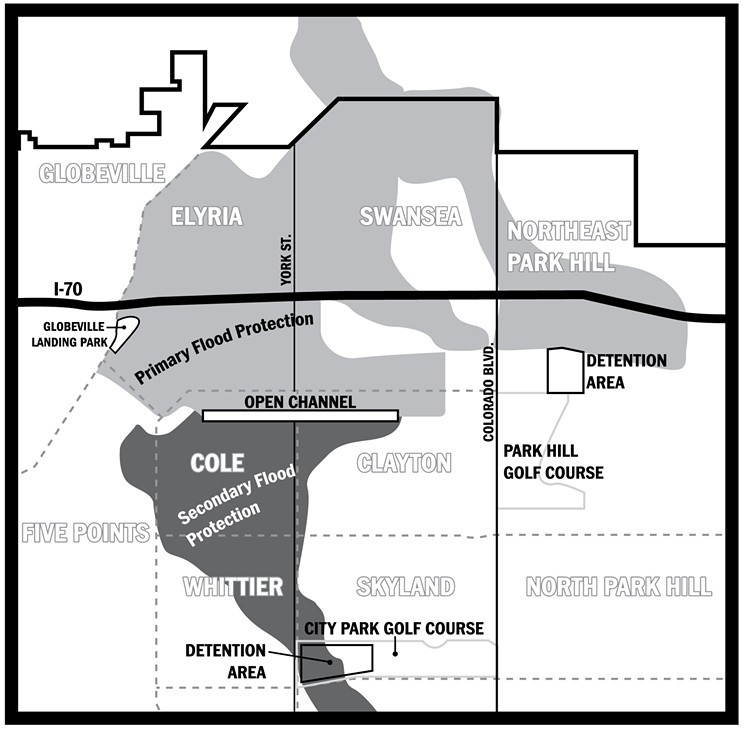 If the proposed detention pond is built on the City Park Golf Course, planners say, neighborhoods downstream will benefit — but the primary flood protection will be in the industrial area along I-70, north of the open channel on 39th Avenue.
Westword
The lawsuit over the golf course contends that the city is attempting to convert parkland for non-park uses. "Absent a popular vote, amendment of the Denver City Charter, or a change in applicable law governing designated parkland, it is unlawful," attorney Aaron Goldhamer, who brought the suit on behalf of former Colorado attorney general J.D. MacFarlane last year, said in a prepared statement. The city attorney's office has argued that other park areas have been used for stormwater detention, including City Park's own Ferril Lake.

Espinoza was one of three councilmembers who voted against the stormwater fee hike to fund Platte to Park Hill a few months ago; he was sharply critical of the previous lame-duck council's rush to approve an intergovernmental agreement with the Colorado Department of Transportation to help pay for the project, which occurred weeks before he took office. And he has taken issue with city staffers' assertions that the project is needed to address city flood-control issues, regardless of whether the highway expansion takes place or not.

"If the city is claiming that the flooding of City Park Golf Course has nothing to do with the Central 70 project, that is a direct contradiction of what council was told when the city sought approval for the fee hike," Espinoza says. "This project misappropriates the use of the public good to focus on a floodplain that directly eases the development of the I-70 ditch at the expense of a more comprehensive citywide solution."

Espinoza realizes there might be some blowback from a sitting councilmember joining a lawsuit against the city, but he doesn't expect it to affect his constituents. "There is a concern that [Mayor Michael Hancock] could direct his staff to drag their feet on matters of concern in District One," he acknowledges. "But I think he is bigger than that. I don't think it would happen. My position won't surprise anybody with Public Works. I was clear at those [stormwater fee increase] hearings about my concerns."

At a contentious recent public meeting about the I-70 expansion, which is also facing a number of challenges from "Ditch the Ditch" groups comprising nearby residents and environmental activists, CDOT executive director Shailen Bhatt affirmed the agency's intention to move ahead with the $1.2 billion project unless stopped by a court order.