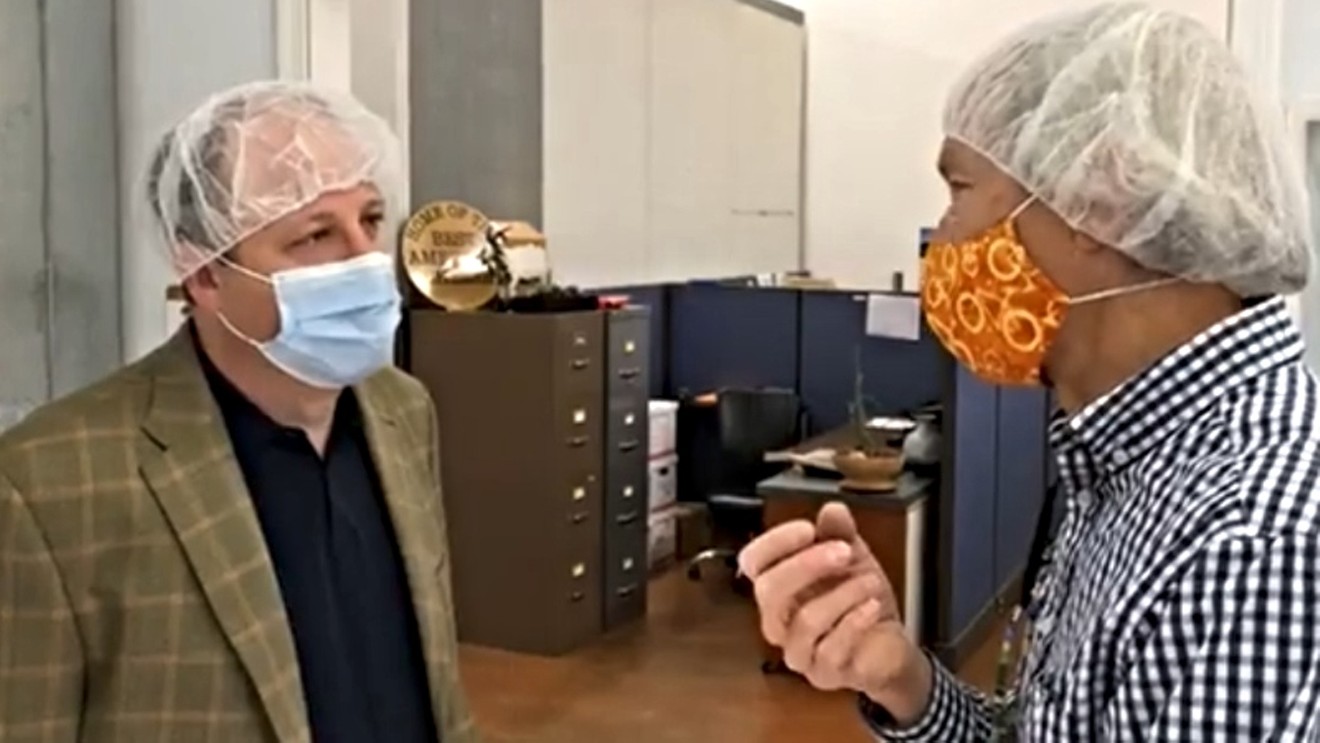 Governor Jared Polis, left, during a visit to Longmont's Haystack Mountain Creamery on September 18 prior to meeting the press. colorado.gov
During a September 18 update about the spread of COVID-19 in Colorado, Governor Jared Polis revealed that a University of Colorado Boulder testing site has a 16 percent positivity rate for cases of the novel coronavirus, a number that epitomizes safety setbacks at the school.

"That's the kind of positivity rate we see in areas with major outbreaks across the country," Polis noted from the campus of Front Range Community College in Westminster, dubbing the number "rather alarming." Boulder County's positivity rate as a whole is 4.1 percent.

So, too, was the statewide total of new COVID-19 cases as of September 18: 605, the highest in months. Again, however, the increase was attributed primarily to problems at CU Boulder, including outbreaks at five Greek houses near the campus. Earlier this week, university administrators, in cooperation with Boulder County Public Health, issued a two-week stay-at-home notice that allows students to continue attending in-person classes but otherwise establishes restrictions on most activities beyond those deemed essential.

Polis pointed out that the positivity rate for the state as a whole has been at around 2.8 percent over the past couple of weeks — not as low as it had been in August, but still well under the 5 percent threshold considered by authorities a warning sign of greater potential problems. Likewise, hospitalizations, calculated at 147 on September 18, have remained relatively stable. But cases have trended downward on only three of the past fourteen days, because of ballooning infections in they younger demographics. According to Polis, 85 percent of the new cases have involved those between the ages of 18 and 25.

Prior to his press conference, Polis and other dignitaries visited assorted sites in Boulder, Adams and Broomfield counties, mirroring recent gubernatorial tours of southeastern Colorado and the eastern plains. During their time at the microphone, guests such as Lieutenant Governor Dianne Primavera, State Representative Shannon Bird and Betsy Markey, executive director of Colorado's Office of Economic Development and International Trade, offered shout-outs to businesses and nonprofits that have received grants or loans of late, and salutes to local officials working to boost economic recovery.

Dr. Angie Paccione, the Colorado Department of Higher Education's executive director, passed along plenty of kudos as well. But she also stressed that some colleges are doing a better job than others when it comes to containing COVID-19. Thus far, only five COVID-19 infections have been reported among the state's approximately 100,000 community college attendees. Granted, these pupils don't live in congregate settings, as do the majority of students at CU Boulder — but according to Paccione, there are no current reports of the disease at Fort Lewis College in Durango, where dormitory living is part of the experience.

Paccione added that many of the COVID-19 cases involve athletes, who should be able to use the discipline that helps them excel at sports to resist the urge to attend large parties and engage in other sorts of risky behavior.

In the meantime, Boulder County Public Health has opened up two new free testing facilities in an attempt to get a handle on the disease within its jurisdiction; they include a drive-up facility at Gerald Stazio Softball Fields, 2445 Stazio Drive, and a walk-up spot at the Pleasant Street parking lot, 1205 Pleasant Street. Staffers there and with the Colorado Department of Public Health and Environment are also working hard to assess whether infections among CU Boulder students have started spreading beyond the campus — a situation that would require larger-scale action. Polis pointed out that these professionals are "watching to see if they're getting a lid on it with the college population or if this is becoming a community spread."

The answer to that question will determine the next steps in the latest Colorado challenge associated with COVID-19.

This post has been updated to note that the 16 percent positivity rate mentioned by Governor Jared Polis pertained to a single site rather than the county as a whole.
KEEP WESTWORD FREE... Since we started Westword, it has been defined as the free, independent voice of Denver, and we'd like to keep it that way. With local media under siege, it's more important than ever for us to rally support behind funding our local journalism. You can help by participating in our "I Support" program, allowing us to keep offering readers access to our incisive coverage of local news, food and culture with no paywalls.
Make a one-time donation today for as little as $1.