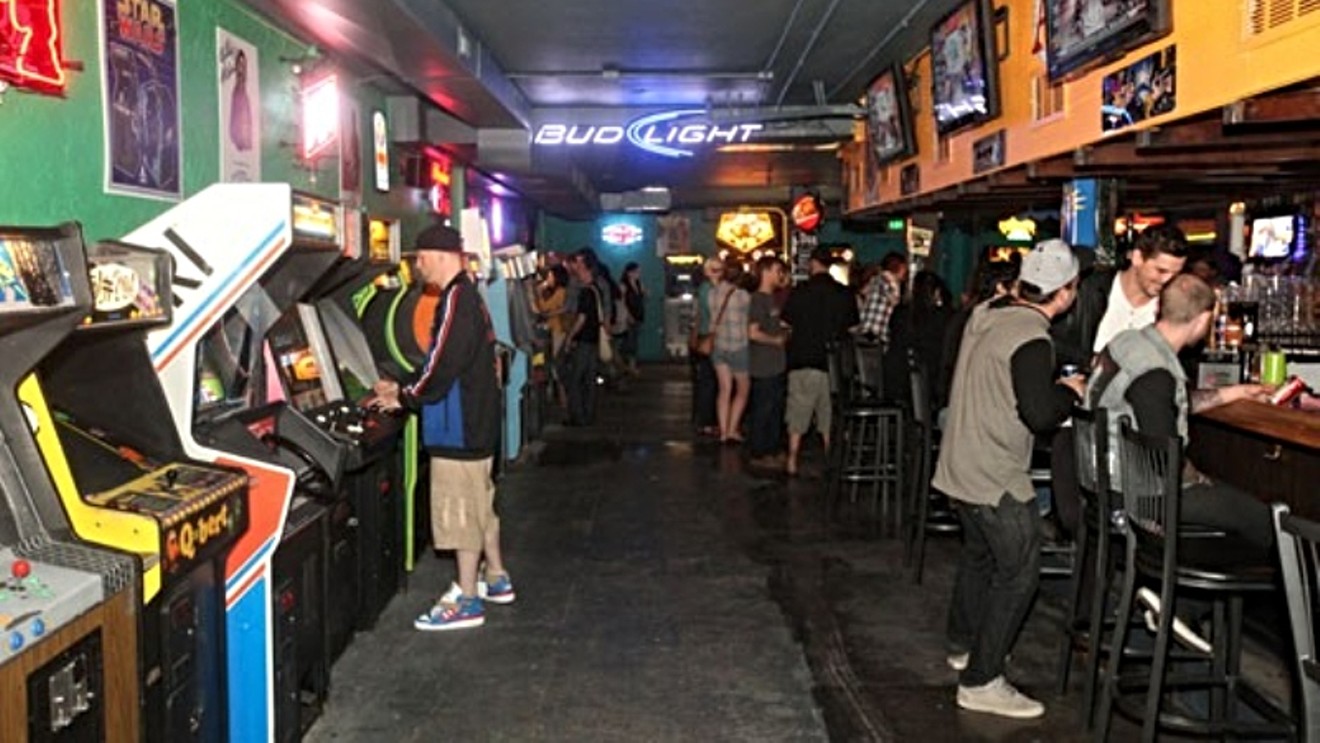 The owner of 1Up arcades is among the members of Colorado Amusement and Music Operators (CAMO). Westword photo
Bob Burnham is frustrated. The owner of Paradise Pinball & Amusement, Burnham is president of Colorado Amusement and Music Operators (CAMO), an organization recently formed to fight a de facto ban on arcade games and jukeboxes in the state's bars and restaurants, put in place as part of the attempt to stop the spread of COVID-19. Burnham is sympathetic to this goal, but he also sees an uneven application of restrictions that has put his business and others like it in danger of extinction.

"It's almost like they've attacked our industry really hard," he says. "You've got the state running lottery terminals in all these gas stations, you've got Redboxes where you can rent a video. But we can't turn on our games."

The guidance for restaurants and bars contained in Public Health Order 20-28 was updated yesterday, July 30, by the Colorado Department of Public Health and Environment. It's the ninth revision since the beginning of the pandemic, but the document still contains a passage that essentially puts the kibosh on video and pinball games, jukeboxes and the like. It reads: "Provide appropriate signs or markings within the Restaurant or Bar to space lines, indicate which tables are unavailable, prohibit games and dance floors that encourage gatherings, and direct foot traffic."

A CDPHE spokesperson, corresponding via email, explains the rationale for the rule in simple terms: "Jukeboxes, pinball machines and video games are high-touch surfaces, and the likelihood of mingling of non-household contacts while engaging in these activities is high."

The same is true for a wide variety of devices used in casinos — a contradiction noted in a recent Westword interview with Jourdan Adler, owner of three 1Up Arcade and Bar locations in the state and a member of CAMO.

The organization was launched in April, in large part because of the devastating economic impact of COVID-19 on operators and restaurateurs alike. "We're really a huge part of their income," Burnham points out. "They may not make a bunch of money off our games, but they're bringing people in. They're playing the jukebox and eating dinner, they're letting their kids to play games so they can sit and talk. We're a big piece of the puzzle — and we're saying that if you're allowing the restaurants to stay open, allow us to open our games. Give us a chance. We'll take care of them and clean them as best we can."

Indeed, CAMO has developed a roster of protocols intended to make gaming safe in the current environment. "We're offering to put up signs that say, 'Hey, please maintain social distancing,' provide hand sanitizer by the games so people can clean their hands after they play and bottles with cleaners to wipe the joysticks down after they're done," Burnham notes. "And we're actually planning on keeping the games spaced six feet apart for social distancing."

Although CAMO members have presented these suggestions to state public-health officials, Burnham says they've gotten nowhere — although the CDPHE representative stresses a willingness to listen. "We review stakeholder input and emerging scientific information regularly and update our guidance accordingly," the spokesperson says. "We welcome ongoing conversations with all stakeholders on ways to improve our guidelines to protect public health while maximizing economic activity."

The rep adds: "We make every effort to collaborate with local public health agencies and counties to help them comply with the state’s public health orders while considering the unique industries, attractions and conditions that exist throughout our state. We are deliberate with each decision, making data-driven decisions that can help Colorado move forward economically while suppressing the virus."

From Burnham's perspective, though, time is running short.

"If things don't change soon, we'll have to pull a lot of our equipment out of restaurants and bars," he says, "and our warehouses are already full because a lot of places are closing and aren't going to reopen. We're really getting desperate. They're killing an industry and a lot of businesses."
KEEP WESTWORD FREE... Since we started Westword, it has been defined as the free, independent voice of Denver, and we'd like to keep it that way. With local media under siege, it's more important than ever for us to rally support behind funding our local journalism. You can help by participating in our "I Support" program, allowing us to keep offering readers access to our incisive coverage of local news, food and culture with no paywalls.
Make a one-time donation today for as little as $1.