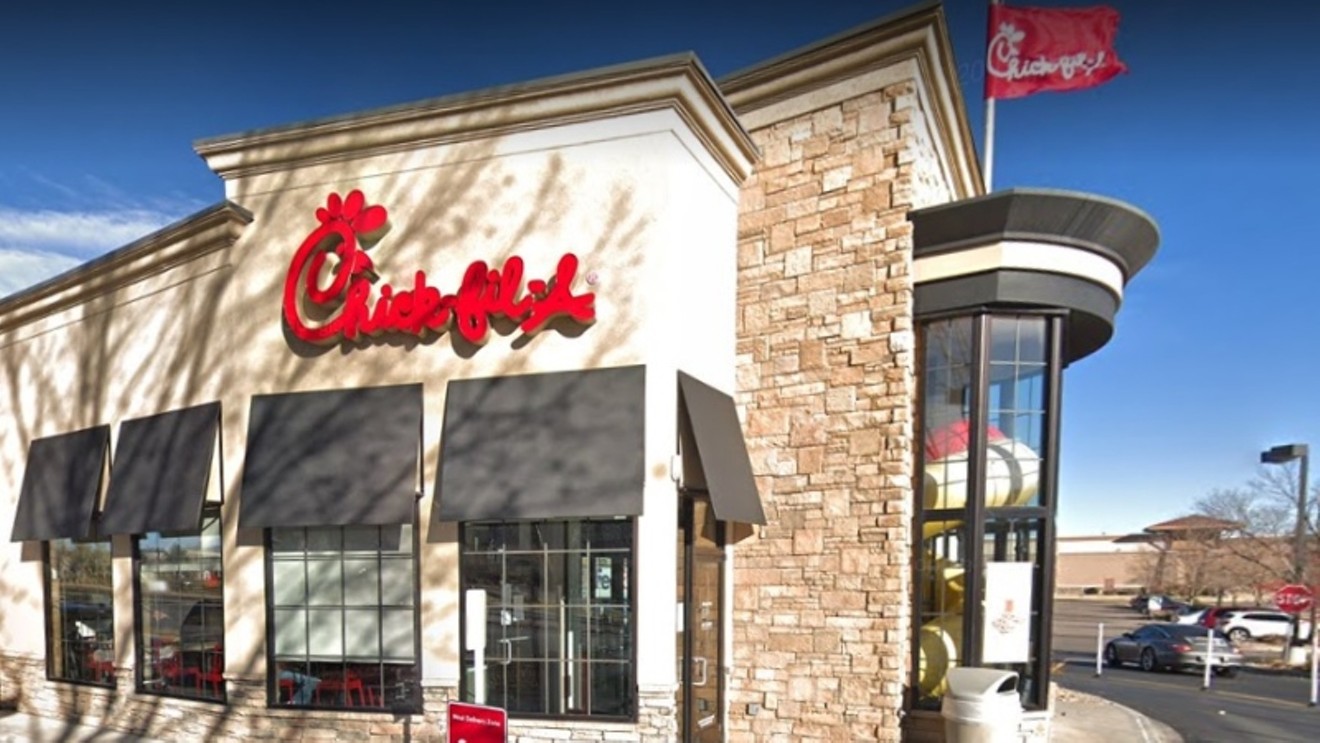 Thus far, the Colorado Department of Public Health and Environment has declared six Chick-fil-A outlets to be outbreaks. No other restaurant company comes close to that total, including major fast-food competitors. Two outbreaks have been declared at McDonald's outlets; Panda Express, Arby's, Culver's and Jack in the Box account for one each; and prominent outfits such as Burger King, Wendy's, Taco Bell and many others have dodged the viral bullet in Colorado thus far.

The CDPHE considers a facility an outbreak after two or more COVID-19 cases among residents, staffers or the like are confirmed within a fourteen-day period, or two or more cases of respiratory illness with an onset of symptoms within a fourteen-day period are paired with at least one additional COVID-19 diagnosis. Here's the department's list of Chick-fil-A locations that qualify under this standard:

Cumulatively, 28 staffers at these sites tested positive for COVID-19, while twenty others have probable cases. The investigations at the Fort Collins, Federal Heights and Littleton restaurants are designated as resolved in the most recent CDPHE outbreaks report, issued on July 15, while the other three were marked active.

We reached out to Chick-fil-A's corporate headquarters in College Park, Georgia, to ask a number of questions about the chain's COVID-19 challenges in Colorado. Among the most important: Why do you think so many Chick-fil-A restaurants have become outbreaks? Have you re-examined policies and procedures in light of the multiple outbreaks here? If so, have you instituted any changes to make the venues safer for employees and customers, and what are they?

Unfortunately, the company didn't address any of these specific queries, choosing instead to issue a single statement: "Our highest priority is the health and well-being of our Team Members and Guests. If a Team Member is diagnosed with COVID-19, the restaurant initiates the response protocol and takes precautionary measures, including disinfecting and deep cleaning the restaurant. Safe service is our top priority and our restaurants continue to follow CDC and local health department guidelines."

The Chick-fil-A communication team also sent links to pages on its website related to the chain's general COVID-19 procedures and safety precautions being taken at restaurants in general. The latter links to an article on The Chicken Wire, an online public-relations effort that describes itself as providing "visually rich stories, company news and behind-the-scenes access to our culture, history, partnerships and initiatives." But given that the piece is dated May 6, it's not exactly responsive to the Colorado outbreaks, all of which were declared after its publication.

The next outbreak report will be released later today, July 22.
KEEP WESTWORD FREE... Since we started Westword, it has been defined as the free, independent voice of Denver, and we'd like to keep it that way. With local media under siege, it's more important than ever for us to rally support behind funding our local journalism. You can help by participating in our "I Support" program, allowing us to keep offering readers access to our incisive coverage of local news, food and culture with no paywalls.
Make a one-time donation today for as little as $1.