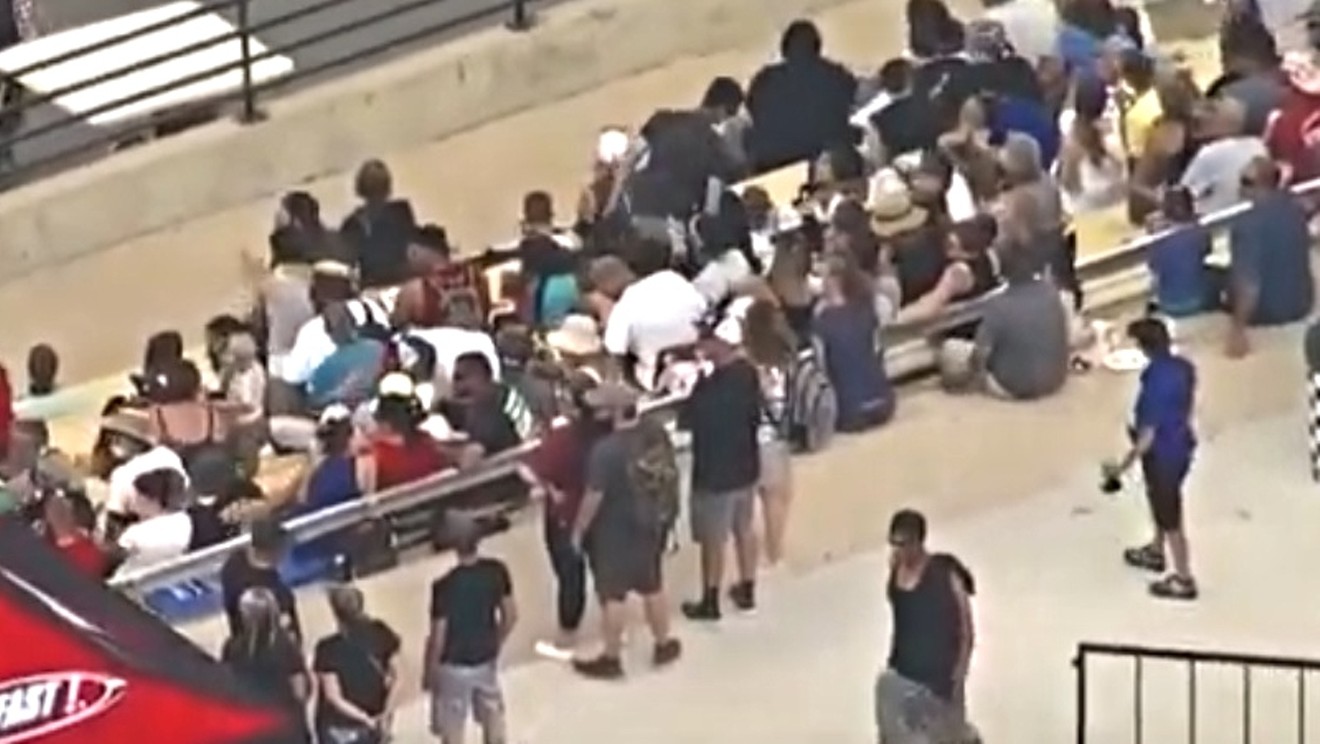 Part of the crowd at a July 4 fireworks spectacular at Bandimere Speedway in Jefferson County. CBS4 via YouTube
Do people who contract COVID-19 always tell the truth about where they caught the disease? That's a question being asked with increasing frequency, especially in the context of large events viewed with alarm by public health agencies in Colorado.

Case in point: the July 4 fireworks extravaganza and patriotic rally at Jefferson County's Bandimere Speedway. More than 7,000 people attended the gathering, where social distancing was spotty and the use of facial coverings ultra-rare — so much so that Jeffco took racetrack namesake John Bandimere Jr. and his family ownership group to court over the episode, a move that created an enormous backlash against Jeffco officials, as confirmed in a July 24 statement from Jefferson County Public Health that acknowledged "frustration from community members, expressed through emails, social media and in the media" and groused about "inaccurate claims that events have been 'canceled by JCPH.'"

In the end, the agency, whose request for a preliminary injunction against the Bandimeres had already been rebuffed, reached an agreement that will allow new events at the racetrack to take place. Particulars of the pact, announced yesterday, July 28, include mandatory mask wearing for anyone over ten years of age and attendance restrictions of 150 people in each of several pit stop areas, as opposed to the previous limit of 175 people for the entire arena. The rules will be in place for the "Take It to the Track" Test & Tune event happening today, July 29; gates open at 4 p.m. and admission is $35.

In the meantime, though, observers have been waiting to see if the packed July 4 show led to an outbreak of COVID-19, with those expressing doubts including KNUS radio personality and attorney Randy Corporon, who represents the racetrack. He told Westword that he'd seen no reports of infections associated with a Mother's Day gathering at another one of his clients, C&C Breakfast and Korean Kitchen in Castle Rock, which was captured in a viral video and denounced by Colorado Governor Jared Polis — and he was certain that had there been any, the cases would have been well-publicized. (C&C's owners, who filed a lawsuit over the restaurant's temporary shutdown, announced the permanent closure of the Castle Rock location this week.) Corporon added that he'd be watching closely to see if a rash of cases was tied to the Bandimere gathering, but said he doubted there would be.

He's right so far, at least officially. Had a sudden positive-case upswing been generated by the Fourth of July spectacular, it would have been expected to turn up around two weeks later. But according to Jefferson County Public Health spokesperson Nicole Work, corresponding via email, "We checked with the team and there was one person who told us they were at Bandimere at the time they could have become infected with COVID-19." To become an official outbreak, a minimum of two people must test positive.

The event could still earn this designation since, as Work notes, "We are seeing lab reporting delays — results are sometimes taking up to ten days to be reported to local public health agencies. Our team is looking for any hot spots and commonalities related to our county's recent spike in cases, but we do not have that data yet." (Even so, the rise was worrisome enough that this week, Jeffco issued an enhanced mask order that includes usage outdoors.)

"This has been very difficult to track for a number of reasons," Work continues. "Identifying these cases relies on individuals being willing to share their potential exposure information with us, and that has been an increasing challenge."

It's not difficult to read between those lines — and indeed, during his July 28 press conference, Governor Jared Polis described contact tracing as "soft data," since it only provides "some sense of where did they get it, who got it from them and who they were exposed to."

And that sense can get even softer if politics gives people an incentive not to tell the truth.
KEEP WESTWORD FREE... Since we started Westword, it has been defined as the free, independent voice of Denver, and we'd like to keep it that way. With local media under siege, it's more important than ever for us to rally support behind funding our local journalism. You can help by participating in our "I Support" program, allowing us to keep offering readers access to our incisive coverage of local news, food and culture with no paywalls.
Make a one-time donation today for as little as $1.