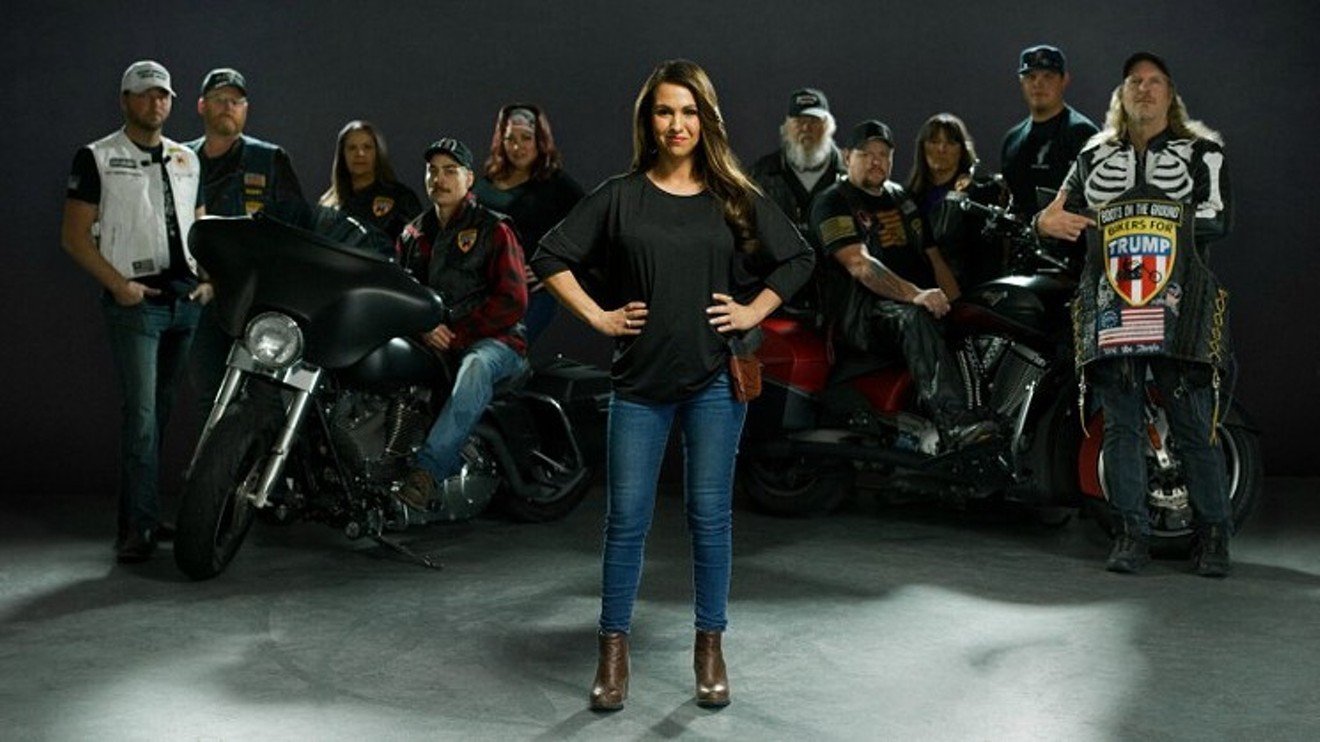 Lauren Boebert with members of Colorado Boots on the Ground Bikers for Trump, whose members were among the earliest customers at the reopened Shooters Grill. laurenforcolorado.com
Video of a packed May 10 Mother's Day crowd at Castle Rock's C&C Coffee and Kitchen, which opened its dining room despite a COVID-19 public-health mandate against on-site service, prompted Colorado Governor Jared Polis to temporarily yank its license and publicly lecture restaurateurs thinking about doing likewise.

But Shooters Grill in Rifle was already open for business, having unlocked its doors on Saturday, May 9, and it continues to operate despite a cease-and-desist order delivered by the Garfield County Sheriff's Office. Co-owner Lauren Boebert stressed that she has no plans to shut down unless authorities force her to do so.

"I am for personal responsibility," Boebert explained, "and for me and my business and my employees and my customers, this feels like the most reasonable way we can open."

Boebert is by far the most high-profile person in Colorado to take such a stand. Shooters Grill has attracted nationwide attention because its waitstaff is strapped, openly carrying sidearms. Moreover, Boebert is running for Congress against incumbent Scott Tipton, who she feels hasn't advocated forcefully enough for the conservative agenda he's supposed to support.

But unlike C&C on that wild Sunday, Shooters is taking precautions. "We're following CDC [Centers for Disease Control and Prevention] guidelines, as we have throughout this entire process," Boebert noted, and that includes limiting the number of diners in the restaurant at any time and deploying rigorous hygienic measures.

Maybe that's why Shooters hasn't been shuttered yet — though its immediate future is uncertain. When we spoke to Boebert on the afternoon of May 13, the eatery was bustling. But at 4:05 a.m. today, May 14, she offered a Facebook account of a visit from a Garfield County commissioner during which she was allegedly "berated" for causing a mutiny among other local restaurant owners, raising the chances of action against her. (That post is on view below.)

In conversation with Westword, Boebert made it clear that she reopened only after careful consideration.

"I had complied with the governor's executive order," she says. "And after he decided to extend it, my county commissioners led me to believe they had submitted the same variance as Mesa County," which asked for and received permission from the state to open restaurants early as long as the businesses did so on a safe and limited basis because of the county's low virus rate — 34 cases per 100,000 people, as opposed to Garfield County's 176 per 100,000 (see our update on Colorado COVID-19 hot spots).

"I was patiently waiting for them to get that variance approved," Boebert continued. "Then, on May 4, we started to see restrictions lifting in Colorado on certain businesses. Restaurants weren't included in that, but boutiques and salons and many others were able to serve customers inside. And that's when I learned Garfield County commissioners had not submitted their variance. So I went through proper channels. I talked to the City of Rifle about blocking off parking spaces in front of the restaurant so we could serve people, but they wouldn't give me permission. I also talked to Garfield County Public Health, the chief of police and the sheriff, and I tried to connect with the Garfield County commissioners, but to no avail. They didn't answer their phones or respond to emails."

A portrait of Lauren Boebert wearing her sidearm.
laurenforcolorado.com
At that point, she maintained, "I had exhausted all these measures to see about getting these restrictions  lifted...and even though we've been doing curbside pick-up and delivery orders, this would have been the first payday my employees wouldn't have received a check if I didn't do something dramatic. So I made what I feel is a very reasonable decision."

The rules she imposed for dine-in service are stringent, she emphasized: "We're only open to 30 percent capacity, and we're doing social distancing. We've taped off some tables to make it clear they're not available, so there are no accidents. And my waitresses are wearing masks when they're in close contact with customers and gloves while serving food. Also, we don't have our caddies on the table: Instead of leaving condiments, they're provided to customers as needed and sanitized after they're used. And we sanitize the booths and tables and everything after every use."

She added: "We had the potential to be at 100 percent capacity, but we made the decision not to be, and our customers have been very gracious and respectful of that decision, and very patient. They still supported us, and that's why I decided to open — once our leaders showed they weren't leading. There was no urgency with public health and with our county commissioners to get our county up and going again. This is economic suicide, and the data that's out doesn't justify small-business owners losing their businesses. Garfield has had two deaths, and one was from somebody who transferred in from another county. So one resident lost their life, which is tragic — but I-70 sees hundreds of lives lost each year and we don't shut down our city for that."

Neither is she flaunting best practices: "Walmart serves food, and they're able to service customers because they have lobbyists in D.C. lobbying for them. I don't have a lobbyist lobbying for me, but I don't believe it's unreasonable for me to have somebody come and sit at my nice, clean, sanitized restaurant and have a meal for twenty minutes when they can go to Walmart, which is absolutely packed and they don't have the control to keep things as clean as we do."

This sequence of events has only cemented the rationale for her congressional run, Boebert confirmed. "I do not see our leaders standing for freedom, but I see a whole lot of them giving it away... I understand that some people who may have been supporting me through this won't like my decision and will see it as defiance against the government. But we do not see our elected officials taking a stand for the people — and that's why I stepped up to begin with. This is nothing out of the ordinary. It's what I've been doing for years: advocating for freedom and limited government, and begging and pleading our elected officials to take a stand for us."

Boebert has no beef with local law enforcement. "I don't envy the position they're in, nor do they envy mine," she said. "I've been very cordial and respectful to all of them, and I just hope we can get through this quickly and that we can lift some of these restrictions soon. These business owners are their friends, the people who keep this community going, and they don't want them to suffer. But this is a perfect example of the government choosing winners and losers, and I feel that needs to be taken care of. The government shouldn't be choosing which businesses survive and which ones die."


I am being responsible in my approach, I've tried all of the proper channels, but ultimately I had to do what's best for my employees and my family. I don't have grocery store and Walmart D.C. lobbyists, but I serve food just like they do and I need to be open using reasonable safety precautions.

Now: Which poison do I take?

"Fall in line" and abide by an arbitrary re-open date? Suspend dine in services only to return to a slow financially forced closing?

Or continue to operate reasonably at 30% capacity, following GCPH’s procedures and lose my food service license.

Either way, I lose the business I have spent seven years building and my employees are out of work. So much energy has been put into preventing this scenario for months.

My question is, what happens to the next business owner? If I don’t stand now, who will? When?

Our county commissioners led us to believe a variance to re-open sooner than the governor’s order was submitted weeks ago. I waited. It was not submitted until this week. By then I had faced a decision to make to ensure my employees were able to receive a pay check.

One commissioner came to my restaurant, not to offer support, but rather berate me. He says if Garfield does not open its my fault. That our county government would be neutralized and the state would take over. Not far from what we are currently experiencing, from my viewpoint.

I was informed that seven other restaurants were telling him they were opening and he blamed my model they were looking to. I wish he had a model for them to look to as I know they are facing the most desperate of times.

What would you do?