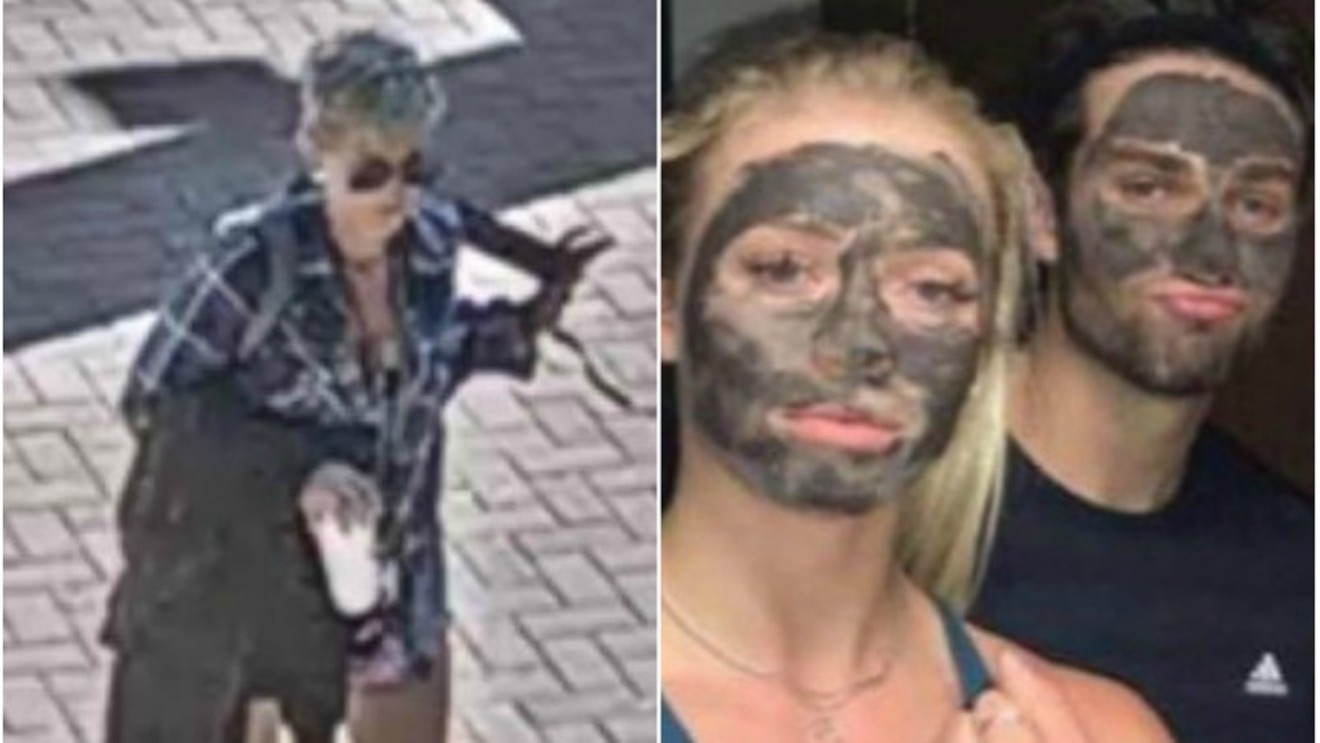 A surveillance image of the woman in the racist video shared by CU Boulder Police and a photo of CSU students wearing blackface that went viral last month. CU Boulder Police Twitter/Social media via NBC News
Editor's note: Rebekah Krajacic, 33, the woman authorities believe used racial epithets in an incident on the CU Boulder campus on October 6, was arrested on October 11 on suspicion of misdemeanor harassment. Continue for our previous coverage.

Mark Kennedy, whose confirmation as the University of Colorado's latest president this past spring was particularly bruising, is facing his first major public-relations crisis: how to deal with an on-campus racial uproar stirred by a video in which a young white woman calls an African-American student a "fucking nigger."

Such scenarios are rife with pitfalls, as administrators at Colorado State University learned last month, after fumbling the fallout from a viral photo in which four white CSU students wore blackface and struck a pose that would have been familiar to fans of the Marvel movie Black Panther even if the image hadn't been emblazoned with the slogan "Wakanda Forever."

In contrast, the approach that Kennedy and CU as a whole are taking to the N-word video thus far follows the 21st-century media playbook to the letter. Assorted parties associated with the university have issued expressions of concern via social-media outlets and other platforms while avoiding forums such as interviews, where a slip of the tongue can turn into a PR nightmare.

It's called controlling the message, and organizations and individuals that see the video as emblematic of greater problems at the university are taking a similar tack. Westword has repeatedly asked to speak with folks on both sides of this explosive subject over the past 24 hours, including the target of the young woman's wrath, whose name we're not sharing at this time because he has not expressly given us permission to do so.

Not that there's a shortage of words in this controversy. There are scads of them, as you'll see. But they're all statements, not exchanges.

The video captures a verbal dust-up that took place on October 6 at CU Boulder's engineering center. The person who originally shared it has identified himself as a friend of the victim. He also posted the friend's account of the events leading up to the clip:


We walked into a study area where we come almost every Sunday. We walked into the hall and looked into the room we usually study in because the lights were off, so we looked in and saw her. After we saw her we turned to the room adjacent because nobody was in that one. We have never met this or seen this woman before in our lives. However, she profiled one of us as being part of a group of black men that have been "stalking her." She kept looking into our room and one of us asked why she was looking at us. She said because she assumed he had been stalking her for no other reason besides his skin color and that we needed to leave her alone (even though we were studying in the same place we always study in every Sunday.) We eventually are able to sit back in our room for a couple minutes until she packed up to leave and threatened to call the police and that's where the video starts.


The original video tweet was accompanied by a strong message: "racism will not be tolerated. being black is not a crime. @CUBoulder do something about it." Among those retweeting it was Eric Rozner, an assistant professor of computer science, who wrote: "Today I was involved in an ugly incident at work. I'm retweeting to (i) raise awareness of racism, which unfortunately still exists today even on college campuses in liberal cities, and (ii) allow others to think about how to intervene with racist behavior when encountered.... I haven't received training or thought about how to deal with such situations. On the fly, my intuition was to separate, deescalate, and then check on the students. I have to regrettably say that I did not call campus police immediately afterwards (although I have since spoken).... If anyone has advice on how to handle these situations and how to ensure I've met the needs of the students, please let me know. I have reached out to the students involved since. I can't image what they are going through. I feel so bad for them."

When contacted by Westword, Rozner referred questions to Phil Larson, assistant dean and chief of staff at the CU Boulder College of Engineering and Applied Science. In turn, Larson referenced remarks offered on social media by Dean of Engineering Bobby Braun ("There is no place in our society for this woman’s repugnant language or behavior. This unacceptable incident will be investigated thoroughly") and Kennedy, who wrote:


I understand a verbal altercation occurred at CU Boulder between students that included racially hostile language. I support the chancellor and the Office of Institutional Equity & Compliance in immediately launching an investigation to determine what transpired. We will learn more in the next few days, but I want to be clear in unequivocally condemning racist and threatening behaviors. Across all of its campuses, CU must support learning and working environments that foster respect for all students, faculty and staff.

This salvo was supplemented by a two-front attack: a letter from Chancellor Phil DiStefano that appears at the bottom of this post, and an October 7 alert from the CU Boulder Police Department calling for the public's help in identifying the young woman, described as "a person of interest in this case." The release added that "she is a white female, approximately 5’3” to 5’5” tall and 130 to 140 pounds, with short blond hair. We do not believe that she is affiliated with CU Boulder. CUPD officers believe she is the same woman they found camping on campus last month, in violation of CU policy."

The implication that the woman isn't a Boulder student allowed the university to distance itself from charges of systemic racism — and it turned out to be true. This morning, the CU Police identified the woman in question as Rebekah Krajacic, 33, and emphasized that "she is not affiliated with the CU Boulder campus." There's no mention of an arrest, but the department divulges that it's received reports from others who've had "negative interactions" with Krajacic and urges such individuals to contact the police at 303-492-6666.

This investigation has demonstrated action in ways that weren't evident in CSU's handling of the blackface controversy. CSU president Joyce McConnell, who's also new to her gig, publicly said she couldn't punish the quartet in the Wakanda pic because "personal social media accounts are not under our jurisdiction," meaning that students "can generally post whatever they wish to post on their personal online accounts in accordance with their First Amendment rights." Given that, McConnell's pledge to enact a "Race, Bias and Equity Initiative" as a way of promoting greater tolerance at the university was widely seen as ineffectual — and she was also blasted by the four students, who complained that CSU had essentially dubbed them racists without contacting them to see why they'd posed for the photo in the first place; they've offered various explanations for why they feel their behavior shouldn't have been judged as harshly as it was.

Meanwhile, the aforementioned CU Boulder Black Student Alliance has issued a five-prong demand to Kennedy's administration that includes a now-outdated call for the female to be expelled, as well as new programs designed to address racial profiling and more. Read it here:

This is our official statement. - @ftzgrld #blacklivesmatter

How CU responds to this manifesto, and whether the alliance or the student attacked for the color of his skin choose to speak about what happened, will help determine if the video becomes a lingering stain on the university or fades into the background. But so far, the reaction by Kennedy has been cautious, measured and politically correct in ways that many of his critics during the confirmation process may not have expected.

Here's the letter from the chancellor.

On Sunday, an act of racism occurred at our Engineering Center. This incident, in which bigoted language was directed at our students, was absolutely unacceptable.

I cannot state this strongly enough — racist behavior is offensive to our campus values and will not be tolerated. The CU Police Department is investigating and searching for the person who committed this racist act, who will be held accountable to the fullest extent possible. While we don’t believe she is affiliated with our campus, her actions are just as insulting to our values.

This incident reminds us of who we are as a campus community and the need for us to be vigilant in defending our values — and each other — on a daily basis. We are committed to an increasingly inclusive campus culture built upon the values of our Colorado Creed, and incidents like yesterday’s reinforce the difficult work we have yet to do.

We are working with campus and student leaders to prioritize next steps to address yesterday’s incident and improve upon our policies, trainings and resources for our campus community to reject intolerance and racism wherever they exist.

We must always be ready to look out for and care for ourselves and each other. A wealth of campus resources are available to support our students and other members of our campus community who are feeling the effects of yesterday’s incident, and I hope you will use them.

Updates will be published in CU Boulder Today as soon as they are available, and we look forward to demonstrating to the world what CU Boulder stands for and how we stand together as a community.

Update:This post has been updated to include the CU Police's identification of the woman in the video, who is not a student.
KEEP WESTWORD FREE... Since we started Westword, it has been defined as the free, independent voice of Denver, and we'd like to keep it that way. With local media under siege, it's more important than ever for us to rally support behind funding our local journalism. You can help by participating in our "I Support" program, allowing us to keep offering readers access to our incisive coverage of local news, food and culture with no paywalls.
Make a one-time donation today for as little as $1.