This Article About Stopping Clickbait Isn't Clickbait. We Promise.

Stop Clickbait founder Daniel Tuttle is an advertising major at CU Boulder who says he hates ads. Stop Clickbait
Two years ago, a University of Colorado Boulder student identified one of the worst problems on the Internet. What he did to solve it will shock you.

Okay, maybe not so much. Admittedly, those opening lines are part of the problem that Daniel Tuttle is trying to solve.

Tuttle is the founder of Stop Clickbait, an entirely volunteer-based online organization dedicated to “making the Internet a better place.” Its stated mission: “We click so you don’t have to.”

The Stop Clickbait Facebook page, which has over 200,000 followers, re-posts screenshots of clickbait articles with short, sometimes hilarious, summaries of the articles’ content, which alleviate the need to click on the ever-enticing links. To do its work, Stop Clickbait leverages a team of over 100 volunteers worldwide, who have merrily agreed to spend their free time rummaging through the bowels of the Internet to find, read and expose twelve different categories of clickbait, ranging from flashy world news headlines that turn out to be not-so-newsy, to purported revolutionary lifestyle hacks that turn out to be painfully obvious common-sense advice. The "tiger" was actually a raccoon. Did ABC News really need to report that?
Stop Clickbait
We can probably all agree that clickbait is, at the very least, annoying. But it’s gone from being perceived as somewhat benign to almost akin to fake news. Stop Clickbait goes so far as to claim that clickbait is unethical, greedy and manipulative. Yet “clickbait” is also a pejorative that readers seem to throw at any article they don’t like. So what is clickbait, and what’s so bad about it?

“In a broad sense,” Tuttle explains, “it’s anything that’s sole purpose is for you to click on. It’s designed to get ad revenue.”

Tuttle says that clickbait generally employs a “sensationalist” headline that exaggerates the importance, shock factor, cuteness or humorousness of what actually happened. These headlines are often slightly misleading, and they often withhold key information to the story. Thus, when posted to social media, clickbait piques viewers’ curiosity to get them to click, which in turn gets an online platform a couple of cents in ad revenue — but, for the reader, often results in a disappointing dearth of actual information and substance.

Clickbait is a relatively new phenomenon that Tuttle thinks started because of the way social-media platforms now essentially act as publishers. According to him, Facebook and similar platforms promise an open exchange in which any media website can post their content for free, which seems like great news for journalism and other mediums designed to inform, educate and enrich their audience’s lives. 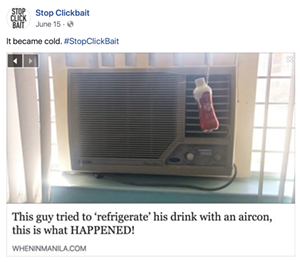 Needles exaggeration in a headline is a key feature of clickbait, according to Tuttle.
Stop Clickbait
But that system has an unintended consequence: Media companies don’t make any money from posting their articles directly on Facebook, no matter how many people see them. Instead, they generate ad revenue based on how many clicks they draw to their own websites. As one recent headline from the Onion sarcastically read, “We Don’t Make Any Money If You Don’t Click the Fucking Link.” This phenomenon incentivizes sites to create headlines and posts designed to get more clicks rather than directly inform their readers.

Clickbait is an especially popular moneymaking device for sites that publish less serious content that concentrates on the fun facts of everyday life, such as BuzzFeed, Bored Panda and I Fucking Love Science. But they aren’t the only culprits: Tuttle accuses more mainstream journalistic outlets like Time and the Huffington Post of being “big-name offenders.”

Tuttle, now a rising senior at CU, is an advertising major who says he hates ads. “My entire life I’ve been interested in the Internet, and focused around it and seeing how ad revenue works,” he says. “I’ve become very cynical about advertising and wanted to do something with the Internet, because the power of the Internet is vast and exciting and constantly changing.”

Tuttle created the Stop Clickbait page in May 2016. He was genuinely shocked — not just in a clickbait way — by the Internet’s response. Within a few days, there was a viral Reddit post that brought almost 15,000 likes to the page. Soon, he put out calls for volunteers to help him sort through clickbait, create graphic design, analyze Facebook algorithms and market the page. He says he was flooded with applications from people who wanted to help.

Stop Clickbait says you don't need to click on a link and read a whole article to answer this question.
Stop Clickbait
“People love it,” Tuttle says. Reviews on Stop Clickbait’s Facebook page call the clickbait-stoppers “the unsung heroes of the Internet.” Tuttle explains, “I think the idea [is that] we’re going against the economy of the Internet — the way it depends on ad revenue, all based on clicks. It’s literally the opposite of doing what everyone else is doing.”

Now, Stop Clickbait operates in ten different countries, and according to Tuttle, their posts have been viewed more than 200 million times. “All I can say is, that’s a lot of clicks saved,” Tuttle says.

Hundreds of millions of clicks saved — that’s a heady claim. But considering that Stop Clickbait has no way to know if people who view their posts would have actually seen and clicked on the original article, doesn’t it seem a bit exaggerated — maybe even (gasp) clickbait-y?

Tuttle has an answer to that: “Our mission is not just peeling clicks, but educating the public on how to become media literate,” he says. In that sense, the number of clicks “saved” from a specific clickbait article matters less than the goal of helping Facebook users better recognize clickbait and save their clicks on their own.

And, Tuttle explains, Stop Clickbait is also working on several measures that do stop individual clickbait from going viral. One is encouraging people to use the hashtag #StopClickbait on individual pages, to let anyone who sees it know its nefarious true purpose. Another is a browser extension that would allow clickbait-stoppers to post their own “reveal,” which would show up just below the post for any other users who have the app.

Above all, Tuttle’s goal is to make people aware of the perils of clickbait, and thus “challenge media outlets and content-sharing pages to generate better headlines and click-worthy content without deceptive or manipulative descriptions.” His advice for journalists? “Ask yourself, ‘Am I leaving key info out to make people click?’ And if you aren’t leaving anything out on purpose but you still think people wouldn’t click on that, that’s not a good article.”
KEEP WESTWORD FREE... Since we started Westword, it has been defined as the free, independent voice of Denver, and we'd like to keep it that way. With local media under siege, it's more important than ever for us to rally support behind funding our local journalism. You can help by participating in our "I Support" program, allowing us to keep offering readers access to our incisive coverage of local news, food and culture with no paywalls.
Make a one-time donation today for as little as $1.