"There is no better term that defines this process than one we are very familiar with: 'rigged,'" stated Mario Carrera, CLLARO's president and CEO. "This was a rigged appointment from the beginning. The public should be seriously concerned with a board that is willing to carry on with a process that was biased and unfair."

Similar insults were lobbed at CU in April 2019, when the Republican-dominated board advanced Kennedy — a onetime businessman and former Republican member of Congress who was then the University of North Dakota's president — as the sole finalist to take over where Bruce Benson had left off.

As detailed in "Why So Many People Hate the Idea of Mark Kennedy as Next CU President," plenty of CU stakeholders lined up against the nominee, owing largely to a congressional voting record described by United Mexican American Students y Movimiento Estudiantil Chincanx de Aztlán and CU Young Democratic Socialists of America, two groups that sponsored a rally protesting the development, as "anti-queer, anti-union, anti-abortion, anti-immigration, anti-public education, anti-environment, anti-Palestine, anti-science, anti-civil rights."

An "Open Letter to the Regents of the University of Colorado," written collaboratively by a group that included assorted faculty members, made many of the same points, albeit with more polite language. "Mr. Kennedy appears to be a divisive administrator with troubled relations to the public and to the media — not someone who would maintain CU’s academic rankings and public image, or bring together our diverse students, staff and faculty," it stated.

Such concerns fell on deaf ears, and while Kennedy tried to mend fences after taking the job — as evidenced by an extensive Westword Q&A published that July — he continued to be viewed as an extremely conservative force in a system whose flagship institution, CU Boulder, is rightly viewed as one of the most liberal universities in the country.

When Democrats regained control of the board in the November 2020 election, Kennedy instantly became a short-timer. In May 2021, the board approved a $1.3 million settlement to make him go away by an 8-1 vote. 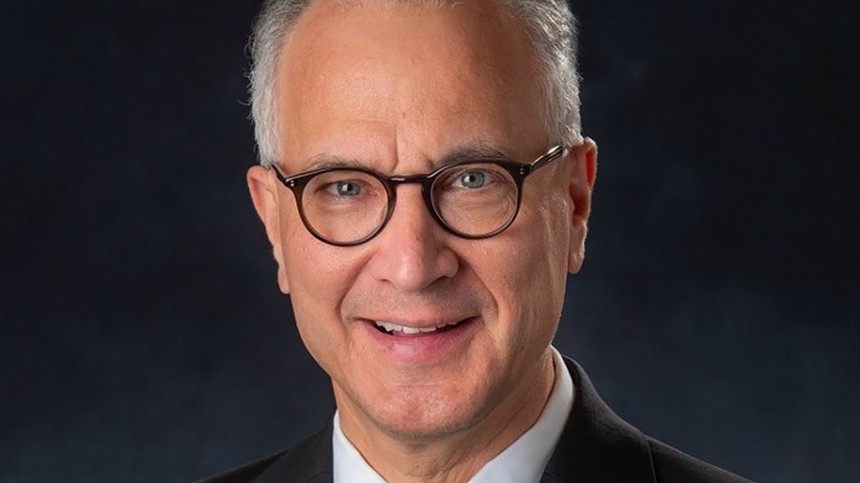 Mark Kennedy's official exit date at the University of Colorado was July 1, 2021.
University of Colorado
The following July, Saliman took over as interim president, and his CU bio shows why he was perceived to be a safe choice to fill in prior to the regents choosing a full-timer for the gig. Raised in Littleton, he's described as "a lifelong Coloradan and proud CU alumnus" who graduated from the university's flagship Boulder campus with a degree in political science. Just as important, he was already in-house as CU's senior vice president for strategy, government relations and chief financial officer.

"Saliman was instrumental in transforming CU’s budgeting process to make it more efficient, transparent and easily understood," the bio states. "His efforts have helped enable the Board of Regents to keep tuition in check while making informed decisions that allow CU to thrive."

According to CLLARO, however, Saliman was supposed to be a caretaker rather than a candidate to fill the gap left by Kennedy's departure. The organization points out that his original contract stated: "Todd will not apply for the position of president, but will aid the search process for the next president and the transition process." But last September, the contract was amended to allow Saliman to throw his hat into the ring "for reasons which have never been made public," CLLARO contends. By doing so "after the search firm Storbeck Search had been hired and the search committee had its first meeting in mid-December," Saliman gained an advantage over all the other hopefuls, "making the search process biased and unfair in favor of one individual," CLLARO continues.

CLLARO wanted to see Joe Garcia, whose background includes stints as Colorado's lieutenant governor and the Colorado Department of Higher Education's executive director, to ascend to CU's presidency — and he was interested. But while Garcia was among eleven applicants to be quizzed by the search committee, he didn't advance to the interview stage with the regents.

No other Hispanics reached that point, either, prompting CLLARO to file a citizen complaint with Colorado Attorney General Phil Weiser on April 1. The group also submitted a Colorado Open Records Act request for "email and other communications since June 1, 2021, between former University President
Bruce Benson and the search committee and CU Regents; any and all communications between current Interim President Todd Saliman and the search committee, CU Regents, and the search firm; and the demographics for all CU presidential candidates interviewed but not chosen as a finalist." As of yesterday, CLLARO complains, this information had not been provided.

Westword reached out to CU for a response to CLLARO's assertions; the university has yet to provide one. Last week, however, the Board of Regents released the following statement in response to complaints from Latino groups about the process: "Many voices have helped shape this search and get us to this point. In the fall, we held more than 40 listening sessions with stakeholder groups to gather input. Our search firm has put together a very strong and diverse pool of candidates. The search committee spent many hours reviewing applicants, evaluating credentials, interviewing candidates, having meaningful conversations among committee members, and ultimately narrowing the pool to a list of candidates to forward to the board."

In addition, CU's announcement regarding the choice of Saliman stresses that "the board insisted on having a highly qualified and diverse candidate pool. To achieve that, the board hired Storbeck Search, a national recruiting firm with a reputation for building diverse search pools. Hundreds of people expressed interest in the job, and Storbeck presented the search committee with a highly qualified and diverse pool of 39 candidates: 13 women and 26 men — 13 candidates from Black, Indigenous and People of Color (BIPOC) groups — from 20 U.S. states, the District of Columbia and international candidates."

The search committee "spent many hours reviewing the candidates and discussing their credentials," the narrative continues. "They interviewed 10 candidates: seven women and three men — two BIPOC candidates — from seven states. Per Regent policy, the committee narrowed the field to five highly qualified unranked candidates, who were forwarded to the Board of Regents for interviews. Those candidates included three women and two men — one BIPOC candidate — from five states."

None of these efforts have mollified CLLARO, which believes that the decision to nominate Saliman as the only finalist "is yet another display of an inherent conflict of interest and potential unethical behavior by the CU Board of Regents. Our request for a new search process with a qualified Colorado search firm and a diverse and representative search committee has been ignored, and CLLARO and members of the Latino Action Council will continue to employ all legal avenues to hold the Board of Regents and Mr. Saliman accountable for their conduct."

But the CU regents are pushing forward. Over the next two weeks, "board members will receive input from the CU community at open forums with Saliman at CU’s four campuses and the system administration office," according to CU's announcement. "The event schedule will be announced soon. Regents also will meet with leadership teams, governance groups and community stakeholders. The board will consider all feedback from the CU community before meeting again the last week in April to elect a president."

Click to read CLLARO's citizen complaint to the Colorado Attorney General regarding the CU Board of Regents' president search.
KEEP WESTWORD FREE... Since we started Westword, it has been defined as the free, independent voice of Denver, and we'd like to keep it that way. With local media under siege, it's more important than ever for us to rally support behind funding our local journalism. You can help by participating in our "I Support" program, allowing us to keep offering readers access to our incisive coverage of local news, food and culture with no paywalls.
Make a one-time donation today for as little as $1.