Danielsfund.org
Agree or disagree with these statements: “Government should decide how business profits are distributed.” “I don’t feel much of an attachment to the USA.” “Differences in social standing are an incentive to work harder.”

High school seniors from across the West seeking prestigious Daniels Fund scholarships were asked to answer these and other questions on a newly designed application this year. Another question asked which flag evokes the strongest positive emotion: an American flag, a Canadian flag, a burning American flag or a Mexican flag.

The application’s contents provoked a strong reaction on social media late last week — the scholarship application deadline. Some upset former recipients wondered whether the program has lost its way, and a foundation representative defended its rationale and values.

“I used to be a proud Daniels Fund scholar, then I learned their politics and then was just grateful,” Denver City Council Representative Candi CdeBaca wrote on Facebook and Twitter. “I saw their 2019 scholarship application questions tonight after a student asked for a recommendation and now I’m straight up appalled and determined to fight as hard as we can for free college, period.” 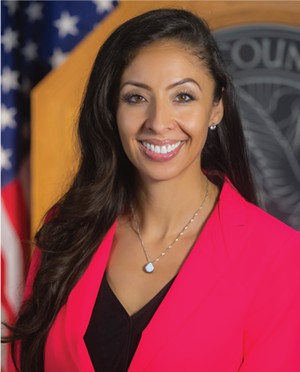 She went on to say the application screens “low-income teen applicants to make sure they are patriotic enough to believe being poor is their fault.”

Daniels Fund CEO Linda Childears told Chalkbeat on November 15 that the Denver-based foundation has always had the same focus on leadership, character, capitalism and patriotism. But after reevaluating the program this year, the board decided to put “a finer point on it” in response to what she described as general anti-business sentiment in the country.

“Bill made his money in business,” Childears said. “He flew in two wars defending America. Patriotism was not a soft thing for him. We need to make sure we’re giving Bill’s money to kids he would be proud of.”

The Daniels Scholarship Program has provided more than $188 million in undergraduate scholarships to more than 4,100 students from Colorado, New Mexico, Utah and Wyoming over the last twenty years. The scholarships cover four years of college at any accredited nonprofit college or university, and can be life-changing for low-income students.

The money comes from the estate of cable television billionaire Bill Daniels. The program website describes Daniels Scholars as “honest, respectful, self-reliant, and compassionate. They are proud Americans who value our free enterprise system and are prepared to give the world their very best shot.”

In a statement responding to CdeBaca on its website, the Daniels Fund said the new application seeks to identify scholars who share Daniels’ values.

Childears said the new application questions were developed in consultation with board members. They ask about personal qualities, like whether applicants can control their emotions or work to improve on their weaknesses, whether they think it’s acceptable to be five minutes late, or yell at other drivers in the car when no one can hear them. The questions probe how focused the applicants are, asking whether they can graduate college in four years and whether they might change majors.

And they also seek to assess how applicants view the United States and their place in it, asking whether they believe the economic system is rigged or whether it’s possible to live well here.

Not everyone agrees that the fund’s administrators are fulfilling Daniels’ wishes.

“As a Daniels Scholar, you learn all about the kind of man Bill Daniels was,” tweeted Royer Lopez. “If everything they taught us about him is true, he would be ashamed to see this.”

Childears said it “breaks her heart” that former scholars are criticizing the new application, and she doesn’t understand where their interpretations come from.

“We live in a world now where you say hello to someone, and it can be interpreted as offensive,” she said.

One of the questions probes whether applicants find telling white lies acceptable. But on Twitter, teachers and counselors said they were left wondering how to advise students to account for the politics of the people making decisions about the scholarships.

More than 2,000 people applied for this year’s scholarships.

Asked whether the pushback would lead to any changes in next year’s applications, Childears said, “We always evaluate. Our board will be meeting in a couple of days, and I’m sure this will be a topic of conversation. But what we will not change is the focus on character, service, leadership, patriotism, and capitalism.”

You can read the full scholarship application here.

This story was originally published November 16 by Chalkbeat, a nonprofit news organization covering public education. Sign up for the Chalkbeat newsletters here.