David Lesh: keepin' it classy. YouTube
David Lesh wants everyone to know that he’s only pretending to be an obnoxious asshat with absolutely no respect for this state's land, laws and residents. The owner of Denver-based outdoor apparel company Virtika has been under the scrutiny of law enforcement ever since he started drawing attention to his brand by purposefully pissing people off by breaking the law. Or at least trying to convince people that he has broken the law.

Coloradans might remember that Lesh was the “piece of shit taking a shit” in a photo that he posted to Instagram in 2020. While Lesh now claims it was a Photoshopped fake, he published the image of himself defecating in the protected area of Hanging Lake on Instagram, with a caption that made no mystery as to what he was trying to show his “fans.”

Triumphantly violating a lake isn’t the crime for which Lesh was convicted, however. Instead, he was “charged and convicted in federal court for driving a snowmobile off a designated route and selling merchandise or conducting work activity on U.S. Forest Service (USFS) land,” according to a statement from the New Civil Liberties Alliance, which is representing Lesh in his appeal of that conviction. It earned Lesh six months’ probation, 160 hours of community service and a fine of $10,000. 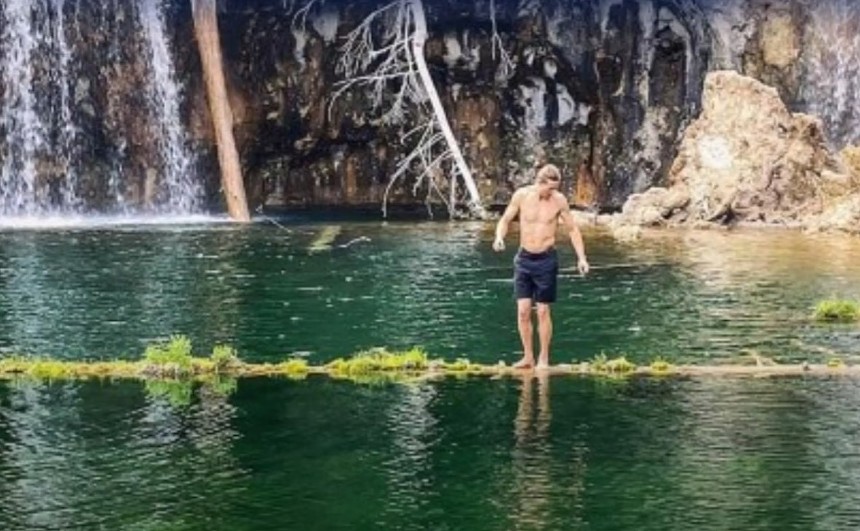 Weird: Lesh is often surrounded by water, and yet remains so very thirsty.
YouTube
The argument for the appeal, according to NCLA Litigation Counsel Jenin Younes, starts with jurisdiction. “It’s an abuse of the agency’s power,” she says, as Congress did not delegate authority to prosecute over a post on social media. Younes argues that “it’s either not a proper grant of Congress’s power, or the agency itself is interpreting its authority too broadly. It’s problematic whichever way you look at it.”

Furthermore, there are evidentiary issues with the case, according to Younes: “The photo in question, you can’t see the person’s face. They had some circumstantial evidence.”

The NCLA claims that Lesh’s conviction stemmed not from his actual actions, but the animosity created when authorities were forced to drop their initial case into his reported bowel-related trespass in the Maroon Bells. The Alliance further argues that when the government couldn’t prove that the photos were real and not Photoshopped, as Lesh later claimed, the USFS became determined “to hold Mr. Lesh criminally liable for something anyway—regardless of whether he had, in fact, committed a crime.”

Younes calls it a “new low” by the U.S. Forest Service. “To secure a conviction in this case, both the prosecutor and the court twisted the law far beyond any reasonable interpretation," she says. "In the process, they violated Mr. Lesh’s constitutional rights. We are confident that on appeal, Mr. Lesh will prevail.”

The question of whether it’s a crime to present a false image of an illegal act as an actual act — up to and including purposeful and performative actions like posting it, claiming it, commenting on it, and reaping whatever influencer-type rewards might come from it — is one on which the courts have yet to fully rule.

Younes describes the NCLA's mission as “addressing agency overreach” in government, and the NCLA website talks about abuses of the “Administrative State.” The organization claims to be non-partisan, which it seems to be in the same way that Fox News is “fair and balanced.” After all, over three million dollars of NCLA funding from 2017 to 2020 came from the Koch Brothers — something you can only tell through a search of its IRS findings, as the group chooses to keep its donors private. But the NCLA’s right-wing record speaks for itself: It actively fought against restrictions during the COVID pandemic (as did Younes herself), and argued in favor of corporate rights over those of LGBTQ and minority employees. Perhaps most telling is how it self-describes in an online job posting: “Think of [the NCLA] as a civil libertarian alternative to the ACLU that actually cares about the rights in the Constitution.”

The ACLU has been instrumental in protecting the rights of Americans for over 100 years. The NCLA has been fighting the American government starting all the way back in 2017. Will the NCLA achieve the prominence and longevity of the ACLU? Probably not with that attitude. Or clients like Lesh.

But it could be the perfect organization to hoist the obnoxious flag of David Lesh and defend his right to pretend to crap in lakes and break sundry laws of both environmentalism and good taste.
KEEP WESTWORD FREE... Since we started Westword, it has been defined as the free, independent voice of Denver, and we'd like to keep it that way. With local media under siege, it's more important than ever for us to rally support behind funding our local journalism. You can help by participating in our "I Support" program, allowing us to keep offering readers access to our incisive coverage of local news, food and culture with no paywalls.
Make a one-time donation today for as little as $1.