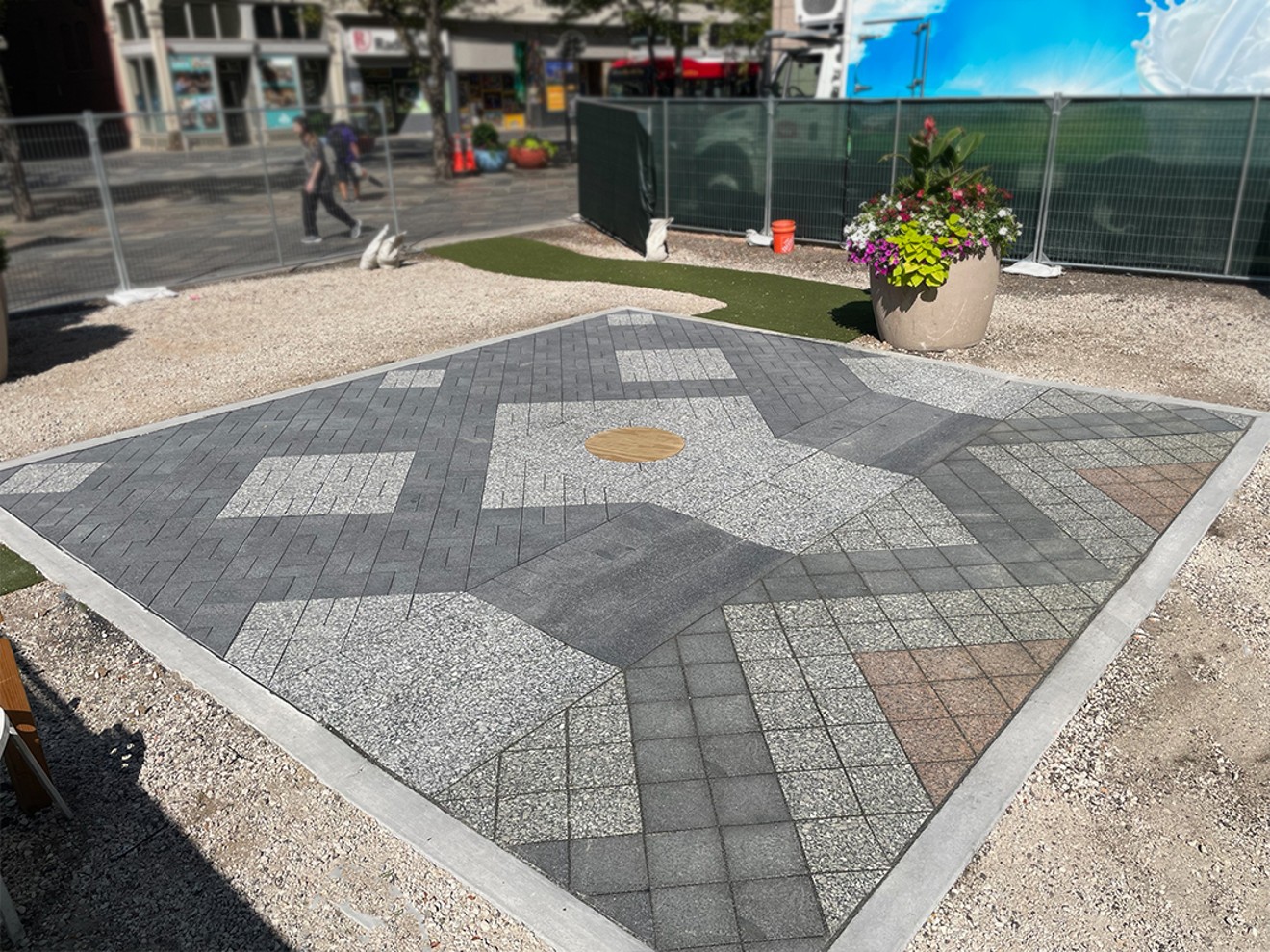 The new 16th Street Mall surface will be much less slippery. Department of Transportation and Infrastructure
While the 16th Street Mall remains under construction, the City of Denver has unveiled what the new pedestrian surface will look like when the project is complete at the end of 2024.

"The idea is you can see, feel, experience it," Nancy Kuhn, a spokesperson for the Denver Department of Transportation and Infrastructure, said on August 17, at the opening of an exhibit that previews the pavement of the future 16th Street Mall. The display, which is located at Welton and 16th street, will remain open to the public for the duration of the construction project, which began in April.

PCL Construction Services is currently building out the new mall using $149 million in city, state and federal funds after being selected for the job by Denver. One of the most significant aspects of the project, which comes as downtown boosters are trying to increase foot traffic in the heart of Denver, is replacing the four-decade-old pavement, which has become a slip danger in the rain.

"We're trying to honor the design but use a new granite paver to walk on, so you won't slip," Kuhn said, and the sample pavement definitely has more traction than the current pavement on the 16th Street Mall.

More slippery was the issue of replacing the pavement's design, created by legendary architect I.M. Pei and Laurie Olin. The city couldn't bring back the iconic hyperbolic paraboloid, a structure on the mall designed by Pei, who died in May 2019, and demolished in the ’90s. But it did consult with Olin Studio on the pavement renovation in order to preserve the original character.

The rattlesnake pattern was "actually a Navajo rug-inspired design," says Jason Whitlock, a principal city planner and urban designer with Denver. "We really worked to keep the geometry of the white, red and gray areas as close to where they are today."

The exhibit also shows how the parts of the mall that currently have two separated bus lanes with a raised middle section will be transformed into two-lane bus areas without a middle section. The extra space will get added to the sidewalks, so that people will have more room to walk and restaurants will have space for patios. Curbs will also largely disappear, as the new design calls for a seamless transition from the pedestrian path to the bus lanes.

"We discovered that more space along the edge was really valuable to people," Whitlock said. "People don't tend to walk in the middle or sit in the middle."

The project also calls for adding more trees. Although the 16th Street Mall once had red oak trees at the ends of the pathway, there are only honey locusts now. In the future, the mall will have a mix of three to five different tree species that will have an "aesthetic kinship" to the honey locust, which allows some glittery shadows, according to Whitlock.

"The trees will be planted in such a way that their roots will start touching in the future," Whitlock added, noting that placement will help improve their health.

And while for many the mall has simply become a commuting stretch, the city envisions an area where people really come to linger.

"If there's something that the mall is missing, it's a little bit of laughter," said Whitlock. So people can expect more fun areas to hang out, like the sections where the red-top chairs have been located. There will be two enclosed play areas for kids, one of which will be shaped like a slice of a honeycomb.

And the mall will have better lighting, including a transition designed to intrigue people to stick around after the sun sets.

The changes all come from envisioning the 21st-century street as a "place," Whitlock said. "Healthy spaces are about a mix of people."
KEEP WESTWORD FREE... Since we started Westword, it has been defined as the free, independent voice of Denver, and we'd like to keep it that way. With local media under siege, it's more important than ever for us to rally support behind funding our local journalism. You can help by participating in our "I Support" program, allowing us to keep offering readers access to our incisive coverage of local news, food and culture with no paywalls.
Make a one-time donation today for as little as $1.