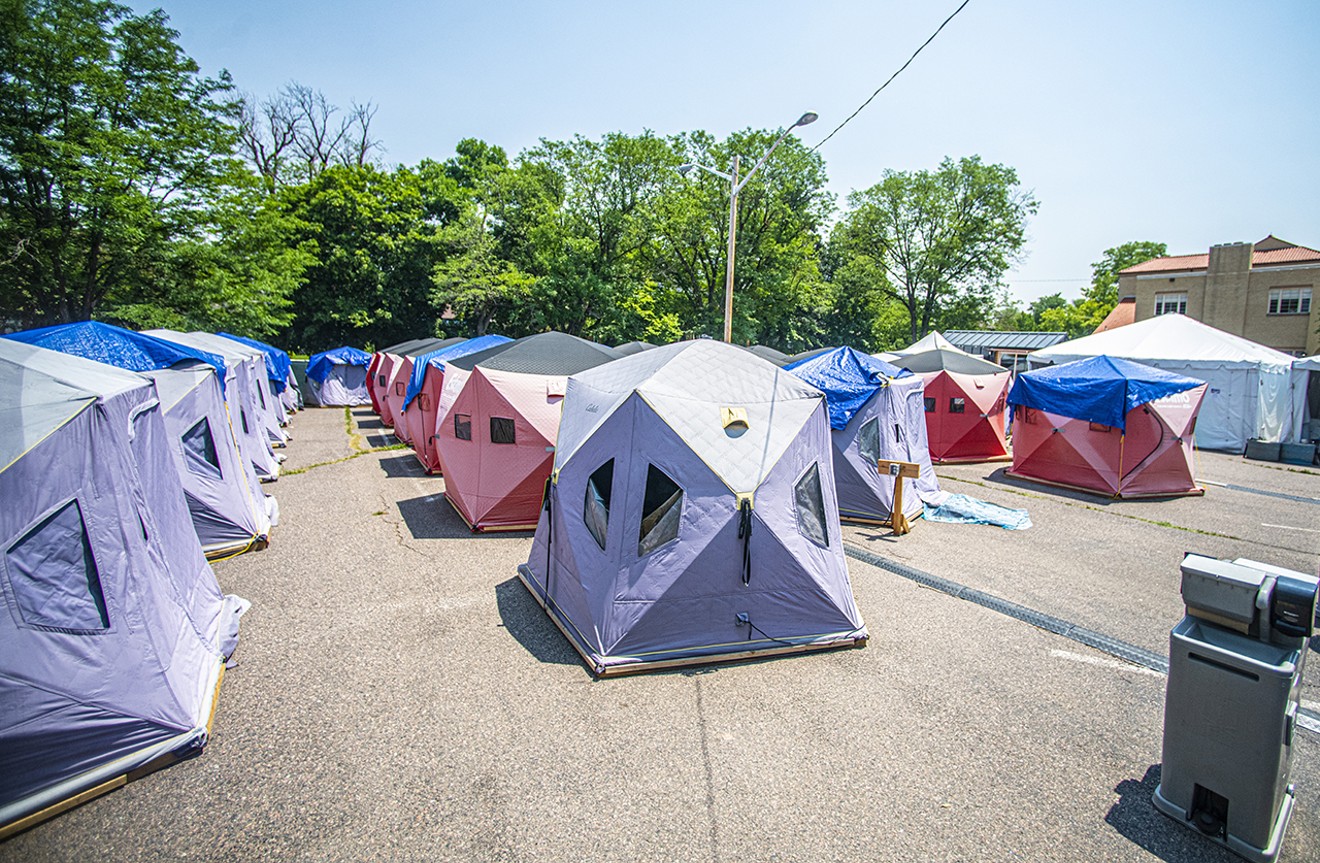 The safe-camping site just off Montview Boulevard. Evan Semón
After deliberating for a week, the Denver  Board of Adjustment for Zoning Appeals has voted to uphold the permit for a safe-camping site in Park Hill.

"My feeling is they have addressed most of what the city would have had to take into account in order to look at the zoning code and make the decision to begin with," Nancy Burkhart, a member of the Denver Board of Adjustment for Zoning Appeals, said before the vote August 3.

Burkhart and Charlie Young, another member, voted that the Denver zoning administrator had properly issued the permit for a safe-camping site in the parking lot of Park Hill United Methodist Church on Montview Boulevard, while three other members voted that the zoning administrator had erred in issuing the permit. Since a supermajority of four votes was required to revoke the permit, the 3-2 vote means the site can stay.

The vote came in response to an appeal filed by Park Hill residents opposed to the safe-camping site, which began operating in June. Those same residents had also filed an appeal that challenged the zoning administrator's general right to create a temporary use for safe-camping sites, which aren't listed on approved uses. The Board of Adjustment for Zoning Appeals rejected that appeal last month. Park Hill residents had filed these appeals after a Denver District Court judge had quickly dismissed a lawsuit in which residents tried to block the establishment of the safe-camping site, saying that the plaintiffs had to first exhaust all possible administrative remedies — namely a Board of Adjustment appeal — before filing suit.

For the appeal specifically related to the Park Hill safe-camping site, the Board of Adjustment held a four-and-a-half-hour hearing on July 27, during which the appellants argued that the permit should not have been issued because of the site's proximity to the church's preschool and its lenient drug policy, as well as the perceived lack of public engagement before the permit was issued and the zoning administrator's alleged failure to get input from other agencies before issuing the permit. The zoning administrator and the Colorado Village Collaborative, the nonprofit that runs the site, rejected these arguments.

Still, the three Board of Adjustment members who voted in favor of the Park Hill site appeal — Penny Elder, Frankie Schultz and James Keavney — found the arguments to carry some weight.

"It feels to me as if this was a foregone conclusion that this was going to happen and the process was adapted to check the boxes and get this thing issued," Elder said at the August 3 meeting. "I don’t believe it was issued properly."

And although Young voted to reject the appeal, he still feels that Denver City Council should've passed legislation to create a safe-camping-site program so that it was not solely handled by the zoning administrator. "I think there should be more rulemaking around it. That’s not our job," Young said on August 3.

To Cole Chandler, the director of the Colorado Village Collaborative, the 3-2 vote "doesn't exactly feel like wind behind our sails," but he says he's "grateful to be able to continue welcoming unsheltered folks into the parking lot" at the Park Hill safe-camping site for the next five months, until the lease runs out December 31. "We're grateful that our long-term goals to expand this model remain intact," he adds.

Denver's first safe-camping sites were located next to churches in the Capitol Hill neighborhood and were up from December 2020 through May of this year. The Colorado Village Collaborative, in partnership with the St. Francis Center, operates another safe-camping site in a parking lot on Regis University's campus. That site also has a lease that runs to December 31.

But with the Board of Adjustment appeals out of the way, there's the possibility that neighbors could again file suit against the Park Hill safe-camping site — and the city's approval of safe-camping sites in general.
KEEP WESTWORD FREE... Since we started Westword, it has been defined as the free, independent voice of Denver, and we'd like to keep it that way. With local media under siege, it's more important than ever for us to rally support behind funding our local journalism. You can help by participating in our "I Support" program, allowing us to keep offering readers access to our incisive coverage of local news, food and culture with no paywalls.
Make a one-time donation today for as little as $1.