Denver residents celebrating the end of WWI on the corner of 16th and Champa streets. Courtesy of Denver Public Library

Sunday, November 11, marks 100 years since World War I ended. On that day a century ago, Germany signed an armistice with allied powers — hence the name Armistice Day.

When news of the truce got out, Denverites started gathering in the streets and celebrating the U.S.'s victory over the Huns. But it wasn't the first time that Denver residents had celebrated the end of World War I. Some had done so only four days earlier.

On November 7, the Denver Times, one of the city's dailies, published an evening extra with the gigantic bold headline: "PEACE! ARMISTICE IS SIGNED; GERMANY GIVES UP." The Denver Times got the story from one of the nation's wire services, United Press, as did plenty of other papers in the U.S. Upon the release of this breaking news, victory celebrations started taking place across the country, including in Denver, where bells were ringing and whistles were screeching, according to the Denver Post. Merchants even displayed the news of the war's end on the windows of their stores.

There was just one problem, however: Germany hadn't yet signed the armistice agreement.

The Denver Post wasted no time in using this misreported end-of-the-war story to blast the rival Denver Times. On the morning of November 8, the Post ran this headline on its front page: "Fake Peace Yarn Fools Millions: Lie By United Press Results in Several Deaths." Where and how those deaths happened is unclear, but what is clear is that the Post went on to blast the Denver Times and United Press and even referred to the misreporting as "fake news" and a "deliberate, premeditated and mercenary newspaper crime."

The "premeditated" part of this criticism comes from the fact that the Denver Times apparently called the Post before it printed its erroneous story and asked for confirmation. The Post, as it reported in its own paper in the days following the fake story, wrote that it told the Denver Times that the story had not been confirmed, but apparently the message was lost in translation.

Despite what the Post wanted readers to believe, United Press and the Denver Times weren't actually trying to fool readers. What happened was just a bad case of rumor-spreading in the highest levels of the U.S. military and then to a reporter based in France, whose editors did not double-check the information. It was the 1918 version of fake news spreading on Twitter.

On November 7, the German armistice delegation traveled to pick up the armistice terms from Allied commanders. Allied military officers misinterpreted this information and started broadcasting that the armistice had been signed, according to James Smith, a retired history teacher who wrote an article about this moment in history.

The misinformation traveled all the way to Admiral Henry Wilson, commander of U.S. Naval forces in France. Wilson then gave the update that the war had ended to Roy Howard, the president of United Press, who was  based in France. Howard, thinking Wilson's word was accurate, fired off a telegram announcing the end of the war to United Press headquarters in New York. The news then traveled across the U.S., kicking off celebrations. 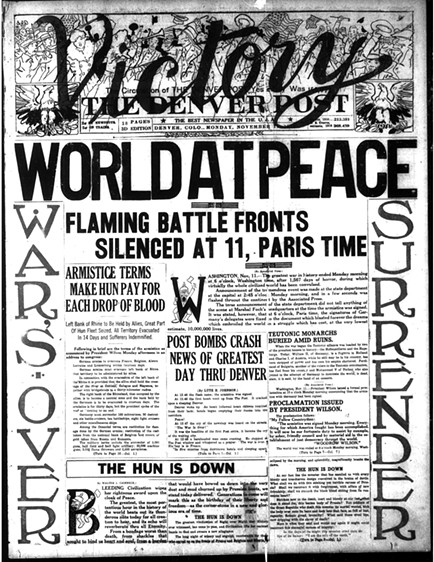 After this initial moment of nationwide glee, word eventually spread that the war had not actually ended, and Denver and other metropolises across the U.S. calmed down, still eagerly awaiting the inevitable surrender of the Germans. That day finally came on November 11, and the war that resulted in approximately 40 million civilian and military casualties, including plenty of Coloradans, came to an end. The celebratory parties finally commenced, including a big victory dance and parade in Denver. 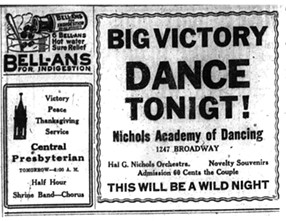 Despite his huge reporting mistake, Roy Howard went on to continue a successful newspaper career, eventually moving to publishing company E.W. Scripps Company, which, at the time of his hiring, became Scripps-Howard Newspapers. The company ended up buying the Rocky Mountain News in 1926 and merged it with the Denver Times.

Howard stood by his reporting on November 7, 1918, until the day he died.

“In my opinion, no real reporter could have or would have done otherwise in the circumstances," he told the New York Times.
KEEP WESTWORD FREE... Since we started Westword, it has been defined as the free, independent voice of Denver, and we'd like to keep it that way. With local media under siege, it's more important than ever for us to rally support behind funding our local journalism. You can help by participating in our "I Support" program, allowing us to keep offering readers access to our incisive coverage of local news, food and culture with no paywalls.
Make a one-time donation today for as little as $1.