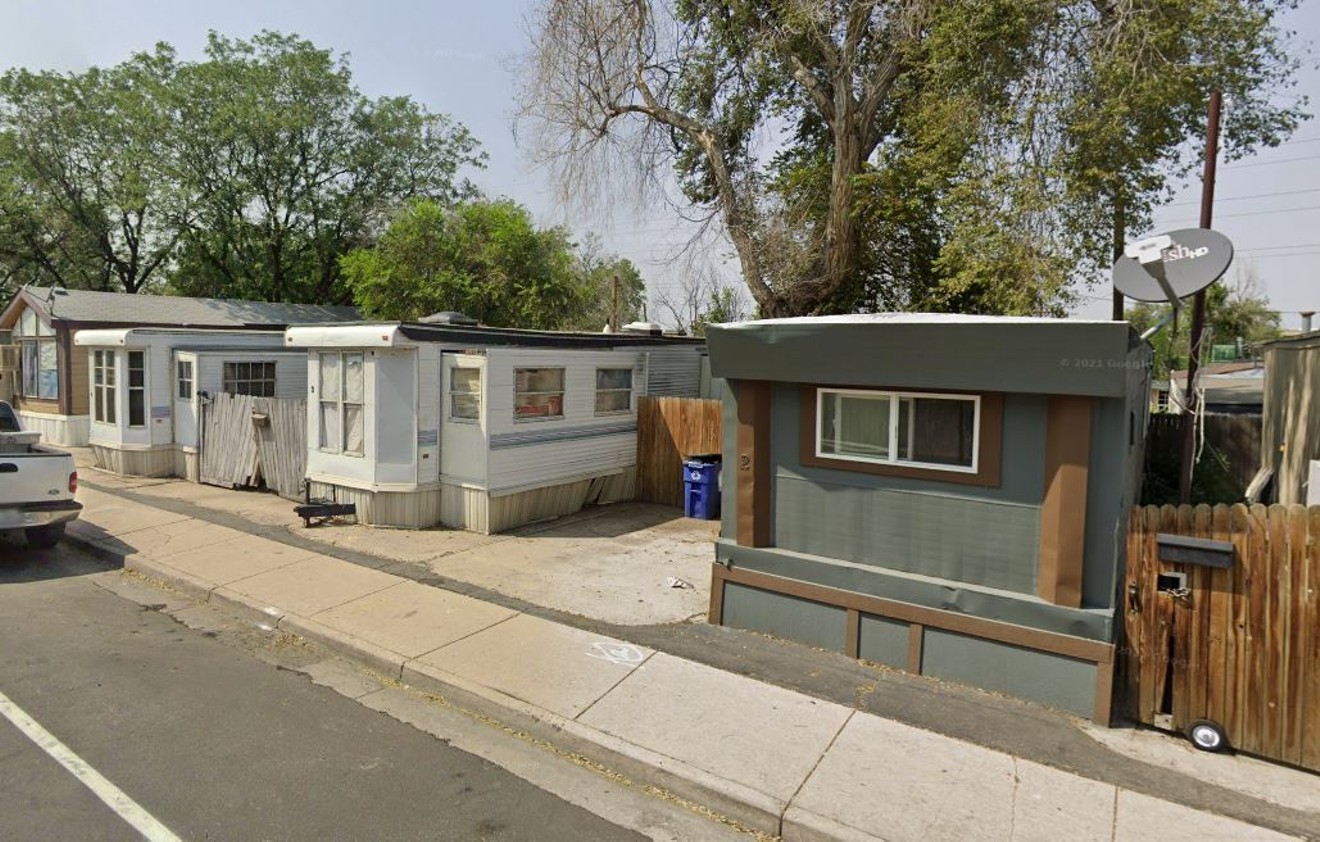 This mobile home park at 4501 West Kentucky Avenue is one of five in Denver. Google Maps
Denver has over 300 mobile homes spread across five mobile home parks within city limits. Many of these prefabricated homes, which are some of the most affordable unsubsidized housing options available, are over fifty years old. But owing to building and zoning code restrictions, their owners haven't been able to replace the units with newer and safer models. Three Denver City Council members would like to change that.

"In our zoning code right now, there is no zoning for mobile home parks," council president Jamie Torres said during a July 25 Denver City Council Budget and Policy Committee meeting. At the time, Torres pitched a policy proposal she's been working on with councilmembers Candi CdeBaca and Jolon Clark that would tweak part of the Denver Zoning Code to allow residents of mobile home parks to replace their units with safer upgrades. The proposal, which is still in the drafting stage, would also enact a temporary moratorium on the buildout of mobile home parks, and it would create a new zoning district for mobile home parks.

"It’s pretty simple. We’re discriminating against this housing type. We’re trying to create a space in the code to allow it," CdeBaca said.

Two of the city's mobile home parks are in Clark's district, two in CdeBaca's district and one in Torres's district.

While often much more affordable than traditional housing options, mobile homes have a major drawback: The land on which they're located is usually not owned by the homeowner. If a mobile home park is sold and the new owner jacks up rates, homeowners who can't afford the new rates risk losing their mobile homes, which is now happening nationwide at an increased clip.

In recent years, the Colorado Legislature has passed a series of bills to help mobile home park residents purchase the property. In 2020, the legislature mandated that park residents have ninety days to make an offer to buy the park where they live if it goes on sale; in 2022, the legislature doubled that window to 180 days and added other protections. Lawmakers also approved a bill creating a loan and grant program for mobile home residents so that they can work toward purchasing the parks.

That's created a "hiccup" for securing financing to buy these parks, according to Jill Jennings Golich, deputy director of the Denver Department of Community Planning and Development.

The Denver Zoning Code technically allows mobile home park residents to replace their current homes with units that are of "substantially similar construction and size," explains Laura Swartz, a spokesperson for CPD. But the code doesn't allow for "replacing a mobile home with a newer, [Housing and Urban Development]-labeled unit, as that is considered an expansion under the code."

Even if a homeowner can find a unit that qualifies, it's "likely not in better condition" than the current homes, Jennings Golich told the committee.

And there's one more twist: Denver abides by the International Building Code, which wouldn't allow for units to be as close as they are currently in most Denver mobile home parks.

"A zoning code change does not change the building code. This will not resolve in a one-for-one unit replacement because of the separation issues that exist," Jennings Golich said. "One of the first things that would have to be done is a survey for the park to understand current conditions, because we can’t reduce that life-safety issue that exists today and exacerbate that with new construction."

But at least some of the units could be replaced "with a HUD-certified unit," Jennings Golich added, and that would open the door for financing and a potential community ownership of the mobile home parks.

Torres, CdeBaca and Clark plan to continue working on the proposal so that by early 2023, Denver City Council could adopt a zoning code amendment that would allow for HUD-certified units to replace current mobile homes. And within the next few years, they hope to have codified a new zone district for mobile home parks.
KEEP WESTWORD FREE... Since we started Westword, it has been defined as the free, independent voice of Denver, and we'd like to keep it that way. With local media under siege, it's more important than ever for us to rally support behind funding our local journalism. You can help by participating in our "I Support" program, allowing us to keep offering readers access to our incisive coverage of local news, food and culture with no paywalls.
Make a one-time donation today for as little as $1.