Without a Liquor License, What Will Happen to 1919 Blake? 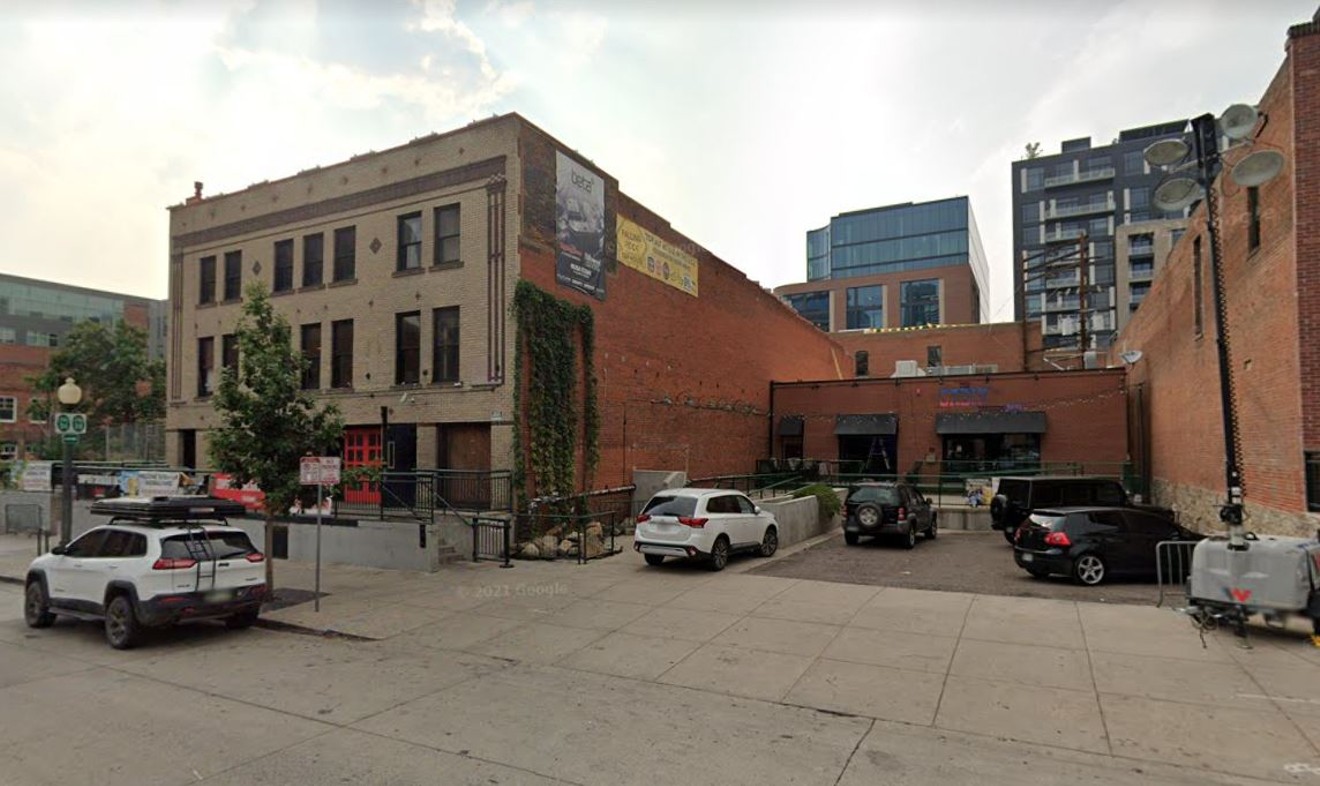 What the heck has been happening at Cabin? Google Maps
For over 24 years, 1919 Blake Street was home to the world-famous Falling Rock Tap House, a staple of the craft-beer scene that was a destination spot for people coming to Denver for the Great American Beer Festival. But that era ended last summer, when owner Chris Black learned that the building that housed his bar was being sold, and he announced that he was closing Falling Rock at the end of June 2021.

That's when things got weird.

Valentes Corleons (legal name Hussam Kayali), who owns the neighboring Beta Event Center at 1909 Blake (but not the building that houses it), purchased the building at 1919 Blake Street for $2.5 million.

On July 2, Corleons applied for a transfer of ownership of the hotel and restaurant license that had been under Black's name, as well as a new dance cabaret license and a temporary permit to operate the Falling Rock space, which Corleons planned to transform into Cabin Tap House. The Denver Department of Excise and Licenses issued a 120-day temporary permit a week later; Corleons got a sixty-day extension in early November.

By then Cabin was up and running, but Corleons had problems at Beta. In August, the Department of Excise and Licenses had issued a show-cause order regarding the club's liquor license, citing alleged law and code violations, including some found by Denver Police Department officers during an undercover operation that summer. The order started a lengthy administrative process, including two full-day hearings in November. On December 8, the hearing officer, former Denver District Court judge Federico Alvarez, recommended that Beta lose its liquor license, citing as "extraordinarily aggravating" circumstances the fact that Corleons had introduced himself to a cop as a "made man" in the Sicilian Mafia and the allegation that Corleons had tried to bribe a cop to make the investigation of Beta go in his favor. Corleons denied that allegation, and vowed to fight to keep the liquor license. Early on January 1, a series of fights broke out at Cabin, and two patrons were shot to death inside the club. Hours later, the Department of Excise and Licenses ordered a temporary suspension of Cabin's liquor license, and the club went dark. On January 12, 22-year-old Levi Floyd Diecidue was arrested in connection with the shootings; charges include first-degree murder.

In the wake of the shootings, Corleons voluntarily closed Beta, too.

And the city was ready to make that closure permanent on January 5, when outgoing executive director Ashley Kilroy revoked the liquor license for 1909 Blake on her second-to-last day on the job. Corleons vowed to fight on, however.

But in the meantime, Corleons revealed that he'd sold Cabin.

"Investigation shows that Schaefer presented himself as the owner of The Cabin on January 1, 2022, and that he identified Kayali as a prior owner/manager with continuing ties to the business by way of employment and staffing between Kayali’s Beta Nightclub and The Cabin. Additionally, Schaefer operated 1919 Blake Street as The Cabin Tap House, a Dance Cabaret during this time," according to another show-cause order, this one issued on January 12 by interim executive director of the Department of Excise and Licenses Molly Duplechian, who set an administrative hearing date for January 18.

The order included not just Corleons and Schaefer, but also Black, much to his surprise — and dismay. The establishment's liquor license still technically belongs to him, since the Department of Excise and Licenses has never ruled on either of the transfer applications,

Just hours before the January 18 hearing, Schaefer emailed the Denver City Attorney's Office, saying that he was withdrawing his liquor license application. A couple of minutes before the hearing, Black voluntarily surrendered the liquor license for 1919 Blake Street.

Chris Black at the taps at Falling Rock.
Jonathan Shikes
As a result, the January 18 hearing lasted around fifteen minutes. Attorneys representing the City of Denver filed a motion to continue the hearing to a later date so that Duplechian can decide whether to accept Black's voluntary surrender of the venue's liquor license. Neither Schaefer nor his lawyer were present during the virtual hearing. (Schaefer has not responded to numerous interview requests from Westword.)

"My name was still technically on the license because the transfer had never gone through," explains Black, who adds that he secured a stipulation from the City of Denver stating that he's had nothing to do with the establishment at 1919 Blake Street since July 2021.

According to Eric Escudero, a spokesperson for the Department of Excise and Licenses, Duplechian (who's been nominated to become the permanent director by Mayor Michael Hancock) has three choices. She can accept the surrender and treat it as a revocation, which would mean that Black, who had nothing to do with the operations of Cabin, would be ineligible to apply for another liquor license for two years. Duplechian could also accept the surrender without a revocation. Or she could decide to decline the surrender and still hold a hearing.

That's also the situation facing 1909 Blake. On January 21, Corleons's attorneys and the city will again face off in Denver County Court over whether the club should be declared a public nuisance. That could result in the building essentially being off-limits to any kind of entertainment enterprise for three years; it's been owned by Colman Kahn since 1989. During that time, he's leased the building to numerous entertainment outlets, including Beta.

Black would just like to see calm return to the 1900 block of Blake, where Falling Rock operated without incident for over two decades.

"Hopefully the neighborhood will be able to recover," he says. "They've just slaughtered the other businesses around. Nobody wants to go down there."
KEEP WESTWORD FREE... Since we started Westword, it has been defined as the free, independent voice of Denver, and we'd like to keep it that way. With local media under siege, it's more important than ever for us to rally support behind funding our local journalism. You can help by participating in our "I Support" program, allowing us to keep offering readers access to our incisive coverage of local news, food and culture with no paywalls.
Make a one-time donation today for as little as $1.