Cop Accused of Child Luring Has Made Bad News Before Timothy Hyatt's booking photo and a screen capture from video of him illegally dumping trash in 2016. Jefferson County Sheriff's Office/CBS4 Denver
Today, August 10, Denver Police Department Sergeant Timothy Hyatt, 45, will make his first appearance in a Jefferson County court on an internet-luring-of-a-child charge — and the announcement of his arrest wasn't the first time he's made news for dubious reasons. Hyatt's bust marked the third time in the past six years that he's generated uncomfortable headlines — one for illegally dumping trash and another for a fatal police shooting during which his gun jammed.

According to the Jefferson County Sheriff's Office, Hyatt's current case began in February, when he reportedly started communicating with someone he believed to be a fourteen-year-old girl using "multiple social-media platforms and a variety of online identities." Along the way, he allegedly "made many sexually explicit advances toward the young teen." The inquiry culminated with Hyatt turning himself in to authorities around 9 a.m. on August 9.

A Denver cop since 2005, Hyatt was disciplined in 2016, after CBS4 Denver obtained surveillance video of him putting his own trash into the dumpster of MB Marble, a business in southwest Denver. At the time, he was wearing work gear, including a shirt with the word "POLICE" across the back.

"I had an old hot tub cover in my yard that needed to be thrown away, and I did place it in the dumpster," Hyatt was quoted as saying. "I am aware this wasn't the correct decision, as it has a direct impact on the business affected. This particular incident was an unfortunate event and is not something I have done in the past." He was fined one day for his actions. 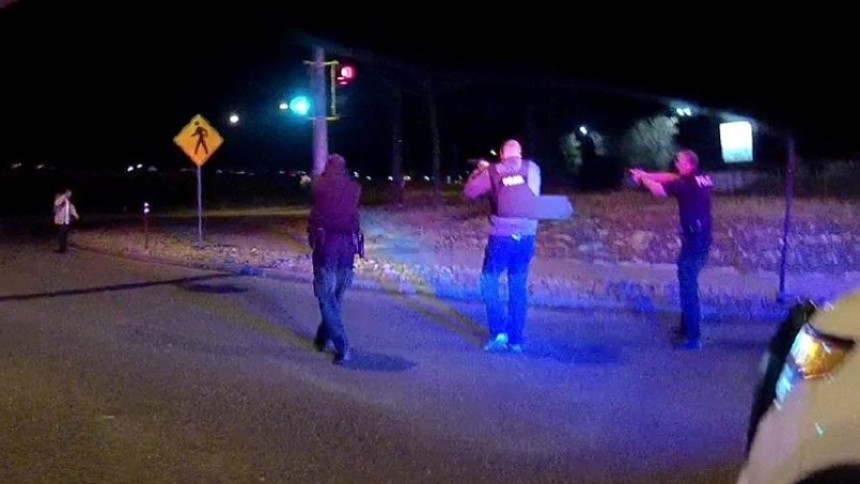 According to the decision letter issued by the 18th Judicial District DA's Office, on January 6 2020, a fixed license-plate reader located at Sixth Avenue and Federal Boulevard caught sight of a stolen Chevrolet Avalanche. Members of the Denver Police's District 4 "Impact Team" were able to track it to a storage facility at 2240 South Xapary Way in Aurora, where Heckenkamp spotted Descheenie fleeing. During a subsequent foot chase, Descheenie produced a handgun and pointed it at his own head before aiming it at a woman whose vehicle he tried to carjack. The woman was able to drive away, at which point Descheenie allegedly pointed the gun at the two nearest cops, Heckenkamp and Hyatt. Heckenkamp returned fire in a big way, squeezing off fourteen shots, five of which hit Descheenie, who died as a result of his wounds. Hyatt "attempted to shoot Mr. Descheenie," the report maintains. "However, his weapon had a mechanical malfunction and did not fire."

Jason Siers, the 18th Judicial District chief deputy district attorney who authored the letter, found that "Officer Heckenkamp and Sergeant Hyatt were justified in using deadly physical force against Nico Descheenie to defend themselves and nearby motorists from the imminent use of deadly physical force."

Authorities won't be sanctioning Hyatt's behavior this morning in Jeffco court, where he's scheduled to be advised of the charges against him and a decision about bond will be made.

Hyatt, who's recently been working in the DPD's patrol division, is currently on non-paid administrative leave. That's standard procedure under such circumstances, as exemplified by the case of father-and-son Denver cops Michael and Santana Pineda, arrested in late July and accused of felony theft for supposedly billing a private employer for off-duty work they didn't actually perform.

Click to read the Nico Descheenie officer-involved-shooting decision letter.
KEEP WESTWORD FREE... Since we started Westword, it has been defined as the free, independent voice of Denver, and we'd like to keep it that way. With local media under siege, it's more important than ever for us to rally support behind funding our local journalism. You can help by participating in our "I Support" program, allowing us to keep offering readers access to our incisive coverage of local news, food and culture with no paywalls.
Make a one-time donation today for as little as $1.