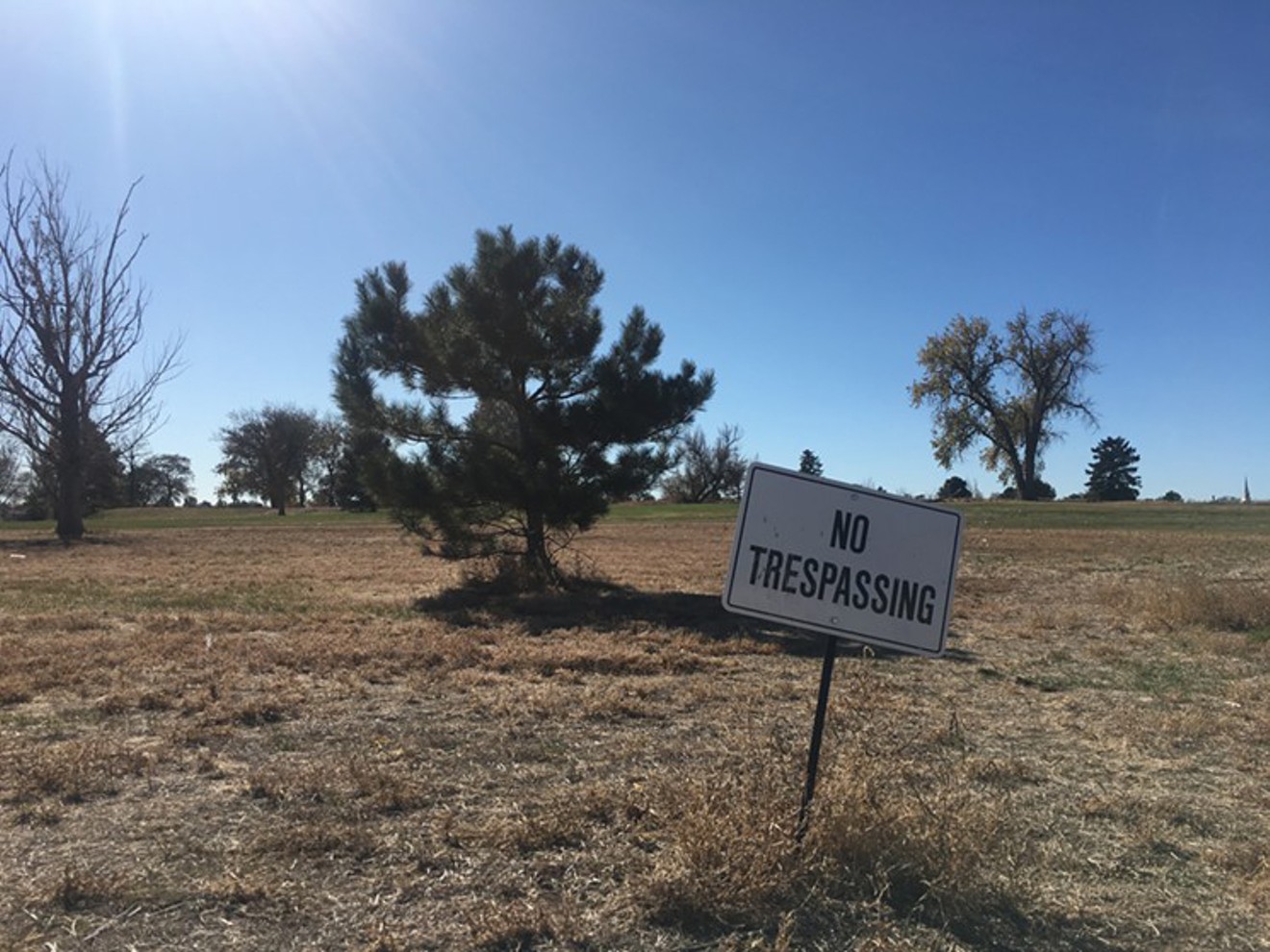 What would you like to see here? Sara Fleming
While the Park Hill Golf Course has been closed since 2018, the games continue over the 155-acre property, a rare swath of open space within Denver city limits.

The games are getting so complicated that we've come up with this cheat sheet to help you understand the action:

History of the property

The Park Hill Golf Club opened in 1932 on what had been the Clayton College Dairy Farm. Until 2019, the property was owned by the George W. Clayton Trust, which is connected to Clayton Early Learning, a nonprofit that works with low-income children and runs a preschool and education research institute. The City of Denver once had control of the trust, and at one point wanted to buy the golf course outright for $2 million generated by a 1989 bond measure. When that amount proved too small for the purchase of 155 acres that then held an operational golf course, the city instead paid $2 million to the trust in exchange for a conservation easement that limited the land's potential uses. Denver City Council approved that easement in 1997, while Wellington Webb was mayor.

In 2019, Westside Investment Partners, a development company, bought the property for $24 million, essentially banking on being able to develop it after obstacles posed by the conservation easement were removed.


Save Open Space Denver, a community advocacy group that counts former state legislator Penfield Tate and former mayor Webb as members, wants to see the Park Hill Golf Course property turned into a city park. The large tract of land is a rare open-space commodity, and once it's developed, there's no going back, Save Open Space Denver members warn.

Westside and attorneys for the City of Denver believe that under the conservation easement, the property must be used primarily as an eighteen-hole golf course. In order for any development to happen on the property — or for it to even be used as a park — they insist that the conservation easement must be lifted. And that can only be done by a vote of Denver City Council.

YES for Parks and Open Space, a committee spinning off from Save Open Space Denver, has already submitted signatures to put an initiative on the November 2021 ballot that, if passed, would effectively block any Park Hill Golf Course project from moving forward — even though that property isn't mentioned in the initiative's language. If passed, the measure would require a citywide referendum any time the City of Denver wants to lift a conservation easement. SOS Denver is now waiting to hear from the Denver Elections Division as to whether the group has the 9,184 valid signatures it needs to land the initiative on the ballot; it collected over 13,000.

Westside is now funding its own ballot initiative, whose language is almost identical to the YES for Parks and Open Space proposal. The only difference? This initiative defines a "conservation easement" in Denver in such a way that the Park Hill Golf Course easement would be exempt from needing voter approval in order to lift it.

If both initiatives pass, the Westside-funded measure would effectively block the vote required by SOS Denver's proposal, and Denver City Council could lift the Park Hill Golf Course easement without going to the voters. The Denver Elections Division signed off on the language of the new initiative on June 8; the deadline for submitting the required number of valid signatures is July 6.

Since Denver City Council currently has the final say on whether to lift the conservation easement, the City of Denver can also have some say in what goes on the property.

Since February, the Department of Community Planning and Development has been leading a "visioning process" for the Park Hill Golf Course. The community steering committee for this process will provide recommendations to city officials on what should be done with the land later this summer. If the process goes smoothly — and isn't upended by any ballot initiatives — it will eventually result in a small area plan crafted by CPD and a development agreement with Westside and Holleran. All of this would happen before Denver City Council took a vote on lifting the easement and agreed to any rezoning of the property to accommodate the development plans.

Members of the steering committee include a wide range of individuals, including Kenneth Ho, the Westside project lead; the imam at a nearby mosque; neighbors; and even a member of Save Open Space Denver.

While the city insists the steering committee comprises a diverse group of people representative of nearby neighborhoods that should have a say in what happens on the Park Hill Golf Course property, Save Open Space Denver contends that the membership is stacked in favor of the developer. "The committee clearly has a developer bias and slant in perspective," Tate says.

Early this year, a city contractor conducted a survey of neighbors of the golf course and also residents of the city at large regarding what they want to see happen to the property. In May, Denver released the survey results in a 236-page report. It indicates that 78 percent of respondents wanted to "use the site to provide a variety of open space, recreation and/or other community-serving uses." The remaining 22 percent said they want to "keep the Park Hill Golf Course as 100% golf course." From the survey, Westside's Ho concluded that golf-course neighbors "want a mix of uses, affordable housing, a grocery store, local businesses and active parks."

But those opposed to development of the property argue that the survey's framing of golf course versus mixed use was flawed. During a May 18 steering committee meeting, Lisa Calderón, chief of staff for Councilwoman Candi CdeBaca, who supports the Save Open Space efforts, referred to the survey as "biased" and a "push poll" designed to elicit responses in favor of development.

The visioning process recommendations will likely come out later this summer. And come November, assuming both initiatives make it to the ballot, voters will be looking at two items on that ballot that sound almost exactly the same...but could lead to very different outcomes.

This game's still in play.
KEEP WESTWORD FREE... Since we started Westword, it has been defined as the free, independent voice of Denver, and we'd like to keep it that way. With local media under siege, it's more important than ever for us to rally support behind funding our local journalism. You can help by participating in our "I Support" program, allowing us to keep offering readers access to our incisive coverage of local news, food and culture with no paywalls.
Make a one-time donation today for as little as $1.